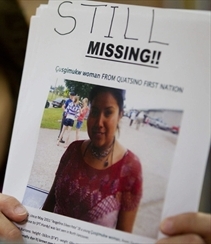 The Royal Canadian Mounted Police (RCMP), in collaboration with various police partners, launched a social media campaign as part of its efforts to help solve outstanding cases of missing Aboriginal women. The campaign will highlight specific cases of missing Aboriginal women and girls across Canada featured on the Canada’s Missing website, and encourages the public to help in solving these cases.

From October 3rd until October 12th, the RCMP will share information on these cases on its Facebook and Twitter accounts and call on policing partners and the public to take part in this campaign. The month of October was chosen to coincide with the Sisters in Spirit Vigil held by the Native Women’s Association of Canada each October 4th. Each case on the Canada’s Missing website is profiled with a poster that provides information about the missing individual and the circumstances of the case and can be printed for distribution.

How the public can help:

RCMP officers and investigators from our partner police agencies work tirelessly to solve cases of missing persons. In May, the RCMP released The National Operational Overview on Missing and Murdered Aboriginal Women, the most comprehensive and accurate account to date of missing and murdered Aboriginal women in Canada. This July, an awareness campaign was launched featuring posters on the topics of family violence and missing persons. The RCMP also works in consultation with the Native Women’s Association of Canada (NWAC) in order to raise awareness of the issue of missing Aboriginal women in Canada.

This initiative is an opportunity for communities across the country to be involved by sharing information that may generate tips for the investigating officers. With the public’s help, the RCMP hope to bring these women and girls home.