(ANNews) – Edmonton’s St. Rose Junior High School recently completed an important undertaking to enhance student understanding about Indigenous culture and to act as a catalyst in the school’s response to the call for reconciliation. That final phase included the blessing and smudging of five newly created mosaic designs that now rest on the walls of the school’s main staircase.

Unnamed, the five pieces are each symbolic of Indigenous culture and tradition. Each viewer of the art will have his or her own impression or understanding of what each piece represents, but the symbols themselves include an abundance of colour and are shaped to resemble a dreamcatcher, birds, turtles, moose and the Medicine Wheel.

Before the ceremony got underway St. Rose Principal, Barton Leibel addressed the gathering.

“We acknowledge that we are on the traditional lands of Treaty 6 and the home of the Métis Nation of Alberta’s Regional Zone 4. We also acknowledged the Inuit and all other diverse Indigenous peoples whose ancestors marked this territory for centuries,” stated Principal Leibel, who met with visitors shortly before the ceremony began. 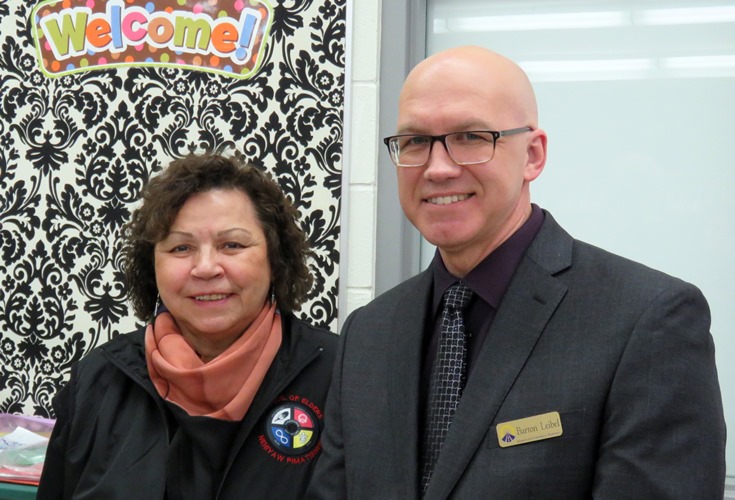 “We at Edmonton Catholic Schools commit to restoring and honouring the Truth and Reconciliation’s Calls to Action. We strongly believe that truth must be acknowledged to move forward to reconciliation. Together, we call on our collective communities to build a stronger understanding of all peoples who dwell on this land we call home.”

“This is now the second year that we have dedicated time and efforts to showcasing both First Nations art and First Nations-inspired art in our hallways, main office and student common,” noted Leibel. “This is a clear recognition of Canada’s Indigenous heritage and our dedication to the reconciliation of our Canadian community.” 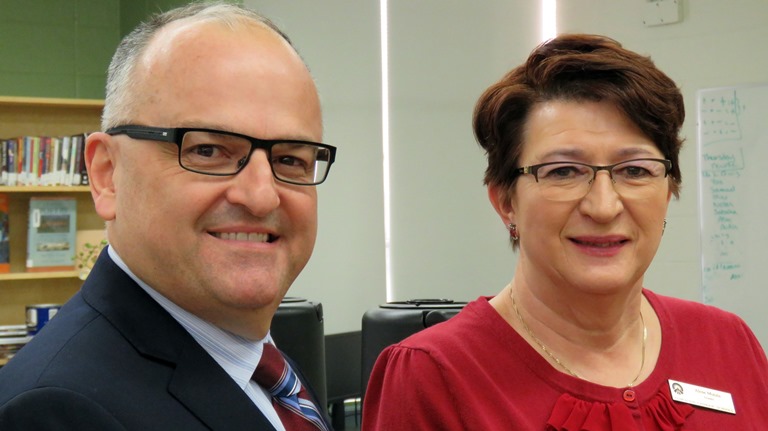 Elder Tony Arcand, a member of the Edmonton Catholic School Board’s Elder’s Senate for the past 13 years, spoke briefly about the blessing and smudging ceremonies, adding that one of the school’s Indigenous students would perform the smudge under his direction.

“It’s important for our young people to learn how to participate in ceremony,” said Elder Arcand. “We are getting older and sooner or later they will have to take our place at ceremony.” 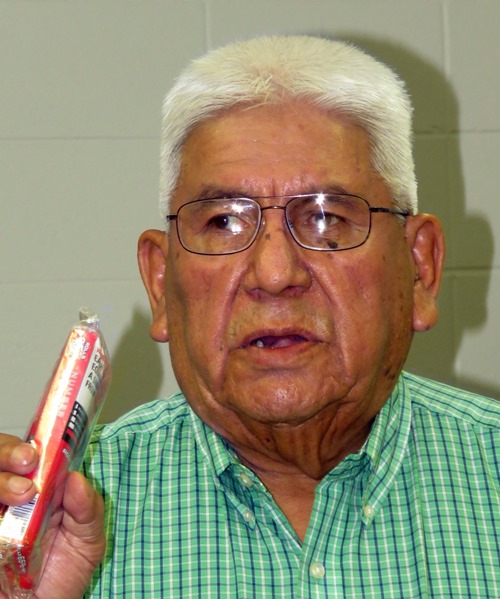 Asked about the traditional receiving of the tobacco he is offered before ceremony, he explained: “I actually quit smoking about 27 years ago; today I return the tobacco to Mother Earth. I dig a hole in the ground, preferably on the south side of a tree and I make a bed in there. I take about four big handfuls (of tobacco) and put it there in the ground while I pray. Tobacco is so important to Native tradition; some of the older Elders still grow their own.”

In closing, Elder Arcand suggested smudging the artwork and the school every four months to coincide with the seasons and the four colours of the Medicine Wheel, red, white, blue and yellow.

Principal Leibel said the project is a culmination of work that’s taken place over the last three years, work that began with participating in Blanket Ceremonies and Tea Ceremonies. 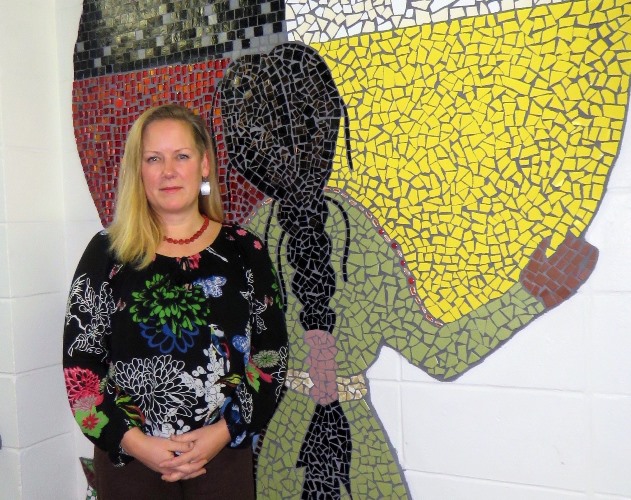 Artist Theodora Harasymiw created the original drawings and worked with students who added some of their own visions to the project.

“Last year we had a donation from a family to purchase art work. After talking to the students,” he noted, “they thought it would be nice, given the work we’ve already been doing, to purchase some First Nations art work.”

Toward the end of the process of procuring art work, he noted, the idea came up to add mosaics into the hallways and to maintain the Indigenous theme. The school sat down with visual artist and art educator, Theodora Harasymiw, and together they put a plan together to achieve that goal.

Harasymiw works in her studio but also, since 1997 she has been working as an Artist in Residence with schools to develop art programs which most often culminate in a permanent installation. 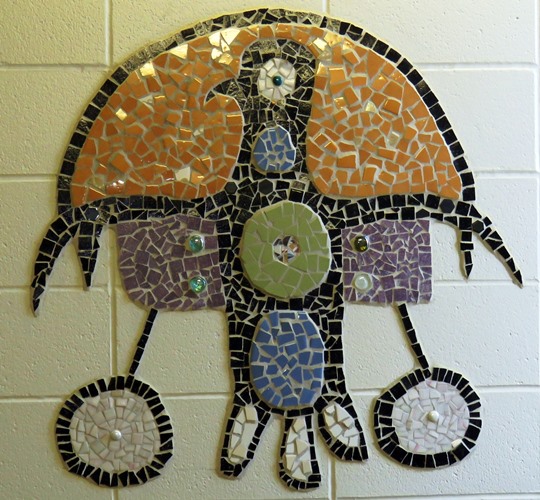 The project, which took about three and a half weeks to complete, began with designs and drawings and projections onto the walls where each piece was outlined and sketched. That beauty now resonates off the five mosaic creations. Each one is comprised of hundreds, if not thousands, of coloured and specially marked mosaic tiles. The array of colours is guaranteed to lift the spirits of everyone who uses the staircase.

Harasymiw said the project demanded a lot of attention and little time for leisure. The images she created were projected on the walls before being outlined. The students, who had some design ideas and themes they wanted to see incorporated into the mosaics, worked together with the artist throughout the project. Once all of the design work and tile manipulation was complete the pieces were set permanently into place. Students and parents both participated and parents played a big role in helping the artist as they worked together and painstakingly hand-broke every piece of tile used in the project. 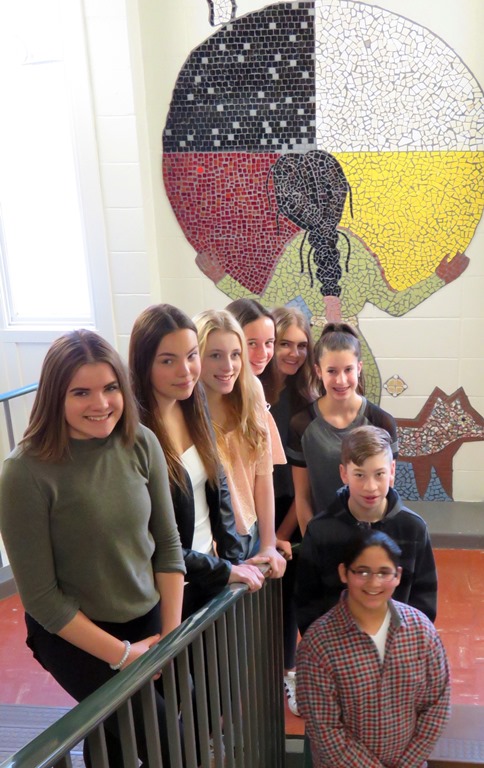 “It is quite an accomplishment,” noted David Donovan, shortly after he, with the aid of Elder Tony Arcand, completed his smudge of the five creations. Donovan is one of only five Indigenous students enrolled in the school. “When you walk down the stairs and you see the art it’s a good feeling, especially when you know that you participated in the making of it.”

Student Madison Bessett participated in the mosaic project and was earlier involved in the purchasing of First Nations art. The projects have given her a new perspective, one she hopes will resonate in others. She’s a 14-year-old Grade 9 student and says her involvement has brought a new awareness to her.

“Before I participated in these projects,” she admitted, “I didn’t know very much about Indigenous people or their traditions but since being involved I’ve gained new awareness and great respect for Indigenous people and their cultures and traditions. The more you talk and intermingle with one another the more you get to know about other people; I’m happy that I became involved and will continue to be. I think these mosaic murals are very important because they share a lot of information about Indigenous peoples, their cultures and their beliefs.” 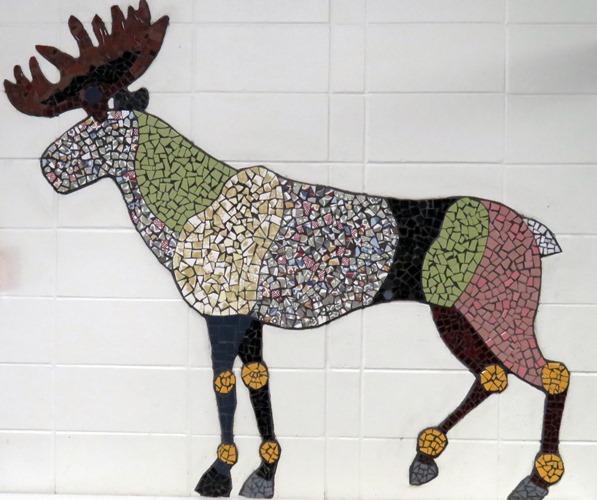 A lot of schools are becoming more aware of Treaty 6 and the importance of acknowledging the history and culture of the First Nation peoples.

Artist Harasymiw was pleased with the final results of the project and said her work is more in demand today because of the growing awareness by Canadians about the important role that Indigenous peoples have played in Canada’s growth.

“A lot more schools are becoming more aware of Treaty 6 and the importance of acknowledging our history and the cultures of First Nations people,” she said. “Dedicating this whole stairway, I believe, is a good start to having students become better aware of the Indigenous peoples, their cultures and traditions.” 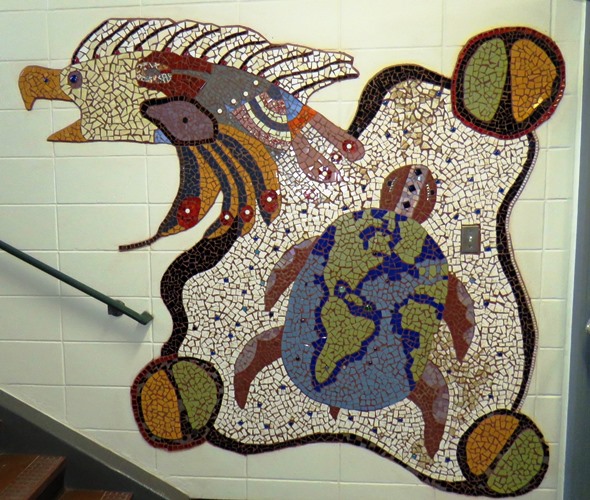 The feedback about the mosaic project, she said, “has been incredible. Understanding what the images mean, and what the Medicine Wheel represents are important and more and more people are learning about it and understanding that at one time this wasn’t Canada, it was called Turtle Island.” 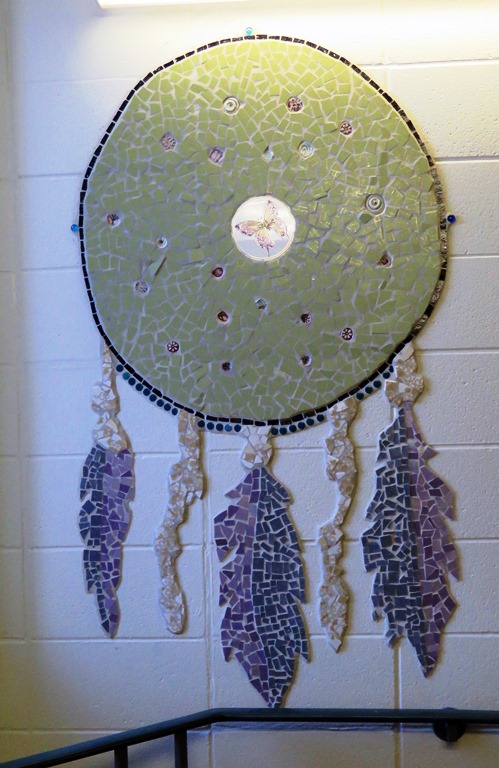 “We only have five,” nodded Leibel, “but to those five individuals this project has meant the world to them. They are walking with pride and it’s a great thing to see. Projects such as this have a way of releasing human potential because when you are proud of your heritage you are at a point where you can share all of your gifts with others.”

If there’s one thing Leibel said he’d like to see as a result of this meaningful project and the positive difference it is making, it’s more government commitment.

“I think the more that we can get this message out to government that we need to spend more resources on sending this type of positive message to everyone, the better it is – and I believe our communities will get involved in this as well.”