(ANNews) – There won’t be too many Alberta Native News readers who don’t recognize the name: Prince Charles School Fiddlers. That’s because this popular group of musically talented elementary school kids continue to train, perform and wow audiences throughout the Edmonton Region with a sound and charisma you may have to see and hear to believe.

“Yes, the students really enjoy learning, playing and showcasing their talent and we are very proud of them,” smiled Prince Charles School Principal Judy Toews, who’s been working at the school for more than two decades. Beginning as a Grade 3 teacher, she advanced to Vice Principal before becoming principal 12 years ago.

Principal Toews talked about the school, its programs, philosophies and initiatives and about the importance of parent engagement, something that she says has continued to grow with each passing year. She said most of the credit for the “outstanding support from the parents and the community” is a result of the school’s music program, an initiative that begins in kindergarten and continues through Grade 6. 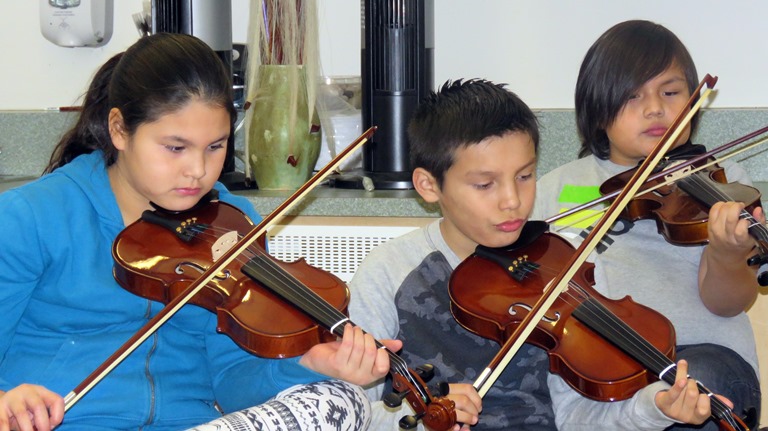 “Formal training begins in Grade 4 but every child has the opportunity to become involved in the music program. Many of the children who leave us when they enter Grade 7 do so at Westmount Jr. High. They also have an outstanding music program and our former students are enjoying it.”

One of the reasons that the students continue to excel is because when they join the Westmount music program they get their “old teacher” back at least once week. Judy Gatto has been the music teacher at Prince Charles School for more than a decade. Several days a week she works with her music-teaching partner, Gary Lee, who also works with kids in other Edmonton schools, including Westmount Jr. High. 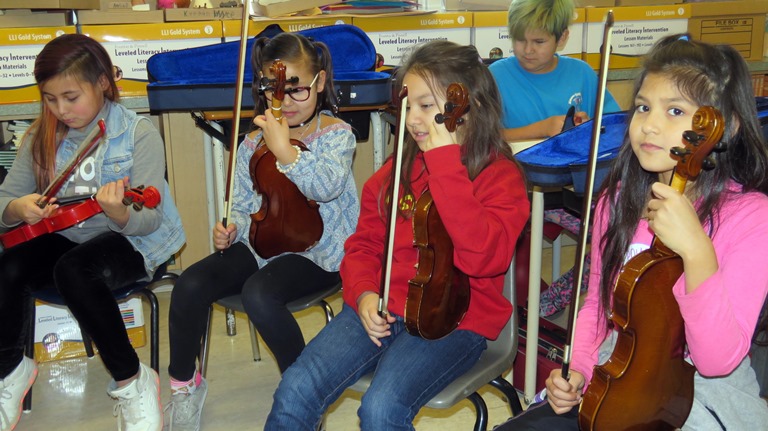 “I’ve been participating at Westmount for a couple of years,” noted Lee, “and I really enjoy it; seeing the kids move from elementary to Jr. High and watching them transition into even better musicians and young men and women is a wonderful thing.”

Lee has been working with Gatto and the Prince Charles School for more than 10 years and says he’s never ceased to be amazed with the students he helps to teach, noting that this year’s “beginner students are making a lot of progress; they’re all working very hard and both Judy and I are very proud of the way they are caring for their instruments.” 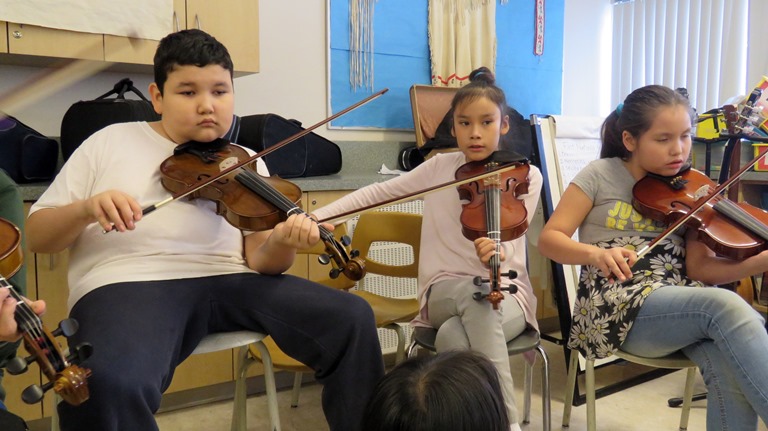 He praised the grade 6 students, many of whom participate in performance outings and trips to various schools and other venues throughout the region, where they are known as The Prince Charles Fiddlers.

In addition to the fiddle, some students also play guitar and mandolin and others have very special abilities and talents for their young age. They also work hard.

“Our Grade 6 students are very special in that they continue to meet every goal and have become very accomplished,” praised Lee. “Every time they perform for the public, it blows me away to see just how good they really are.” 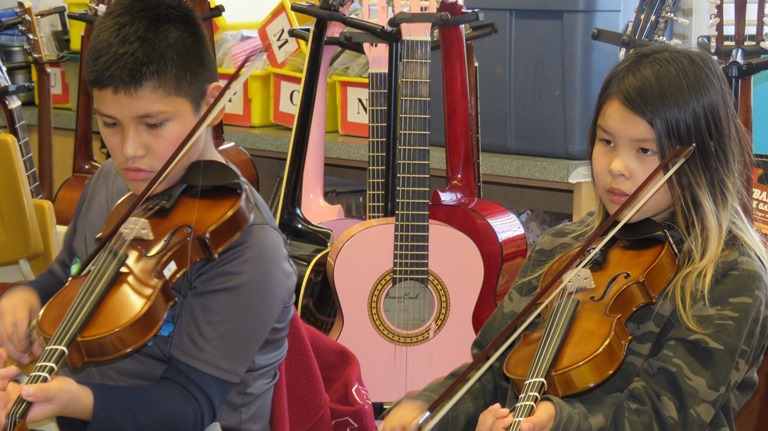 Gatto also had encouraging words and noted that this year she has 26 Grade 4 students in her class. There are about 15 beginners from other classes.

“We have a dynamite group of beginners this year,” she grinned, noting, “they are working so hard!” 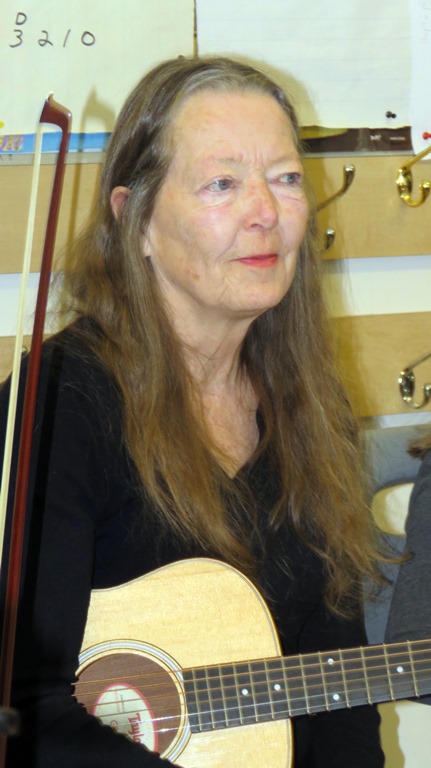 There’s also a large group of Grade 5 and 6 music students, many who have previous experience playing a musical instrument.

The school holds various events during the year, something that Principal Toews says “we do to encourage parents to come in to the school to connect with the staff and to enjoy the performance that accompanies our feasts and other social activities. And of course, every parent wants to watch his or her child perform. It’s a fun time for everyone.”

On November 7 the school participated in the annual Aboriginal Family Night celebration, or Witchitowin, an initiative developed via a 2006 partnership between Edmonton Public Schools and the Bent Arrow Traditional Healing Society.

“It was a wonderful evening and enjoyed by more than 200 people,” smiled Toews. “It was a really good turnout and a positive sign for the future. The kids really preformed well and they received a lot of applause and praise.” 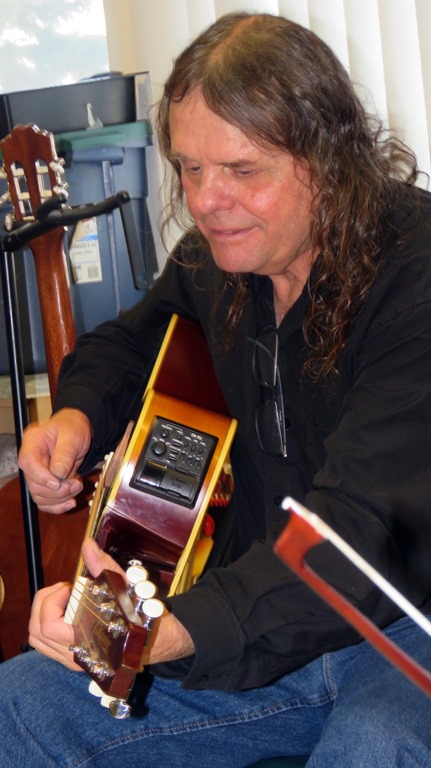 The annual gathering of families, teachers and students is designed to bring families and staff together at the school where they will be in a safe, comfortable environment.

“Building positive partnerships between the school and our families directly impacts how successful our students will be – academically and socially,” emphasized Toews in a message to parents. “We know that all children learn differently and that they bring many learning strengths to the classroom. In developing your child’s bright future, Prince Charles staff will be striving to build on your child’s strengths while supporting them to stretch and develop new skills that will guide them in the 21st Century.  We cannot do this work on our own – our students’ continued success relies heavily on parents supporting their children, encouraging them to do daily home reading and talking to them about what they are learning.”

Prince Charles School has a great atmosphere that is conducive to a great parent-teacher-student relationship. “The school is warm, nurturing and respectful,” noted Toews, “and with continued parental involvement we are a team working together to accomplish all that we dream for our children.”

Toews also notes that “the Code of the Golden Feather is the foundation of our community.  We practice Respect, Humility, Honesty and Integrity each and every day in all that we say and do. We are also a Leader In Me School and support all of our students to be leaders.  Staff strive to support each child to find and develop his or her strengths to be positive change agents in their school, their family, and their community.” 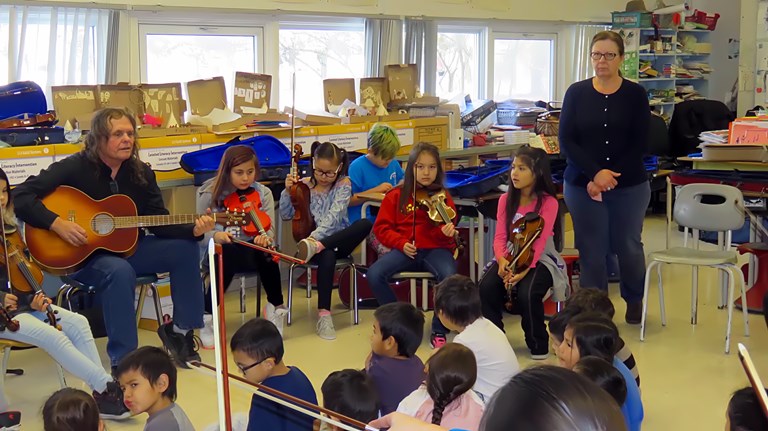 The focus of the music students is currently on preparation for the Christmas Concert and playing for their families. “The excitement is building,” assured Gatto. “We’ve already had several performance dates this fall, the last was with Métis Week in November at Grant MacEwan University.”

“Judy and Gary do an outstanding job,” noted Toews, “not only with the music program and the children who participate in it, but also throughout the community as they talk about and promote our school and the students and help organize their next performance.”

“Playing music is fun and it makes you feel good,” added Gatto. “No matter what’s going on in your life, playing music makes you feel better. Our fiddle and guitar students learn at different speeds and in different ways; we just do our very best to make the music program a positive experience.” 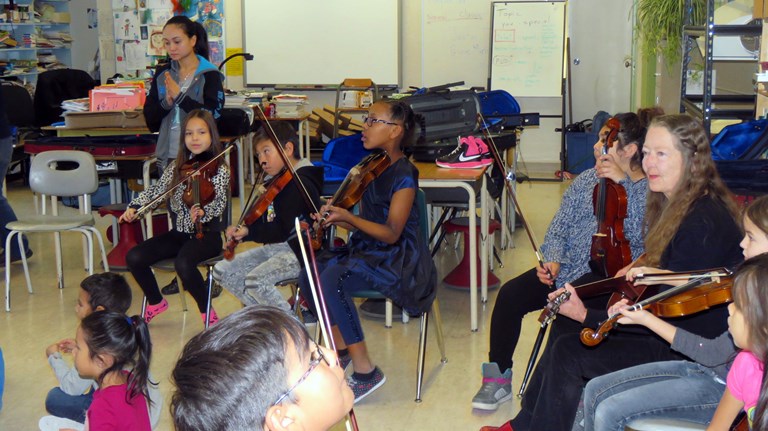 Research, she assured, has shown that playing music has many benefits for the students.

“I have certainly seen these benefits over the years,” she concluded. “Not only do the students learn to play an instrument, they learn how to play together in a group; they also learn a great deal about themselves and about the importance of working together as a team.”

Over the past three years the fiddle-playing students at Prince Charles School have played in dozens of venues and in front of thousands of people. They’ve “wowed” the crowds at venues that include everything from National Aboriginal Day outings to music jamborees, First Nations conferences, Edmonton’s Truth and Reconciliation hearing, Fort Edmonton Park and more. They’ve even joined the Edmonton Symphony Orchestra for two separate performances.

Prince Charles School is located at 12325 – 127 Street in Edmonton and it is part of the Edmonton Public School District.