(ANNews) – Academy’s 2017 Winter Feast took a different twist this year when instead of Principal Fred Hines, two of the school’s students, Shaunteya Eaglechild (Grade 10) and Theo Auigbelle (Grade 11) made their way to the podium as co-emcees who led the gathering in prayer.

In her opening comments Eaglechild acknowledged that “we are on Treaty 6 territory, a traditional meeting ground, gathering place and travelling route of the Cree, Blackfoot, Saulteaux, Métis, Dene and Nakota Sioux. We acknowledge all of the many First Nations, Métis and Inuit peoples whose footsteps have marked these lands for centuries.”

She delivered the morning prayer in her native Blackfoot language before conceding the podium to Amiskwaciy Elder Francis Whiskeyjack, who smiled and said, “It is certainly a nice thing to hear our young people speaking their own languages.” 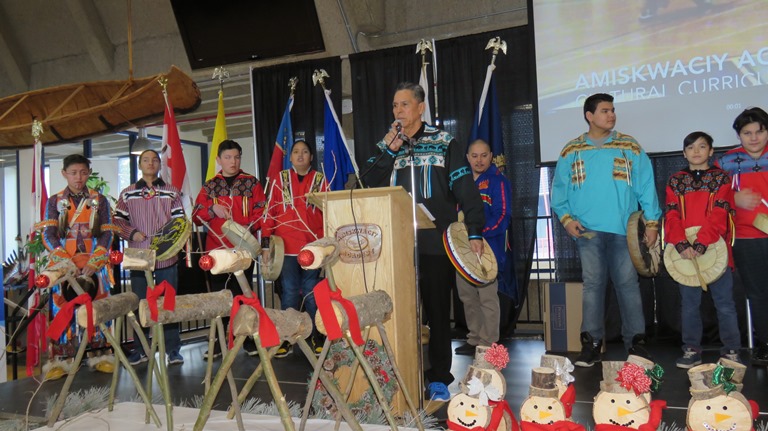 Amiskwaciy Elder Francis Whiskeyjack address the large gathering before he and the Amiskwaciy Singers performed a couple of songs.

Elder Whiskeyjack, social teacher Terris Mah, Elder Jeanette Lean and about 15 students accompanied the emcees on stage before beating their hand-held drums and singing in harmony to the delight of the 400-plus people who came to celebrate culture, tradition, family and the upcoming holiday season. A rousing round of applause echoed throughout the building when the group had finished its performance.

A Blanket Ceremony honouring Harvey Succaro was also an important part of the feast. (Click here to read about it).

The academy presented an interesting and memory-filled slideshow that showcased the school and many of its achievers, role models and difference-makers and various events that have been shared and experienced there. EPSB Board Chair Michelle Draper was invited to the podium as the 2017 Winter Feast’s first speaker. 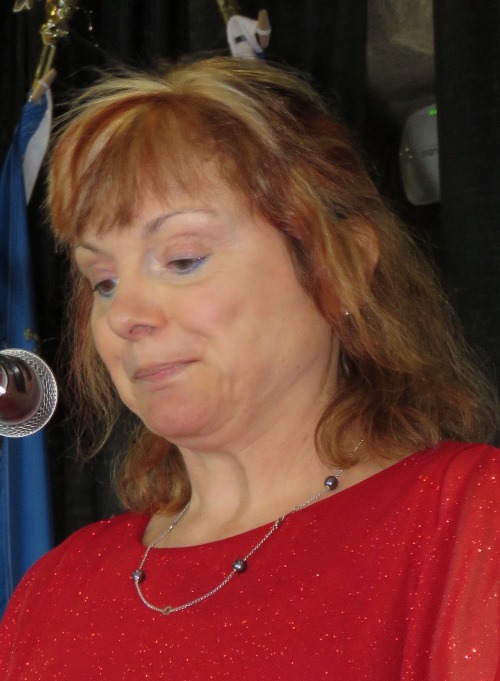 “It’s really wonderful to see the community come together to celebrate the season and their cultural identities,” she began. “It reflects Amiskwaciy Academy’s ongoing commitment to connect students with Aboriginal cultural teachings. I understand that this is an important time of the year to get together, to share stories and create memories, something that the slideshow reflected so nicely. In addition to hearing the stories of times passed, I hope that today we will be creating memories that will become the stories of tomorrow. I also think about what your future stories might say and that you are also able to thank those who have supported you throughout the years. The support you receive from your teachers, your Elders, your family and community makes your unique educational experience at school possible. It is because of the dedication of these people that Amiskwaciy Academy is able to nurture not only your academic success but also your spiritual and emotional well-being.” 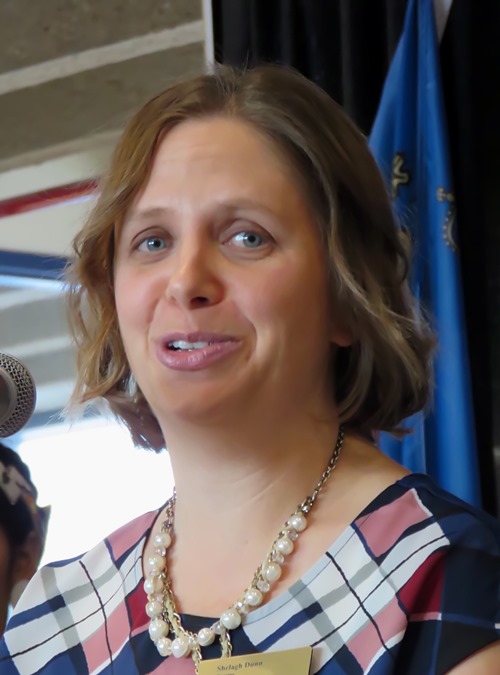 Trustee Shelagh Dunn (Ward B), said she was “honoured to be here at Amiskwaciy Academy,” noting, “this is my first winter feast and I am so happy to be here; it is a special time to share, to reflect and to celebrate with one another.”

Minister Eggen brought greetings from the province from Premier Rachel Notley and offered a “sincere thanks to both Amiskwaciy Academy and the Edmonton Public School Board for your leadership in how we can move forward teaching First Nation, Métis and Inuit languages and traditions, not just here in Edmonton, but right across the Province of Alberta as well. 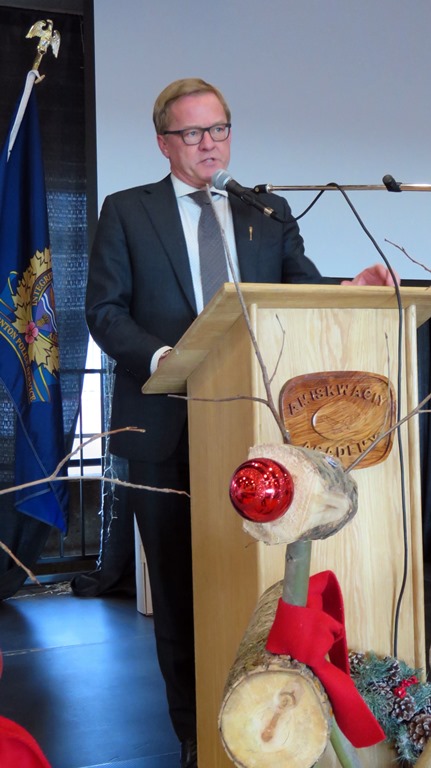 “As we know from a dark period in our history – residential schools, the 60s Scoop and so forth, it was the Elders that kept the cultures, traditions and languages alive. But here now in 2017 we reach out as the Government of Alberta to help, to work together to ensure that language and culture are not just existing, but thriving in all of our schools across Alberta. To building curriculum and language through cultural awareness training, not just for teachers, but for the whole public service, our government is committed to the tenets of the Truth and Reconciliation (Calls to Action) and the United Nations Declaration as well.”

The minister also noted that the province is working hard to ensure that all Albertans “have the education (and) the cultural understanding of First Nations, Métis and Inuit tradition here in our province.” 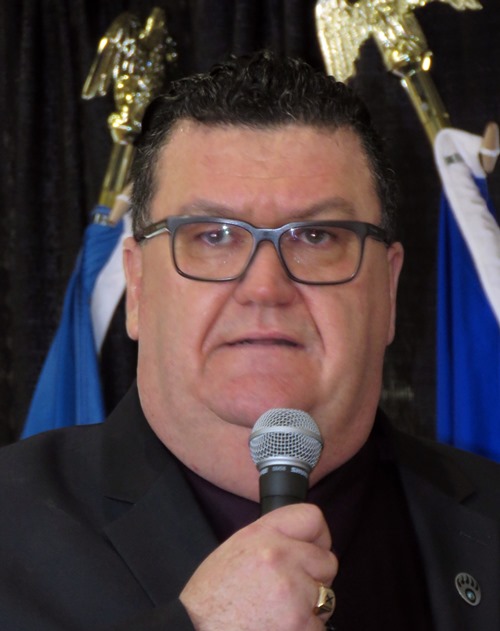 Principal Fred Hines, noting that he realized how busy everyone is at this time of year, thanked the large audience, noting “we have a lot of support here at Amiskwaciy Academy from our community and from our community sponsors; it’s a great honour to be able to work with all of you. We really appreciate it; it’s all this coming together that helps make sure our students are successful here.”

Just before the clock struck noon Elder Francis Whiskeyjack took to the podium where he blessed the food and offered a prayer. Soon after, Theo Augibelle announced that Elders and special guests could begin making their way to the buffet lines.

The feast included delicious turkey, scrumptious ham, tasty mashed potatoes soaked in a rich brown gravy, salad, dessert and all the trimmings. Before dinner got underway and immediately following the meal a number of door prize draws took place. When the draws were complete the winners took home one of the 15 or so school shop-made gifts which included decorated snowmen and some nicely crafted reindeer.

The entire outing proved to be another wonderful Amiskwaciy event, talking to old friends, meeting some new ones and enjoying the company of so many upbeat and like-minded people. The two emcees for the 2017 Feast did an outstanding job; the event’s agenda moved along on time and the two students were like polished professionals. 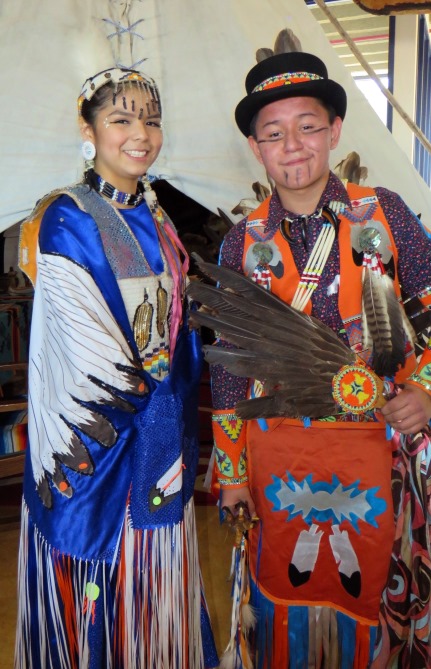 Eaglechild, who resides in Edmonton during the school year, is originally from the Kainai Piikani Nation in southern Alberta. She’s in Grade 10 and it’s her first-year at Amiskwaciy Academy. Augibelle has been attending for three years and makes his home on the Alexander First Nation near Morinville.

“This is the best school I have ever attended,” stated Eaglechild, with her enthusiasm obvious in both her smile and comments. “I was a little nervous when I came here in September but as I got to know everyone and realized just how wonderful everyone is here – students, the principal, the teachers, Elders – it is all very inspiring and it makes you want to apply yourself and do well. It’s especially good for me because I came from a school where I wasn’t doing very well, and since coming here to Amiskwaciy, I am now doing quite well. I’ve never been in a school like this one; culturally, spiritually and emotionally it is truly wonderful. I am doing a lot of things now that I really hesitated to do or didn’t do before coming here – dancing like I did today in front of all these people is one of them. I was a bit nervous at first but now I feel great!” 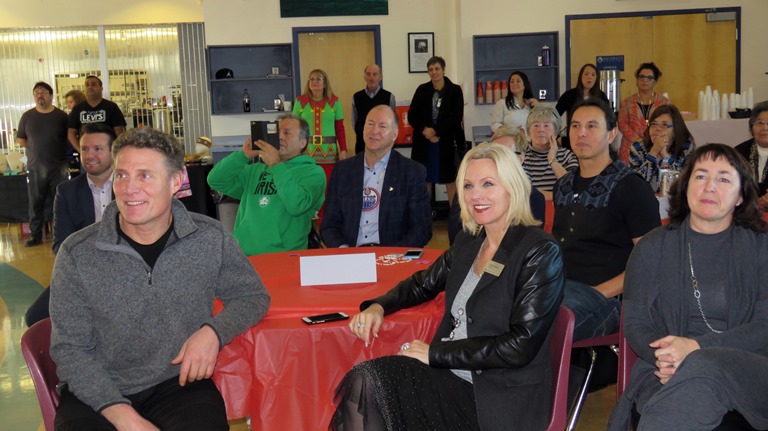 Auigbelle lives on the Alexander First Nation and travels back and forth to school.

During his first year, he said, “I was a bit lonely in the beginning because I really didn’t talk to too many people but it wasn’t long before I got to know the others and made some friends and it’s helped me a lot. I’d recommend Amiskwaciy Academy to anyone because it’s a great school with a caring environment.”

Amiskwaciy Academy is an Edmonton Public School program of choice that provides solid academic programming within an Aboriginal context. The school, which is open to students of all backgrounds and cultures, honours the Aboriginal community and reflects its cultures, values, ancestral knowledge and traditions in achieving excellence in education.

Amiskwaciy Elder Francis Whiskeyjack address the large gathering before he and the Amiskwaciy Singers performed a couple of songs.