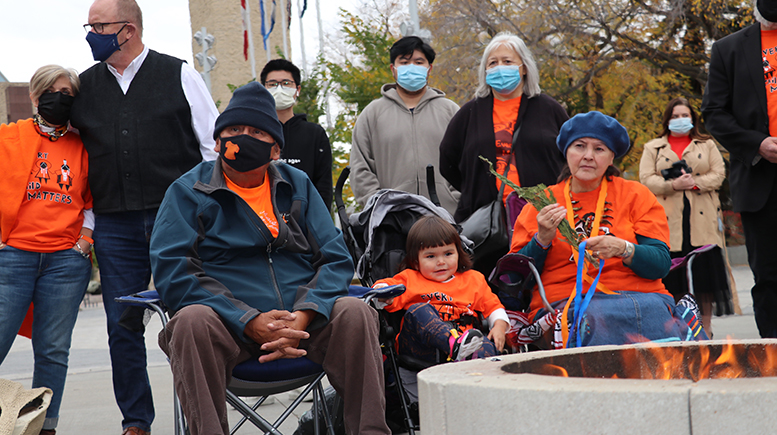 Nehiyaw (Cree) Elders Jerry and Joanne Saddleback served as the ceremonial facilitators, providing the spiritual element at City Hall Plaza on the National Day for Truth and Reconciliation in Edmonton on September 30. Photos by Terry Lusty.

(ANNews) – For the Indigenous population of Turtle Island (Canada), September 30, 2021 was not your typical day like any other day. On the contrary.

Across Canada, from coast to coast to coast, there was listening, learning and commemoration as Indigenous and non-Indigenous supporters rallied around the flag of reconciliation, to acknowledge and honour residential school survivors, those who never made it home and those who were victimized and traumatized – in many instances severely for the duration of their lives. 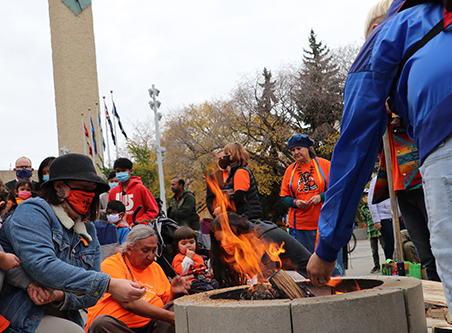 A Sacred Fire was held in Edmonton on September 30. Elders explained the significance of “feeding the fire” with offerings of tobacco and described some of the issues affecting residential school survivors and their families. The ceremony also included prayers and a drum song.(Photos by Terry Lusty).

Particularly significant about September 30 is the fact that it has become Canada’s most recent federal statutory holiday, now known as the National Day for Truth and Reconciliation.

It is, according to Prime Minister Justin Trudeau, ” a day to reflect on the impact of residential schools, their families, their communities and all of those who never made it home.”

And although Alberta’s premier, Jason Kenny did not declare the national holiday a provincial one, the City of Edmonton and the City of Calgary did so for all of their employees, including police and libraries.

Parliament to its credit, followed through with recommendation #80 of the 94 Calls to Action that were part of the Final Report of the Truth and Reconciliation Commission, headed by Senator Murray Sinclair. The report was presented to the feds in 2015 at the Closing Ceremonies of the seven TRC National Gatherings across Canada. And, thus, recommendation #80 was duly enacted on June 3rd, 2021, by parliament as Bill C – 5.

Throughout the country there were ceremonies, sacred fires, smudges, and other gatherings – both live and virtual – to help make the day meaningful.

In Edmonton, a Sacred Fire was held at 10 a.m. at City Hall Plaza with Elders Jerry and Joanne Saddleback officiating by the log fire. Also in attendance were other Elders, community members, civic leaders and staff, and then Mayor Don Iveson, along with his two children.

Following Elder Jerry’s opening prayer, he, and dozens of those in attendance “fed the fire,” depositing offerings of tobacco while young children on the sidelines drafted words of “reconciliation” onto large sheets of construction paper.

Following the fire ceremony, a few of the Elders shared brief stories about residential school experiences. Mayor Iveson greeted the crowd warmly, expressing his ongoing support for survivors and commitment to the reconciliation process which he, as an ‘honourary witness’ at TRC gatherings, promised to continue.

The event concluded at approximately 1:30 p.m. at which time the crowd dispersed, many to make their way to one or more other Orange Shirt Day events scheduled to happen at numerous other locations throughout the city and elsewhere.

Click here for the photo gallery (Photos by Terry Lusty).