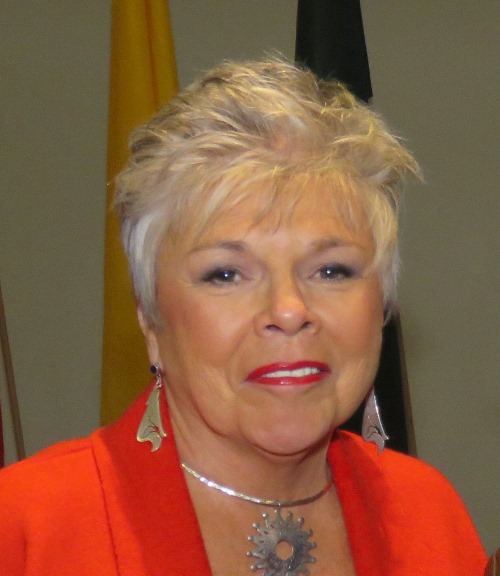 (ANNews) – In the fall of 1998 the University of Alberta introduced its first Visiting Lectureship in Human Rights series, a new and innovative program that today is envisioned as one of the preeminent annual events held at the University. The initiative invites individuals and organizations that have made outstanding contributions in the field of human rights protection to deliver a major public lecture in Edmonton. During their visit the guest speakers are also invited to attend other significant events at the University of Alberta, the City of Edmonton and within the Province of Alberta.

On November 28, 2016 the university’s Deputy Provost, Wendy Rodgers, introduced the program’s latest guest lecturer, Roberta Jamieson, the well-known, and highly respected head of Indspire, a Toronto-based charitable organization with a mandate dedicated solely to raising the funds necessary to deliver programs that provide tools for Indigenous peoples. Since her appointment as President and CEO of Indspire in the fall of 2004, Jamieson’s leadership and vision has propelled the organization forward and has been named by the Financial Post as one of the top 25 charities in North America. In 2015-16 Indspire disbursed over $12 million through more than 3,790 bursaries and scholarships to Indigenous students across Canada. The program has increased its disbursement sevenfold since Jamieson’s appointment.

After acknowledging Treaty 6 Territory and thanking Indspire laureates Muriel Stanley-Venne and Marilyn Buffalo for the honouring ceremony they performed before her lecture, Jamieson took to the podium and began by noting how much of an honour it was to have been invited by the University of Alberta to participate in the important human rights-based lecture series. 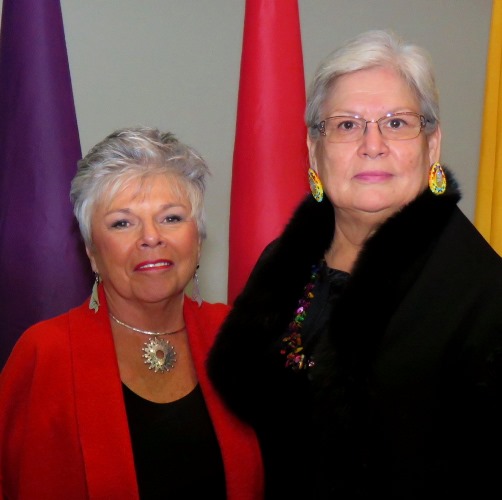 ate in this visiting lectureship,” she began. “I want to take this opportunity to engage in a dialogue about how we can successfully meet Canada’s most fundamental, greatest, deepest, longest human right challenge that is the relationship between Indigenous people and the rest of Canada.”

Speaking frankly about that relationship, Jamieson told the audience that her “goal tonight is to do some serious consciousness raising” and to “make certain that we all know how we got here and I want to encourage each of us to take part in implementing a solution.”

She alluded to the importance of relationships, noting that Indigenous peoples “are all about relationships, relationships that begin with the most important one, the one we have with Mother Earth, the relationship that provides us with the food we eat, the water we drink, the medicines we need.” 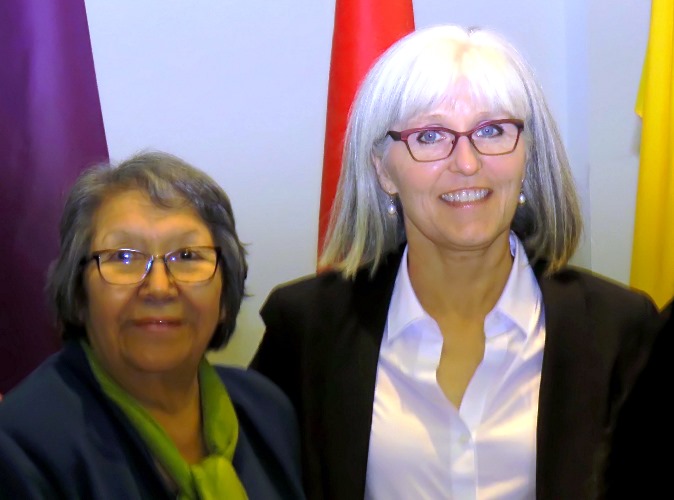 “Each one of you here today, your families, your life in Alberta, our being here together tonight, is a consequence of those treaties and that treaty relationship,” she explained. “We should all be conscious of that fact so that we can put our relationship with Indigenous peoples in context so we can think about human rights in that context. We have centuries of relationships with those we welcomed, sheltered, protected, shared our knowledge with, fought battles for and above all else, shared our land with, our resources, our friendship – all through this time and to the present day.”

Roberta Louise Jamieson is a Mohawk woman and a member and resident of the Six Nations of the Grand River Territory. Once introduced as “a vocal advocate for the preservation and enhancement of human rights, Indigenous rights specifically, as a part of realizing Canada’s potential,” Jamieson was the first First Nations woman to complete a law degree. She has been a Commissioner of the Indian Commission of Ontario, an Ombudsman and an elected Chief of the Six Nations of the Grand River Territory. Her people signed their treaty with the Crown in the 1780s, more than 100 years before the signing of Treaty 6, and thus her people have had many dealings with non-Indigenous members of society, including the Crown, which is assigned to protect and honour treaty rights – but she noted during her lecture, that is not always the case.

“What we have generally faced in return, with some exceptions,” she noted, “has been pollution, discrimination, rejection, marginalization, racism, violations of human rights and a propensity to aggressively demand justice. We’ve had our land taken, our money, even our children.” 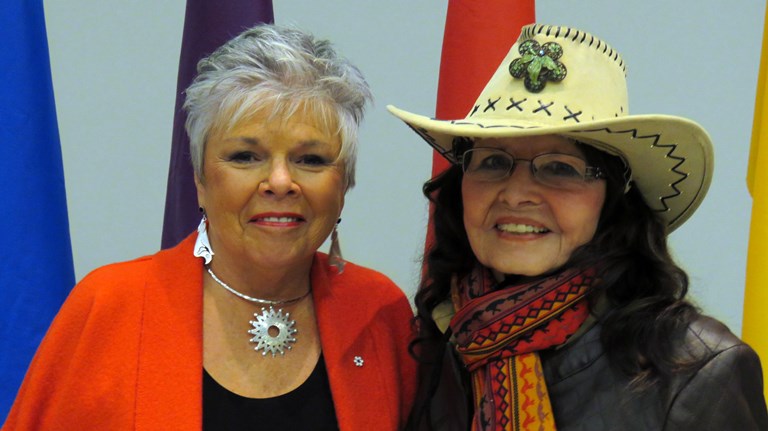 She went on to note that over the years, governments have also “aggressively” forced Indigenous peoples to follow their politics, their religions, their beliefs – now they come to us and say they want to reconcile. I can tell you that many of our people are wary of those who come to tell us about the wonderful relationship they are going to offer us – on their terms. We keep our ears open, hoping to hear that they want to work with us in developing and honouring mutually beneficial relationships. The good part, the amazing part, is that in spite of this history we are still open to listen and that we are still willing to share, again. What we are seeking though, are respectful, collaborative, bilateral, reciprocal relationships that are relevant and productive to both parties.”

During her one hour lecture Roberta Jamieson delved into many aspects involving human rights and the importance of retaining and maintaining languages, cultures, spiritual beliefs and traditions. She talked about the residential school experience, the damage it created and the long-lasting effects that that experience has had on Indigenous peoples across this nation and beyond. She spoke about poverty, education, housing, employment and other inequities faced by Indigenous peoples. She also cautioned the audience that though she would like to see every Canadian become involved in the process of realistic and meaningful reconciliation, “you will have to be a bit patient with us because the first thing we are going to experience is suspicion – and I think you know why.” 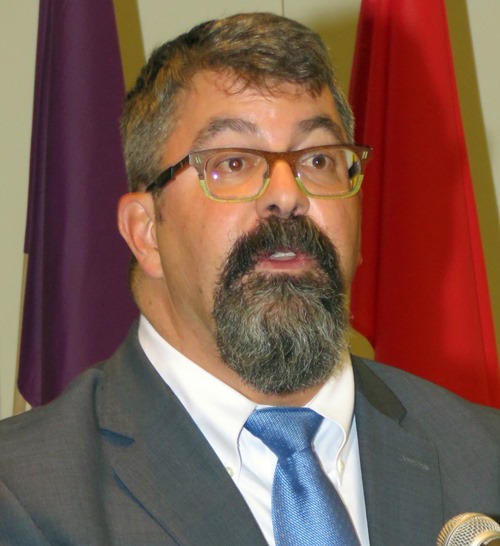 “For a century,” she noted “we all lived in peace. Then 100 years later when Canada asked for and was given permission to colonize and thus form the country we call Canada,” things changed dramatically and drastically.

“It began,” noted Jamieson, “when Sir John A. MacDonald passed a law that declared that Indigenous people were not civilized and were thus incapable of managing their own affairs, or raising their own children and we became wards of the government. This happened with an act that was called ‘An Act of the Gradual Civilization of Indian,’ and from that moment forward became a legalized system of systemic racism and the continued violation of human rights.”

Jamieson explained how that Act, which declared Indigenous peoples as not being fully human, set in motion a belief that Indigenous peoples are inferior and not worthy of either respect or dignity. Other proclamations, as well as recommendations and harsh words from the United Nations about Canada’s treatment of its Indigenous citizens, went unheeded; instead the government introduced the Indian Act, an archaic document that continues to vilify Indigenous peoples.

“It is strange to note that Indigenous peoples were civilized enough and human enough to give up their land and resources in partnerships, but not civilized enough to look after their own internal affairs,” Jamieson commented. “We could, of course become fully human, but only if we gave up being Indigenous.”

During her lecture, Jamieson covered far more ground that we can include here today; to learn more, see the indspire.ca website or type her name into your internet browser where you may come across one of the many dialogues she’s had with Canadians during recent years.

Jamieson is a learned scholar and a brilliant speaker and the standing ovation she received from a predominately non-Indigenous full house is indicative of the fact that Canadians are tired of government’s penchant for belittling Canada’s Aboriginal communities and peoples. Her words were clear and her delivery outstanding; hopefully those in attendance and those who hear her speak at other venues will stand up and speak out whenever they see Indigenous people being slighted or mistreated, be it by government, society or individual action. Click here to listen to her inspirational and educational lecture in its entirety.

Roberta Jamieson has earned numerous awards, including, most recently, the Testimonial Award from Canada’s Public Policy Forum and the Council of Ontario Universities’ 2014 David C. Smith Award, as well as 25 honorary degrees. She has been named three times to the Women’s Executive Network’s Top 100 list. And she is an Officer of the Order of Canada.