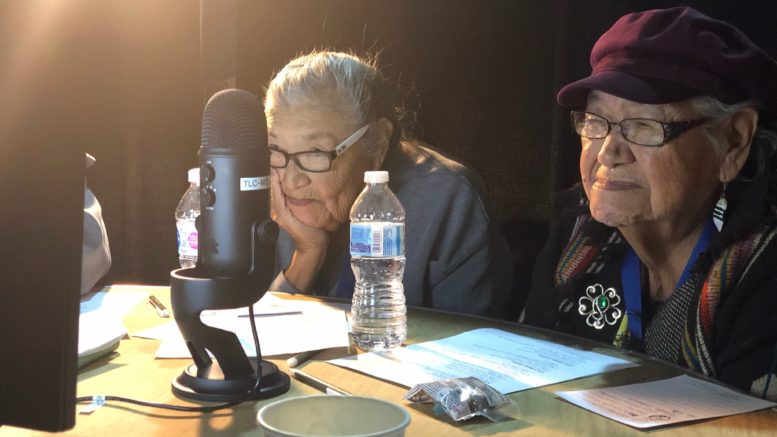 (MORLEY, Alberta) – The Stoney Education Authority with The Language Conservancy is hosting a Rapid Word Collection (RWC) event in Alberta that started earlier this week (September 23) to help preserve the Stoney Nakoda language. The event is located in the Chill Room at the Stoney Nakoda Resort Monday-Friday from 9am-4:15pm.

The number of fluent Stoney Nakoda speakers is dropping, making the language highly endangered. Most dictionaries take about 20 years to develop, but with fluency rapidly decreasing, the Stoney Nakoda nation doesn’t have the time to wait.

A Rapid Word Collection event is a revolutionary new method of dictionary development created by The Language Conservancy. During two weeks of word collection, fluent elders from the tribe are gathering together with linguists in Morley to record and transcribe thousands of words. The words are generated by going through a core list of 17,000 topics that will allow the elders to share words relating to each topic.

Dictionaries are a core tool to develop other materials that help revitalize dying languages. The words collected during the event will be gathered into an online dictionary that will help the Stoney Nakoda develop curriculum to teach the next generation fluency in their native language.

The Stoney Nakoda are among a number of indigenous tribes whose languages are highly endangered. The RWC dictionary development method has been used by other tribes, including the Crow and Ho-Chunk Nations. In the past year, the Crow and Ho-Chunk Nations hosted a Rapid Word Collection with the Language Conservancy that generated 15,000 and 13,000 words in just two weeks, respectively. Past success with this method brings hope to the Stoney Nakoda of keeping their language alive.

The Language Conservancy is a nonprofit organization leading the preservation and revitalization of indigenous languages and cultures by developing learning materials, hosting educational events and raising awareness for the importance of sustaining endangered languages.