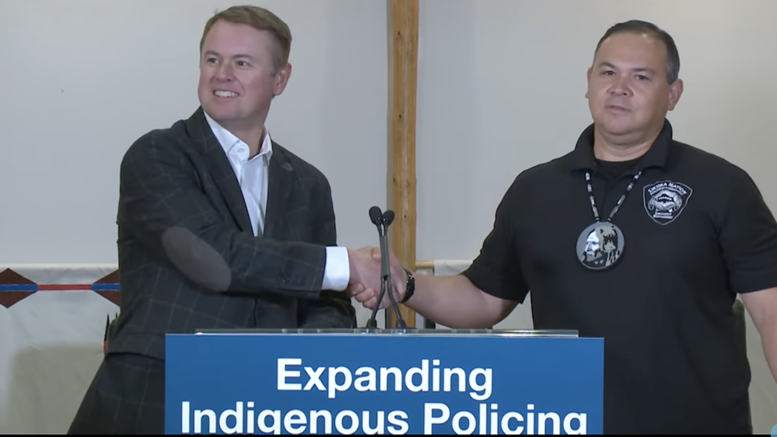 (ANNews) – The provincial government is putting its support behind the establishment of an independent Siksika Nation police force.

At a July 18 press conference, Justice Minister Tyler Shandro announced a memorandum of understanding between the provincial government and Siksika Nation to begin creating a funding formula for establishing a Siksika police service.

The nation has already undergone a feasibility study and produced a business case for their own police force, but Shandro blamed the federal government for having its First Nations and Inuit Policing Program paused while under review since 2019 for delaying the nation’s application.

“A guiding principle of this MOU is that improving the safety and the security of the Siksika Nation members will come from developing programs and services that are Siksika Nation-driven, and establishing a self-administered police service in Siksika is a major step forward towards this goal,” the minister said.

Siksika Chief Ouray Crowfoot pointed out that Gelichen, a hamlet of about 200 people next door, has an RCMP force of 24 officers. “Yet right across the tracks we have a nation of 8,000 people, approximately 4,500 on reserve, and we don’t have a police force,” Chief Crowfoot said, adding that this inequity would be unacceptable if the situation were reversed.

Having its own police force would go a long way to ensuring Siksika has “equitable partnerships” with the federal and provincial governments, he added.

“When you don’t have a force on the nation that knows the nation, knows the roads and knows the communities, when you’re talking about response times, those critical minutes and seconds can make the difference between going to the hospital, going to the police and going to the morgue,” Chief Crowfoot said.

“And our people are going to the morgue a lot more than they should be,” he added later in the conference.

The nation has been in ongoing talks with the federal government, Crowfoot said. “We realize it’s not like turning on a switch, not having a force one day and having a full force the next day,” he said.

Shandro said this initiative is entirely separate from the government’s suggestion of establishing a provincial police force to replace the RCMP.

In a news release announcing the MOU between the province and Siksika, Indigenous Relations Minister Rick Wilson said a local police force will “foster self-determination and community-led solutions.”

The UCP government announced last month that it would provide $30,000 to assist municipalities and First Nations who want to establish their own police forces in preparing a business case.

Siksika Nation previously had its own police force, which was disbanded in 2002 after the federal and provincial governments cut funding due to allegations of corruption.