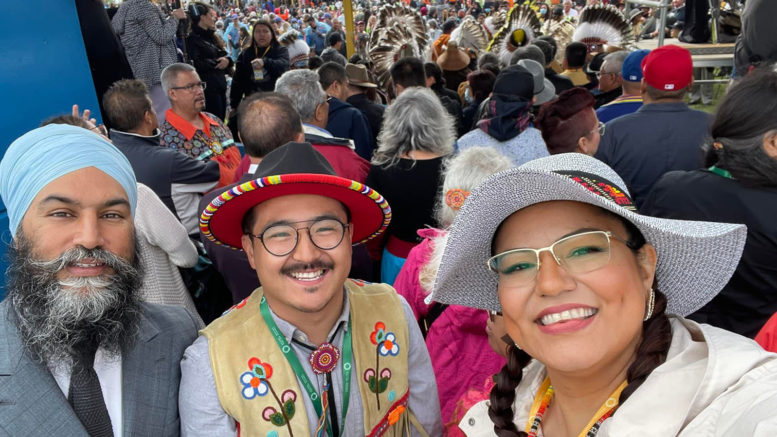 (ANNews) – In a passionate speech on July 25 in Maskwacis, Pope Francis apologized for the heinous abuse inflicted on Indigenous children at church run Indian Residential Schools, and he asked for forgiveness.

The responses were divided, but it was undeniable that the Pope’s apology, delivered at the site of the former Ermineskin Indian Residential School, was dramatic, powerful, and reverberated through the community.

Samson Cree Nation Councillor Katherine Swampy said that the Maskwacis community was divided by the pope’s visit and by his apology; some people were happy and grateful the pope chose Maskwacis for his apology while “others were very angry and still feel the pain from Residential school. There were very polarized discussions regarding the visit,” she added.

Many in the community chose not to attend the event. In a community of over 20,000, and a venue with the capacity to fit 9000, many of the seats were empty.

“9000 registered to attend, but many seats were empty,” said Swampy.

“Personally, I had so many mixed feelings.

“Initially I started out with anger and resentment. I stood up against systems of oppression and genocide as soon as I was old enough to understand what it was. I was raised Roman Catholic; how could I not be,” said Swampy.

“My mom was raised in residential schools. I have nothing against Jesus and God, but the church, the Roman Catholic Church, utilized religion for colonialism all around the world.”

She said this entire experience was different, and difficult for her because it represented so many genocides over the generations, not just against Cree people but against many Indigenous cultures around the world.

“My mom and sister were excited about the pope’s visit, it was so special for them,” said Swampy.

“But personally, I was thinking about staying away, because of how conflicted I felt.”

“I mean as a leader, I must meet with dignitaries of all sorts, especially those who continuously oppress my people, for example, the Canadian government,” she explained.

“So I have an open mind; this is supposed to represent change, healing, and reconciliation. So how could I not want to be a part of that?”

“I prayed about it; I asked the creator what I should do.”

Swampy said she thought about the relationship that the pope has with the crown, and how technically the pope can tell the queen what to do. “Maybe he could influence her to fulfill her treaty responsibilities,” said Swampy. “I thought about what my people have needed to heal. I read all the angry posts online about the roads, potential protests, and the pain felt by survivors.”

She said she then realized that if people raised in the Roman Catholic system have endured so much pain, odds are, so did the pope. Someone who dedicated his entire life to the church, he probably suffered along the way.

“And then I realized that he too is just another person, same as you and me. And just as our leaders are there to do right by our people, so is he but he often gets painted with the wrong brush,” said Swampy.

“So, I decided I would go to the event, show my respect as a leader, with the opportunity to meet someone who has this huge reach, not there to represent the bad, but someone hoping to do right by his people.”

“And so, I attended the event, still with mixed feelings but hoping for the best.”

“I’m hoping this small seed of reconciliation leads to far greater actions taken by the crown and government of Canada. This reminds them we are sovereign peoples,” said Swampy.

She also had some mixed feelings about the gifting of a headdress to Pope Francis.

“I had mixed feelings about the pope receiving a headdress, but my friend Bert jokingly said, all these years they tried to kill the Indian in the child, and the first chance we got, we made that pope an Indian. I know he was kidding but it lightened my thoughts on the matter.”

Even though there were many empty seats at the venue, Swampy thought that the atmosphere was warm and inclusive. It gave people the space that they needed to be emotional.

“It was small enough to make it feel personal,” said Swampy. “And it was amazing to see so many people from not only across Canada but from the States as well.”

According to Swampy, a lot of money and time was spent readying the community for the visit. She said that a newly paved road was one of the recent expenses. However, she noted that only the route the Pope came through was paved when the rest of the community road infrastructure is failing and in dire need of repair.

Be the first to comment on "Maskwacis is divided on the Pope’s Apology."