(ANNews) – Walking into Judy Gatto’s busy Grade 4 classroom at Prince Charles School in Edmonton last month brought back a flood of memories; this was the second visit I’d made to the school in as many years and it was just like nothing had changed. I entered the classroom to the buzz of whispering voices, the twang of guitars in the process of fine-tuning, the pleasant squeal of a bow being drawn across the rigid strings of a fiddle – as a group of smiling youngsters settled in their chairs, instruments at the ready to begin the next song.

The eighteen Grade 4 students in this class began their musical training in September 2015; less than six had played an instrument before joining the music program. But unless you’ve got the ear of a professional, you’d never know it. Gatto and her music-teaching partner Gary Lee, each holding a guitar, joined the group as the youngsters played their way through a half dozen tunes.

“Our beginner students are making a lot of progress; they’re all working very hard and both Judy and I are very proud of the way they are caring for their instruments,” smiled part time music teacher Gary Lee, who along with Prince Charles School music teacher, Judy Gatto, has been teaching music to elementary school students for more than a decade. “Our Grade 6 students are very special in that they continue to meet every goal and have become very accomplished. Every time they perform for the public it blows me away to see just how good they really are.” 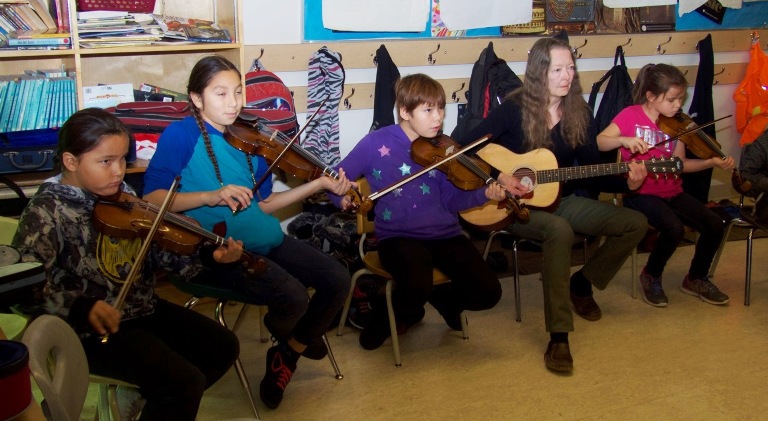 The group of Grade 4’s finished up the morning part of the program just as the bell rang for lunch. Less than an hour later the Grade 6 students, along with some of the more-accomplished Grade 5 musicians, took their places in the classroom. Many of the students in this group were in the class I’d visited in the spring of 2014; their improvement was both noteworthy and remarkable. In sync and in-tune they played with precision as they performed several popular songs with the expertise one might expect from a group of practiced high school students.

Gatto teaches music but she also has a curriculum to deliver to her Grade 4 students. To make the transition easier she and Lee are working on ways to utilize their teaching time more effectively in order to get as much information as possible to the students. 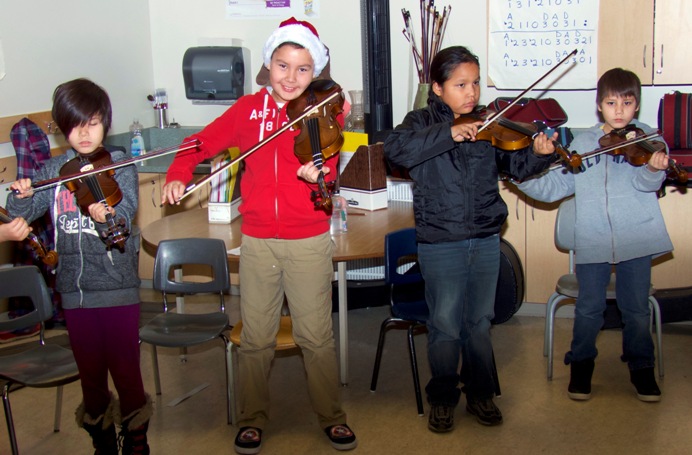 “The improvement isn’t drastic from year to year but it definitely is measurable,” agreed Lee, minutes after the session was over. “You may not have noticed but toward the end of the last song some of the students were getting tired. They had sore fingers and wrists from playing a half dozen up-tempo tunes; there are ways that they can compensate for that, but it’s something that generally comes with experience. Same for the fiddle players, most of whom are playing without the benefit of a shoulder rest. We’ve got about 10 really good fiddlers in this program and we are planning to get them equipped with the rests they need to make longer practices a bit easier.”

“Playing music,” noted Gatto, “is fun and it makes you feel good. No matter what’s going on in your life, playing music makes you feel better. Our fiddle and guitar students learn at different speeds and in different ways; we just do our very best to make the music program a positive experience.”

Research has shown that playing music has many benefits for the students, she assured.

“I have certainly seen these benefits over the past 11 years,” she noted. “Not only do they learn to play an instrument, they learn how to play together in a group, they learn a great deal about themselves and about the importance of working together as a team.”

One of the main keys to success for every student is practice. 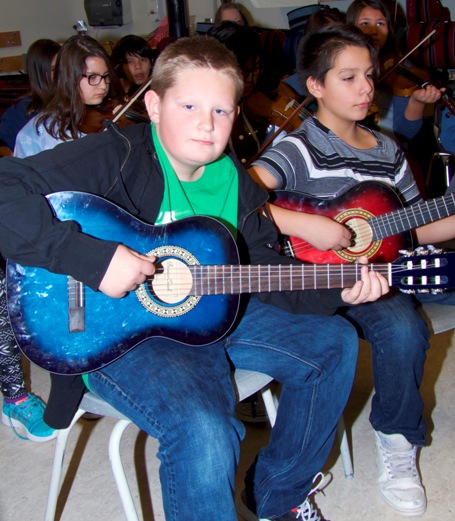 Grade 5 and 6 students enrolling late (after September 4) at Prince Charles School are also able to participate in the school’s music program.

“We do encourage late-comers to the school to participate,” explained Gatto, “but of course that comes with the realization that if this is your first experience with a fiddle or a guitar you need to be prepared to work very hard to catch up with the rest of the group.”

The beginner group (Grade 4) gets underway in September with classroom instruction on Fridays. New students in Grades 5 and 6 are able to catch up if they participate in recess practices until they’re ready to join the group for Friday instruction.
“I’ve worked with many students over the years that have come from behind to make it to the very top performance group,” added Gatto. “One of the special aspects of the program is that we have many performances throughout the year, including weekend, evening and summer performances. The students are very popular and have gained a great deal of recognition over the past few years.” 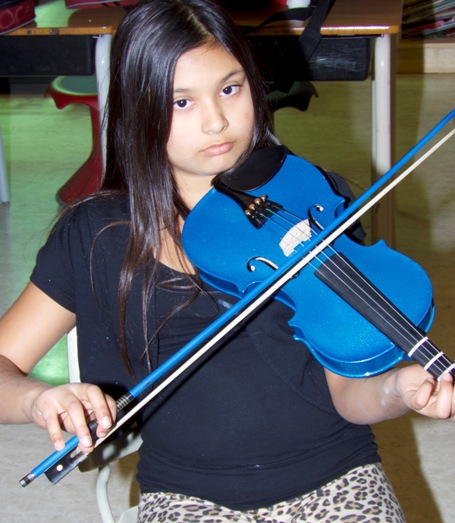 Gary Lee is a professional musician hired by the school to work with the fiddle and guitar students all day on Fridays. On Wednesday afternoons he works with kindergarten students. He’s been teaching music for over 12 years and has been involved in the Prince Charles School music program for more than 10 years.

“Working alongside Judy is like a dream come true; she is an excellent and caring teacher and she’s always trying to improve on what we are doing,” he noted. “We constantly work together to improve ourselves and in doing that the students become our benefactors. I really enjoy sharing my talents with these young students and they show their appreciation by excelling in school.”

Lee spoke about the group’s musically gifted students and how they are being received throughout the community. He mentioned an event that took place last year when he was playing a gig in Grande Cache, noting that renowned big-band sound man, Dave Banks, approached him and commended the music students who he had seen appearing at various venues.

“He told me that every time he hears the kids play he is more and more impressed with them,” noted Lee, who smiled in appreciation of the comments and with pride for the students he helps instruct. 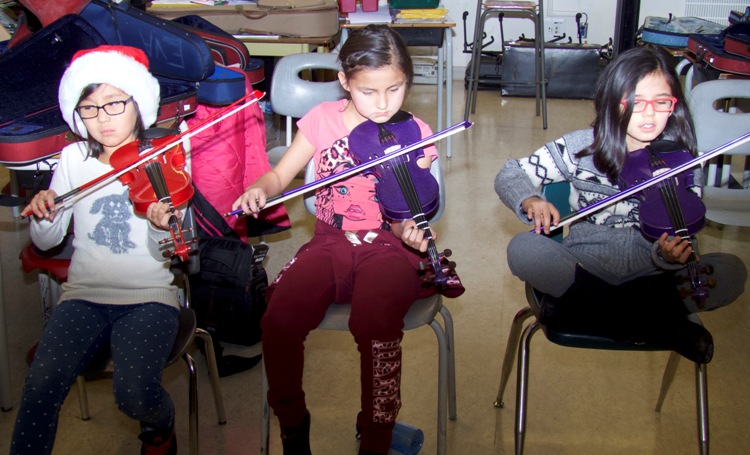 “It’s quite an honour; amazing really that so many people have heard the students play, but to get a nice comment like that from someone who knows his music is especially rewarding; the kids are very proud to receive the kind of recognition they’ve been getting, as are both Judy and myself.”

Prince Charles School serves the Aboriginal community north of the Saskatchewan River. Approximately 10 percent of the students who attend the school actually live in the community. The remaining 90 percent come to school by bus from 51 different school catchment areas to attend the Awasis Urban Aboriginal Program.

“Transportation service is provided by Edmonton Public Schools,” noted Gatto, “and approximately 95 percent of the students attending Prince Charles are of Aboriginal ancestry.” 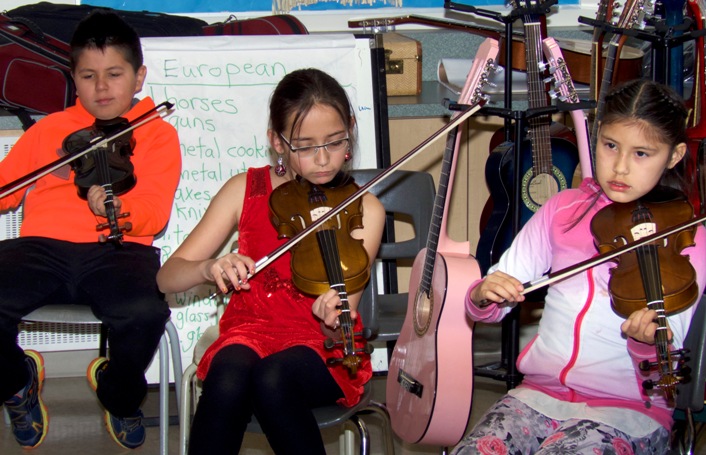 The school’s young musicians have been treated to a variety of incredible opportunities. Audiences love to hear them play. Most recently, the group held a large performance at City Hall in honour of Metis week in November.

“This group included some of our former students who are now at Westmount Junior High,” noted Gatto. “We also had a large group perform at Wichitowin Night in October as well as several performances at local schools; more have been scheduled for the New Year. Our highlight last spring was playing on the Main Stage for APTN’s National Aboriginal Day celebration.”

During the past 15 months the students have also joined the Edmonton Symphony Orchestra for two performances, participated various times in the Heart of the City Festival and entertained Elders and others at the Native Seniors Centre. They’ve also participated in National Aboriginal Day outings, played at Fort Edmonton Park, at the Consort Gun Show and Music Jamboree, at NAIT’s Aboriginal Awareness Week celebrations, at a First Nations conference in Sherwood Park and various other venues. “Needless to say, the entire school, as well as parents, grandparents and guardians are very proud of the students and their achievements,” said Gatto.