(ANNews) – On November 17, more than 100 people joined staff and administration from Poundmaker’s Lodge Treatment Centre to celebrate National Addictions Awareness week with an annual Sober Walk in Edmonton that began at Canada Place and ended at the Alberta Legislature. Shortly after arriving at the stairs to Legislature building several guest speakers took to the podium to talk about the benefits of living a healthy life free of drugs and alcohol.

Poundmaker’s Cultural Advisor Robert Johnson was among the first to speak, welcoming and thanking those who braved the cold weather and gusting wind to support a cause that is vital to the well-being of Canada’s Indigenous communities. 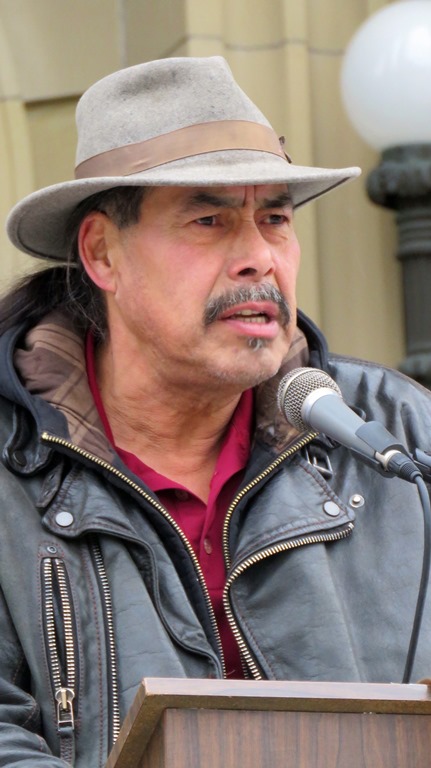 “Sobriety is at the cornerstone of what I do today,” assured Johnson, who encouraged those in attendance to maintain their sober and addictions free lifestyles by thinking ahead, and never looking back.

“Don’t think about yesterday or dwell on the past,” he said, “but look instead to the present and think of the future.

“Our unofficial mandate at Poundmaker’s Lodge is to make certain that you understand that addictions can be remedied; clean and sober you can go back to the old way of life where you can live in a spiritual way and enjoy the good and positive things in life.”

Johnson, who worked with Brad Cardinal as a counsellor at Poundmaker’s in the early 1990s, lauded the now-Executive Director for his vision and purpose and told the crowd that after Poundmaker’s, “Brad worked for the government for more than 30 years and now he’s back at Poundmaker’s; we are grateful to have him back working for the people and with the Creator.”

Poundmaker’s board member Jim Brule took to the podium to offer a prayer and congratulate participants for their involvement and determination to achieve sobriety. 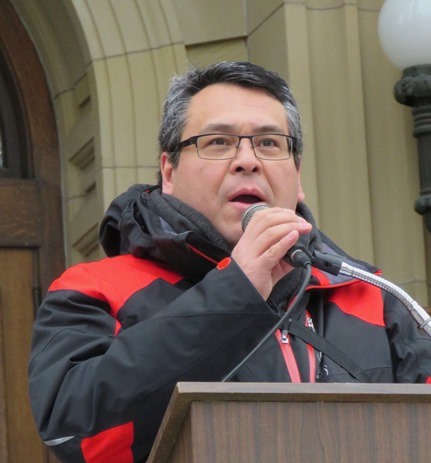 Executive Director Brad Cardinal welcomed the gathering and thanked them for their participation and their sojourn into sobriety. He spoke about national addictions awareness week and the significant role it plays in helping Canada’s Indigenous communities overcome issues of alcohol and substance abuse, much of it brought on by the trauma of the Residential School era. Cardinal noted that that this important national initiative was originally spearheaded by respected Indigenous Elder, Dr. Maggie Hodgson, an initiative that continues to gather momentum with each passing year.

“In the spirit of our visionary leader, Chief Poundmaker,” he said, “we have faced our challenges with a brave heart. Many years ago, our Elders had the foresight and vision of seeing this work progress through hard work, determination and a collaborative effort.” 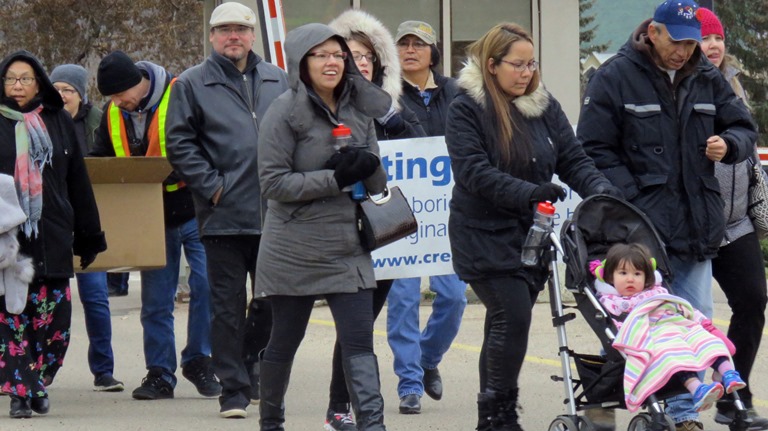 Talking about the challenges faced and the accomplishments made by the world-renowned addictions awareness and treatment program, Cardinal thanked the provincial government for its ongoing support, noting that Poundmaker’s success comes as a result of hard work and being “fortunate enough to have developed several partnerships at the provincial, national and international levels; this has enabled our programs to be delivered to a broader audience than we had previously anticipated.” 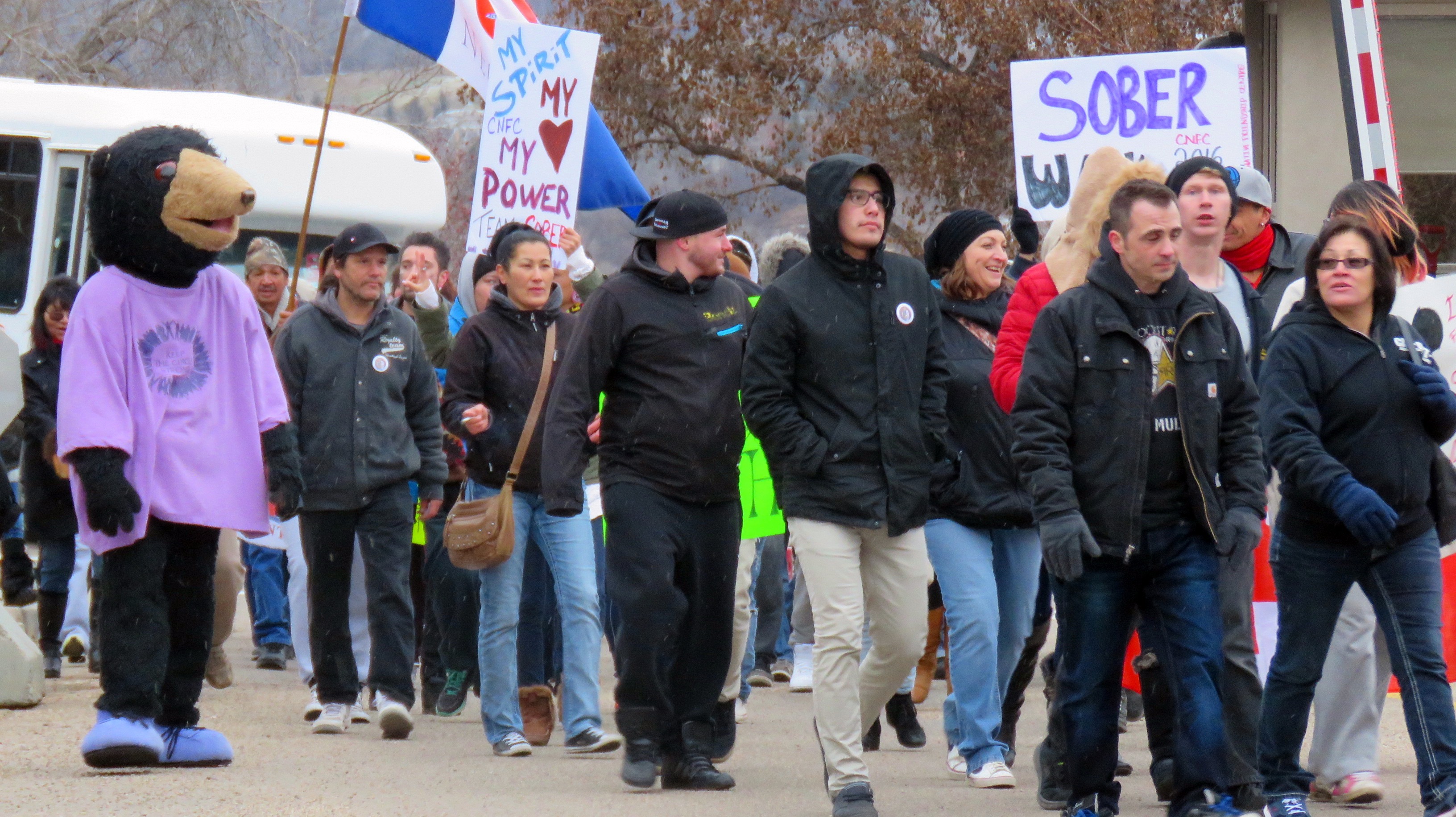 In fact, initiatives that originated and were developed by Poundmaker’s Lodge administrators and staff are currently being delivered in numerous countries around the world.

Elder Marilyn Buffalo, a descendent of Yellow Mud Blanket, brother of Chief Poundmaker, original signatory to Treaty No. 6 of 1876, was introduced as “a tireless advocate for women’s rights and a long-standing supporter of Poundmaker’s Lodge Treatment Centres.” She congratulated the congregation of supporters for attending the event and encouraged “those of you who went to the Poundmaker’s Treatment Centre for help with your sobriety to give yourself a pat on the back and a big round of applause for what you have accomplished.” 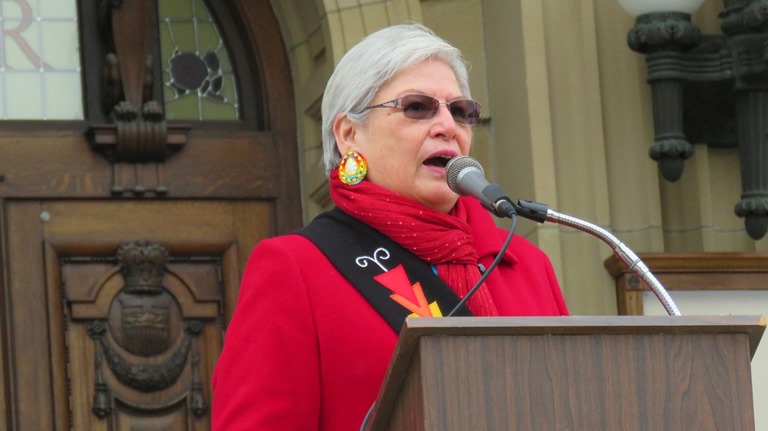 As a former national leader who presided over the Native Women’s Association of Canada from 1997 through 2000 Buffalo, who was named ‘Morning Sun Woman’ in a Plains Cree Sun Dance ceremony, was born and raised on the Samson Cree Nation and attended Ermineskin Residential School in Maskwacis, Alberta, for nine years. During her tenure with the national women’s association Buffalo denounced the Statement of Reconciliation offered by (then) Indian Affairs Minister Jane Stewart, because it did not meet the standards of a full apology. She negotiated and implemented a 5-year national partnership agreement with HRDC, the net worth of $15 million for Aboriginal women employment and training initiatives. From 2000 to 2005, she acted as Senior Policy Advisor to the Samson Cree Nation in Ottawa and at the same time advised a legal team on policy and communications matters associated with landmark (Victor Buffalo vs. the Queen) treaty rights and breach of trust lawsuit. 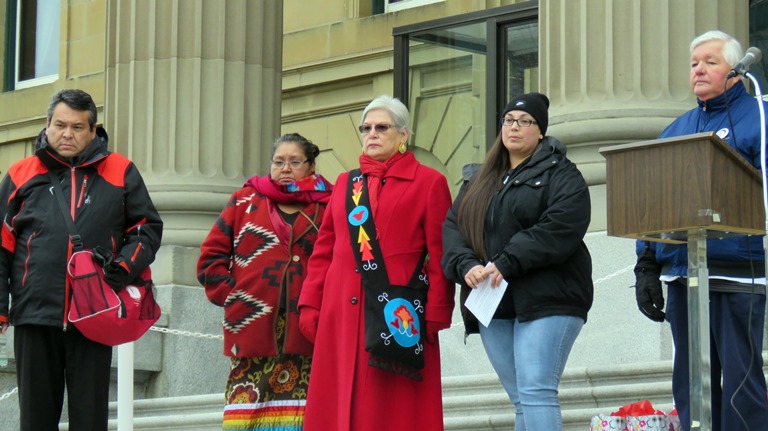 She was recognized by Chatelaine Magazine in December 2000 as Canada’s Role Model of the Year. In 2002, Marilyn Buffalo was presented with an Eagle Feather Award by the Southern Chiefs of Manitoba in recognition of her continued dedication to Canada’s First Nations Land and Treaty Rights and in 2004 was the recipient of a Golden Eagle Award, an honour bestowed upon her by the Native Women’s Association of Canada for her lifetime contributions to Canada’s Aboriginal Women.

Noting that Indigenous Canadians are the fastest growing population in Canada with a high percentage of young adults out of work and looking for answers, Buffalo encouraged them to pursue the help they needed to move ahead into the future.

“If you need help, ask for it; there’s nothing wrong about asking for help when you have an illness or something is bothering you. There are too many suicides in our community; if each one of us went out and helped ten people and they in turn did the same, imagine what we could accomplish. The Alberta government, for too long, has not been listening to us; now that may sound political but the fact is that we have the largest number of children in care in the province.”

Though only 10 percent of Alberta’s children come from an Indigenous background they make up 70 percent of children in care, an appalling statistic that continues to escalate despite the overwhelming evidence that the province’s so-called child welfare system is poorly managed, under-staffed and lacks the equal balance of Indigenous employees need to ensure some semblance of success.

“We also have the highest number of homeless people in this province, in fact in this country,” noted Buffalo, “and I call on the Alberta Government to please put money aside for our children. More and more Aboriginal people are moving into the cities and we do not have the services we need.

“With all the cutbacks in health, education and child welfare we have to step up and help our own people now. It is no longer acceptable to sit back and do nothing. Each person here is a leader and you need to go home to your families, talk to them and together help make a difference in the lives of those who need us today. Keep fit, stay healthy – if you want to be a leader today you need a clean spirit and a clean body and you will be unstoppable. Go back to school, learn a trade, utilize your skills and plan your future – be unstoppable.” 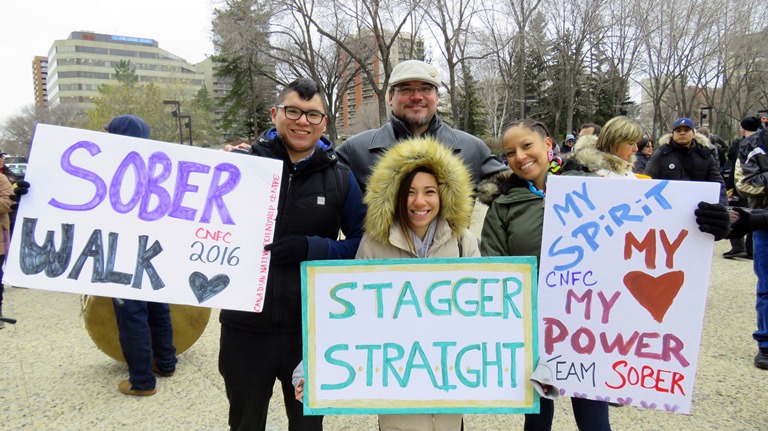 Poundmaker’s Lodge, renowned worldwide for its innovative leadership and proven addictions treatment programs, has a long and successful history that began on April 4, 1973. The first signatories to the society’s bylaws, Wilton Littlechild, Christine Daniels (deceased), Madeline Stout, Kathleen Anderson, and Louis Halfe (deceased) gathered in Edmonton to embark on a venture that would  inevitably fulfill the objectives they had discussed when they first decided to act on their vision. They knew full well that an array of social problems, most a result of residential school abuse and continued marginalization by both government and society, were taking their toll on the Aboriginal population, particularly as far as addictions to drugs and alcohol were concerned. A year after the society was formed the group left their small Edmonton facility and moved north to what is now 25108 Poundmaker Road, Sturgeon County. 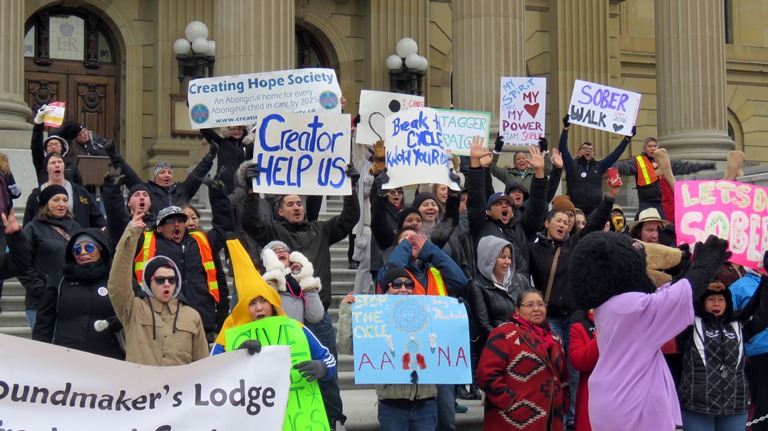