OTTAWA, June 21, 2018 /CNW/ – On the first National Indigenous Peoples Day, Assembly of First Nations (AFN) National Chief Perry Bellegarde urged all members of Parliament and the Senate to pass Bill C-262, the United Nations Declaration on the Rights of Indigenous Peoples Act and ensure it receives Royal Assent in 2018.

“Bill C-262 provides the framework for reconciliation and a path towards closing the gap in the quality of life between First Nations and Canada. On a day focused on celebrating Indigenous peoples across Turtle Island, I urge all members of Parliament and the Senate to move now to ensure it becomes law as quickly as possible,” said AFN National Chief Bellegarde.

“I encourage First Nations and all Canadians to stand proud today and celebrate the many accomplishments and contributions of First Nations to these lands. The opportunity before all of us now is to move forward together in the true spirit of reconciliation,” said National Chief Bellegarde. 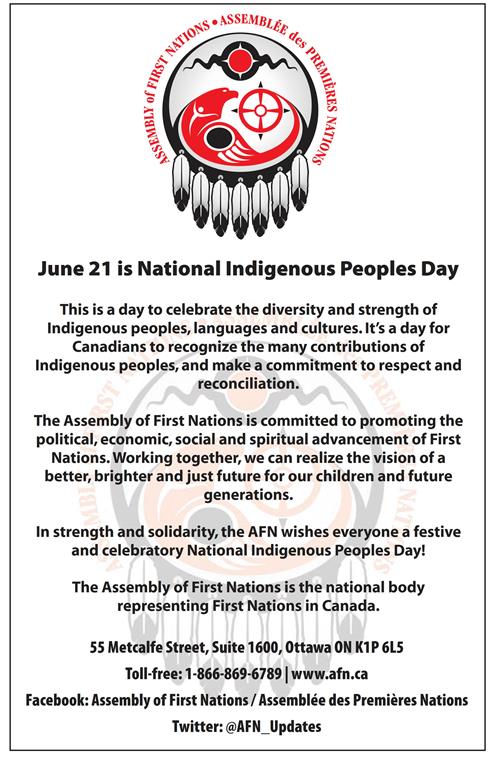 While AFN advocated for the creation of a National Solidarity Day as early as 1982, June 21 has been designated “National Aboriginal Day” since it was announced in 1996 by former Governor General of Canada Roméo LeBlanc. The new name, “National Indigenous Peoples Day”, was announced last June 21 by Prime Minister Justin Trudeau, making this year the first day marked with the new name. The new name is consistent with international recognition and an AFN resolution calling for the change.

The month of June is National Indigenous History Month in Canada. Through a month-long social media campaign, AFN is encouraging all Canadians to learn more about First Nations contributions, cultures, languages and ceremonies and to take part in events on or around June 21.

Be the first to comment on "On First National Indigenous Peoples Day, AFN Calls for Passing of Bill C-262 as Framework for Reconciliation"