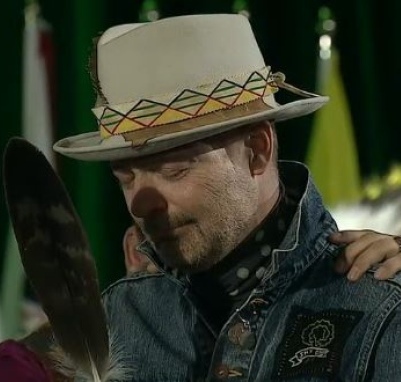 GATINEAU, QC, Dec. 6, 2016 /CNW/ – The Assembly of First Nations today honoured Canadian artist and musician Gord Downie for his work on Reconciliation by presenting him with a star blanket and acknowledgment of the naming ceremony that he recently participated in. He was presented  with a specially-commissioned painting in front of the Chiefs-in-Assembly, the Prime Minister of Canada, and members of the Downie family.

Assembly of First Nations National Chief Perry Bellegarde and his wife Valerie wrapped Mr. Downie in a starblanket in the presence of Elders and Chiefs, Grand Chiefs, First Nations youth and other present at the AFN’s Special Chiefs Assembly taking place this week in Gatineau. The star blanket is bestowed to demonstrate respect and admiration for an individual. The blanket is wrapped around the person to convey protection, warmth and to alleviate loneliness. The naming ceremony followed the bestowing of an eagle feather, another very high honour. Mr. Downie also received the name Wicapi Omani, which is Lakota for Walks with the Stars. 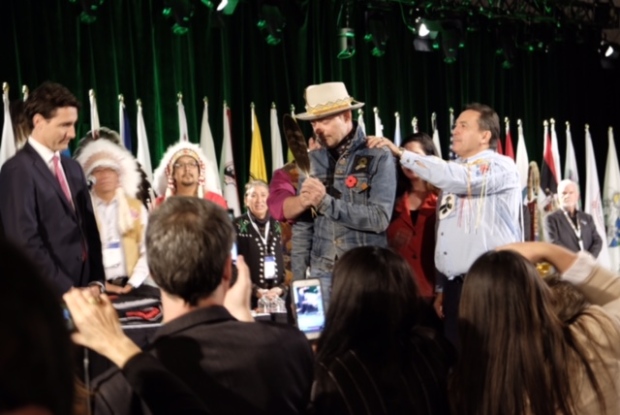 “Gord Downie is shining a light on the inequality experienced by indigenous peoples. Today, we lift up and honour Gord Downie, whose words and music have introduced millions of Canadians to the story of Chanie Wenjack, a young boy who has come to represent the thousands of children subjected to the Residential Schools system, just one of the many who was taken from his family never to see them again,” said National Chief Bellegarde. “Gord’s devotion to sharing Chanie’s story with Canadians will help to open eyes to a tragic history and light the way to a brighter and more just future for our peoples.   First Nations are gathered here under the theme ‘Advancing Reconciliation’, and that’s exactly what Gord is doing through his work.”

The honouring included presentation of an Eagle feather, one of the highest honours bestowed to individuals who show great leadership, courage and commitment. AFN Regional Chief for Nova Scotia-Newfoundland Morley Googoo of the Waycobah First Nation presented a painting commissioned for Mr. Downie by Loretta Gould, a Mi’kmaq artist who envisioned Gord Downie and Chanie Wenjack meeting in the work, entitled Share our Teachings. Regional Chief Googoo recently launched the Legacy Room initiative to encourage companies to designate special rooms for discussion and advancement of Reconciliation with the newly created Gord Downie and Chanie Wenjack Fund.

“Gord’s main objective with the Secret Path project was to create a conversation about Reconciliation that would span generations,” said Regional Chief Googoo. “I am honoured today to present him with this beautiful depiction in recognition of his lasting contribution to Reconciliation on behalf of the AFN.”

Gord Downie is currently touring The Secret Path, an animated film based on Mr. Downie’s poems and music and illustrations by comic artist Jeff Lemire. Proceeds from the Secret Path album and graphic novel will be donated to the National Centre for Truth and Reconciliation at the University of Manitoba. The Secret Path and Road to Reconciliation panel discussion can be watched at cbc.ca/secretpath.