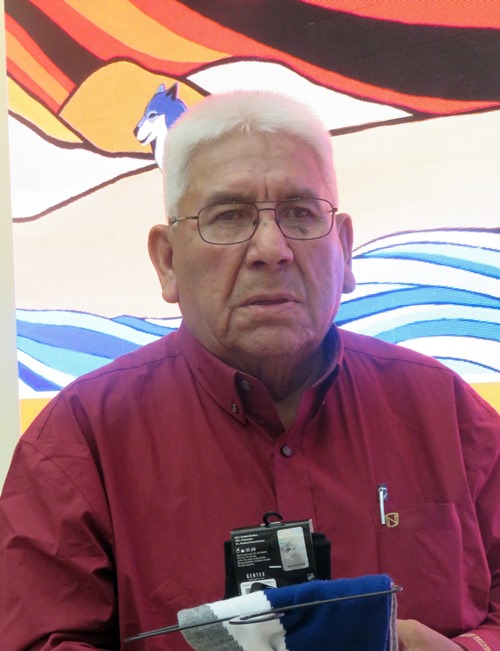 (ANNews) -This month NorQuest College was once again a hub of activity and the centre of attention when dozens of attending guests, speakers, sponsors, community partners and local well-wishers gathered at the Atrium in the college’s Singhmar Centre for Learning to celebrate the college’s latest achievements.

Continuing to set the precedent when it comes to delivering quality education in a safe, friendly and caring environment, NorQuest added four more benchmarks when it opened the new Indigenous student centre, launched an Indigenization Strategy, introduced a new Legacy Room to support the Gord Downie and Chanie Wenjack Fund and became the first post-secondary institution in Edmonton to sign the College and Institutes Canada (CICan) Indigenous Education Protocol.

Before the November 2nd event got underway, a separate celebration took place in the Indigenous Student Centre when Elders Tony Arcand and Delores Cardinal hosted a morning Pipe Ceremony. Emcee and NorQuest Community Mentor and Indigenous Relations worker Orest Zwozdesky then welcomed the crowd, acknowledged Treaty 6 Territory, spoke briefly about the significance of the day and introduced Elder Delores Cardinal before she offered the opening prayer. 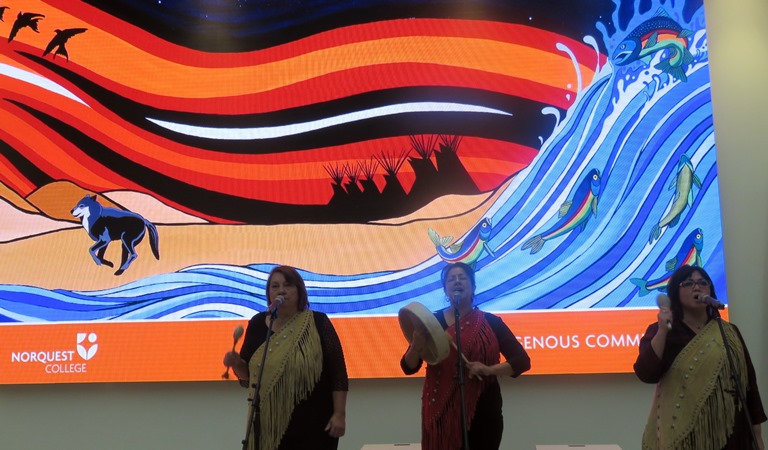 Asani thrilled the audience with their rendition of the national anthem in Cree.

She emphasized the importance of embracing Indigenous traditions and education and told the gathering that “today marks an important milestone in the history of NorQuest College. Two years ago we set out on a journey to make our college more inclusive for our Indigenous students and for the larger community we are invested in.”

That journey has been a successful one; the number of Indigenous achievers continues to grow. In October the college officially opened the 22,500 square metre Singhmar Centre for Learning, (the first expansion at the college in nearly five decades) and this month offered even more positive news. 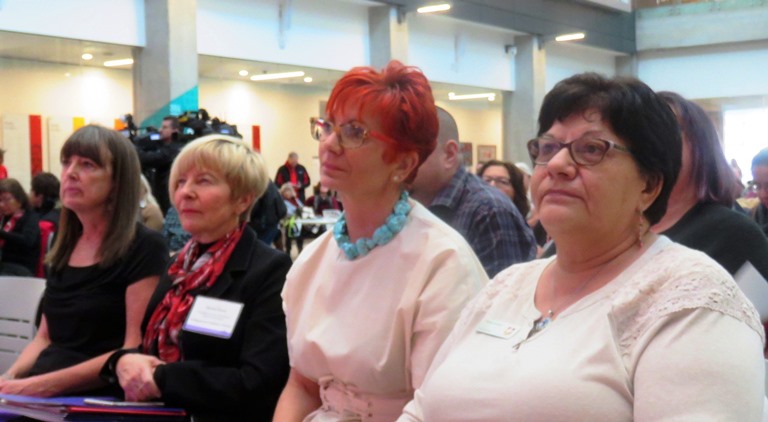 “In the spirit of reconciliation and so the power of education can be shared amongst everyone without fear of judgement or cultural bias,” explained Abbott, “NorQuest College has respectfully and proudly signed the Colleges and Institutes Canada (CICan) Indigenous Protocol. “By signing this protocol we recognize and affirm our responsibility and obligation to Indigenous education. We recognize and respect that Indigenous Peoples include First Nation, Métis, and Inuit, and that they have distinct cultures, languages, histories, and contemporary perspectives. This is our commitment to making Indigenous education a priority at NorQuest College.”

The document highlights the importance of approaches required to address Indigenous Peoples’ learning needs and supports the educational and economic development of Indigenous communities. 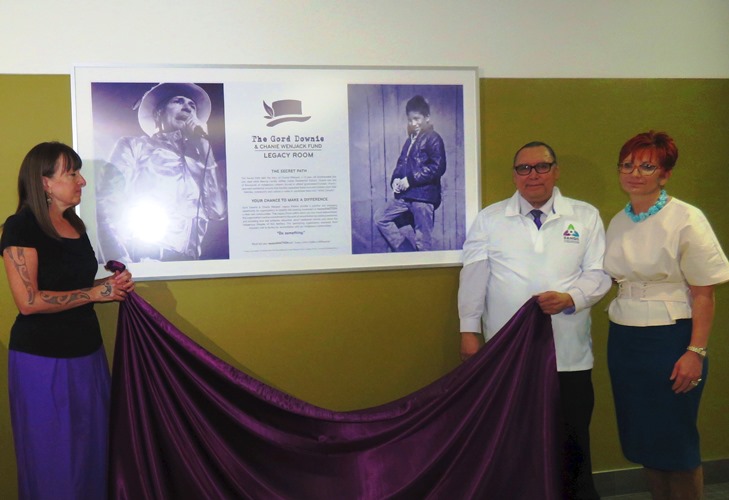 The NorQuest Legacy Room was unveiled and officially opened this month.

To reinforce that commitment, noted Abbott, NorQuest also became the first institution of any kind in Western Canada to offer space for the creation of a Legacy Room.

The Legacy Room, a dream come true for both its initiator, Gord Downie, and the family of 12 year old Chanie Wenjack, a young Indigenous boy who died in 1966 after fleeing a residential school in northern western Ontario, is dedicated to reconciliation and enables organizations housing the rooms to highlight their commitment to Canada’s reconciliation journey. It is a place where people can come together to talk about reconciliation and acts as a reminder that this important movement has been designed to provide Canadians an opportunity to gain a better understanding of the plight of Indigenous peoples and the affect that the schools continue to have on Indigenous Canadians and their communities. 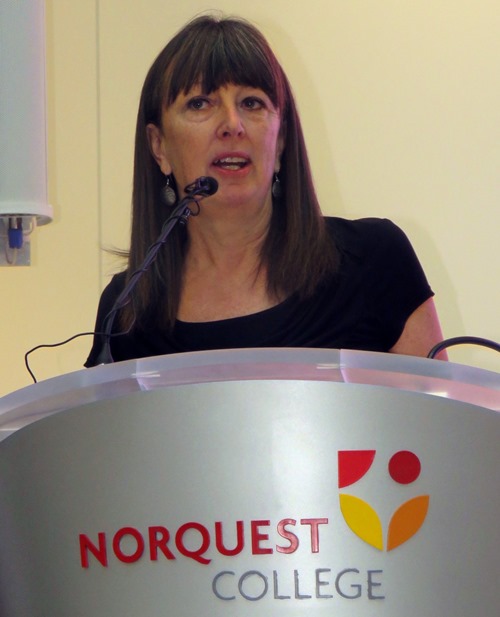 The addition of the Legacy Room was yet another in a lengthy list of initiatives developed by the college during the last couple of years. Located along the west wall of the Heritage Tower, the Legacy Room sits in one of the college’s busiest locations and in full view of students, employees and the general public. The location was chosen to ensure that as many people as possible would have access to the room, a site that promotes reconciliation and allows every visitor to the college the opportunity to learn more about the former Indian Residential Schools and the legacy they have created.

Amyot, who makes her home in Ottawa, greeted the gathering, pleased to see such a large number of people come out to witness the signing. 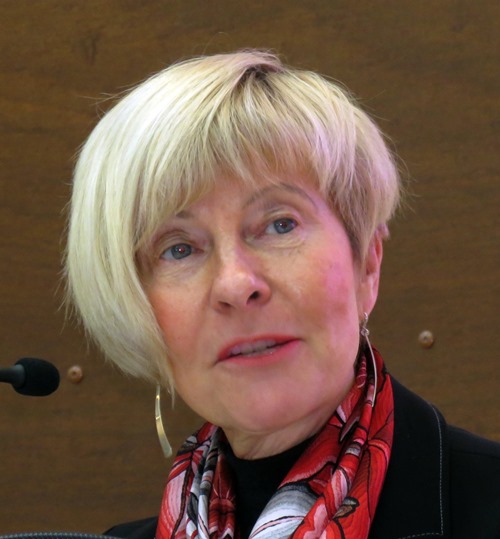 “I am honoured to be with you all today to celebrate NorQuest College’s commitment to Indigenous learners and communities and the official signing of the CICan Indigenous Education Protocol. Indigenous youth are the fastest growing demographic in Canada today. It is an economic and social imperative that we provide Indigenous peoples with the educational opportunities and work-integrated learning experiences to develop the skills they will need to succeed and thrive as they transition (from college) into employment. It is so important that we all work collaboratively to advance the journey of Truth and Reconciliation and continue building on the Protocol to better support and meet the needs of Indigenous learners, engage with Indigenous communities and deepen the collective understanding of Indigenous history and culture among students, staff and faculty members. This will help us advance the journey of Truth and Reconciliation our country needs to move forward on.”

Edmonton Mayor Don Iveson noted that during the past decade he has come to realize the important work being achieved by NorQuest College.

“I am so grateful,” he said, “to have had the opportunity to learn about the extraordinary work, the transformational undertaking that this college stands for every day for more than 10,000 learners in our city.” 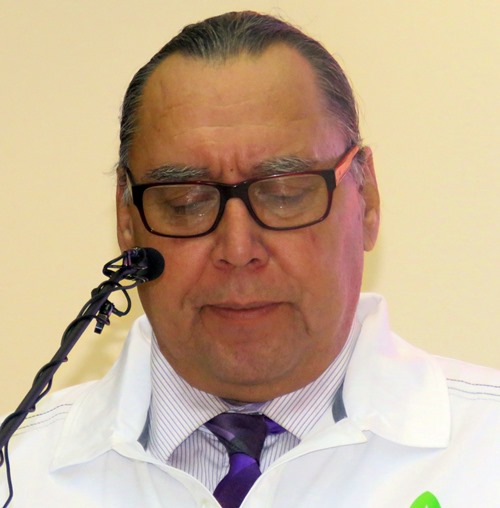 Student’s Association member Gordon Holub also addressed the gathering and talked about the important role the college plays when it comes to educating Indigenous students. He also commented on the creation of the new Legacy Room, noting that it would help in the process of healing intergenerational trauma and providing space that will enable every citizen to learn more about residential schools and what happened within their walls. He said that many students in the college “had no idea about what happened in the schools or how the trauma has continued” to have a negative impact on generations of Indigenous families.

Also on the agenda was the college’s newly adopted Indigenization Strategy. 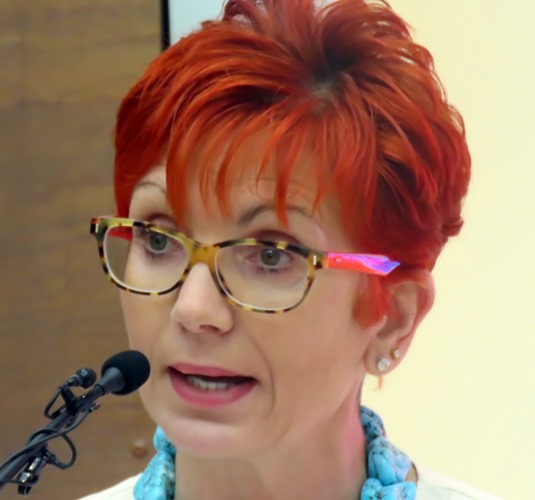 “More than words on paper, it will help guide our day-to-day work,” explained Abbott. “It is a living document that provides us with a holistic approach to reconciliation and decolonization. The success of our college depends on all of us feeling respected, engaged, and part of a greater good. We have been deeply inspired by the concept of wahkôhtowin, which means everything is related. When we reflect on this noble concept, we realized that wahkôhtowin shouldn’t be only about our commitment to Indigenous learners, but about our entire philosophy at NorQuest. Our goal is to work as a fully integrated organization.”

NorQuest College is the Edmonton region’s only community college serving 15,850 students annually throughout the province in full-time, part-time, distance learning, and regional programs. It is located in downtown Edmonton. For more information visit norquest.ca. 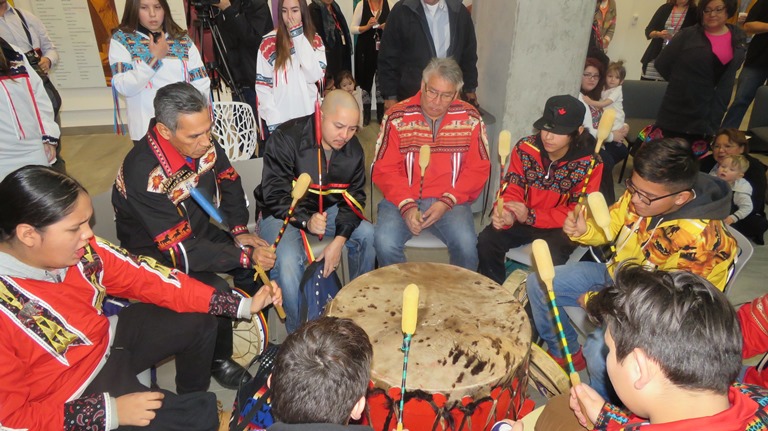 The drums and chants of the incomparable Amiskwaciy Singers was enjoyed by everyone in attendance.