(ANNews) – Two months after National Inquiry into Missing and Murdered Women and Girls (MMIWG) health experts and lawyers met in the Alberta capital to prepare for the Edmonton segment of the inquiry, and just one week after Chief Commissioner Marion Buller called for a national police task force to look into old allegations and investigations, Buller and Commissioners Qajaq Robinson and Brian Eyolfson arrived in Edmonton to begin hearing three days of testimony from survivors and families of those who were murdered or have disappeared.

Inquiry commissioners are visiting communities in Alberta, Nova Scotia, Manitoba, British Columbia and the Yukon to talk to survivors and examine the circumstances behind the deaths and disappearances of hundreds of Indigenous women and girls over the past several decades. Once the final hearings have been completed the Commission will prepare a report that will include recommendations to promote safer and healthier communities.

On November 6, 2017 the commission arrived in Edmonton to participate in both the Lighting of the Sacred Fire and the opening ceremonies. The hearings began on November 7 and concluded on November 9. Early reports indicated that 58 survivors would offer testimony at the inquiry but when the hearings wound up that number had increased to 75. 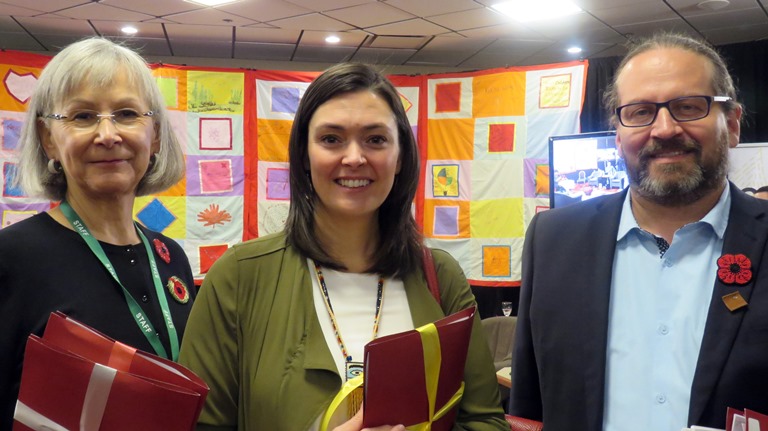 Debbie Reid, the Executive Director of the National Inquiry, told media that there is a misconception by many people about what it takes to achieve the goals of the commission.

“These aren’t 15-minute interviews,” she said, noting that most take over an hour and that the Commission was working 18 hours a day to achieve the goals of the initiative.

“Most inquiries,” she noted, “are about a time frame or what happened between this date and that.

“We’re not looking at time frames (and) we’re not looking at specific actions; the magnitude of this needs a different way of handing an inquiry. We’ve learned a lot, even from one inquiry to the next. During the three days in Edmonton we interviewed 75 truth tellers in three days and in Winnipeg 105 people offered testimony in five days.”

During the past couple of months there have been various cries from the public, from organizations and from opposition parties, even from survivors who say the process is taking too long and that no one is looking into old cases in order to bring justice to the victims and their families. Chief Commissioner Buller defended the commission and explained that they are also experiencing some frustration.

“We don’t have a police force arm to work with us, to help survivor families get the answers they want and so desperately need to have,” she said in a recent statement.

“This has been a challenge from the beginning. According to our terms of reference we can refer matters to the police services for re-investigation, but only when we find new information and that’s an important distinction. For families that are living with questions for generations – they don’t fall neatly into that little box. What we need to do is provide the opportunity, or a venue, to get the answers that these families so desperately need.”

One of those venues, she added, could become a reality if Health Canada heeds a request from the Commission to expand currently inadequate programs for the individuals and families who testify.

The commission’s report also calls for Health Canada to expand an existing support program for those who testify.

During her opening remarks Marion Buller said that the commission “will listen and share in the loss of each families’ loved ones and we will share in the violence experienced by each survivor. This may feel like a heavy weight to carry and indeed it is, but we do not carry this weight alone. There is strength in numbers and we will share the weight, the burden of this testimony.

“Together we will witness each contribution to the record of evidence of the National Inquiry. We are here to listen so that we can gain further insight into the systemic and root causes of violence against our women, girls and two-spirit relations. Let us continue to move forward in a good way, guided by the memory and spirit of our lost loved ones. We are striving to make the truth gathering that we are doing meaningful and safe for all participants.

“It will inform all Canadians of how to improve the outcomes for Indigenous women and girls and LGBTQ people. Your stories are powerful, your stories are important. We remain committed to the families and survivors and loved ones and we invite you to share in a way that feels safest for you.”

Thanking those who came to listen and those who watched the proceedings during the online streaming of the gathering, Buller noted:

“This isn’t just an Indigenous problem, this is a Canadian problem; this is a national tragedy. We have a vital role to play in making Canada a safe place to live for everyone. To all Canadians, I want to acknowledge your place, your support, your kindness and your open minds. As we move forward together we will all hear about how to make a better life.”

The three days of testimony and sharing of facts in Edmonton, heard from more than 70 people, many of them women who told stories of suffering, loss, lack of sleep, lack of motivation. Many told stories about the poor treatment they received from policing and other authorities when seeking answers about their lost loved ones. Other talked about missing persons reports that went missing and authorities who brushed off survivor families with unexpected callousness. The Commissioners encouraged them to continue on and to remain steadfast when it comes to seeking the answers they need in order to move on with their lives.

Complaints that the Commission is too slow, too quiet, too closed-mouth or not having the right people on board have made the headlines across Canada in recent weeks. The nature of these accusations are usually delivered in a confrontational or boisterous nature, so media pays attention and is quick to report on the negativity. The Native Women’s Association of Canada (NWAC), however, has called for calm. The first group to advocate and fight for Indigenous rights, particularly the rights of Indigenous women, NWAC has never shied away from speaking out about injustices and government’s often turtle-like pace but this time they have taken a different stance and their arguments are not only well founded, it is important that they are heard.

“While there has been discussion about the need for the Commissioners and staff to apply a trauma-informed lens on all aspects of the National Inquiry work – for example, by being honest and transparent with what MMIWG2S families can expect at every stage of participation,” noted NWAC President Francyne D. Joe,

“NWAC is asking that we all remain mindful of the need to apply a trauma-informed lens when discussing the National Inquiry.

“This is not to say that we cannot be critical of the National Inquiry, there are issues that need to be resolved and many, NWAC included, are looking for reassurances that our concerns are being heard and plans are being put in place to ensure improvements are made. NWAC will continue to release Report Cards as well as work directly with the National Inquiry to provide guidance and support. Applying a trauma-informed lens to discussions around the National Inquiry respects the reality that many families are counting on this important work.

“As I continue to travel the country and our sister organizations continue to provide on-the-ground support to families, we hear from families that are looking forward to participating, many considering sharing their story for the first time. These realities need to be considered every time the National Inquiry is criticized because these critiques do not stand in isolation but rather are connecting to the lives and experiences of the women, Two-Spirit people and families impacted by this violence.

“We want the public to hear from families and learn about the root causes of this violence. And, similar to the Truth and Reconciliation Commission, we want Canadians to be empathetic and want to be part of a movement for social change. Disparaging the National Inquiry is distracting from the real issue and takes space away from the experiences of families.

“At the same time, we know that there are families that are calling for a ‘reset’ and NWAC respects every family’s choice to participate in any way they wish, however, until we hear from the hundreds of families from all across the country, NWAC will remain committed to this process and continue to reiterate that we have a vested interest in the success of the National Inquiry.”

The Truth and Reconciliation Commission had a job to do, to find the truth and to seek ways that Canada and its Indigenous citizens could reconcile and move forward together into a future of promise and understanding. The National Inquiry delving into the cases of Missing and Murdered Indigenous Women and Girls also seeks the truth, but reconciliation is not the answer here; the only answer that will provide closure is justice, justice for those who have suffered and a different kind of justice for the perpetrators of crimes against Indigenous women and girls.