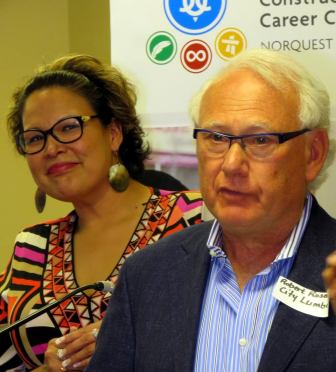 The Norquest-based Alberta Aboriginal Construction Career Centre (AACCC) held an open house on May 20 to introduce an innovative initiative designed to connect Aboriginal and other workers with employers who are recruiting men and women interested in pursuing construction-related careers.

The two-hour event, sponsored by City Lumber, got underway with AACCC Manager Ruby Littlechild’s introduction of the four Treaty 6 and Norquest Elders (Tony Arcand, Mary Moonias, Delores Cardinal, Betty Lafferty) involved in the program. A prayer by Delores Cardinal and welcoming comments from Tony Arcand were followed by an introduction of the guest speakers, which included JV Driver’s Vice President of Health, Safety and Environment, Vawn Jeddry and City Lumber President Robert Rosen.

“At Norquest College,” noted Littlechild, “our aim is to contribute to the increasing demands of the economy and to maximize opportunities that others may not see. At AACCC we do just that; the program offers a learning environment that embodies diversity while offering real world experiences. Our goal is to empower, enrich and transform the lives of our clients by providing real world experiences to the most under-utilized but eager segment of our potential labour force.” 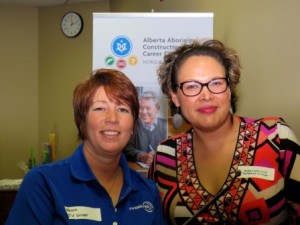 Littlechild spoke about the program, which is based on a model that was first developed (1998) and utilized by the Saskatchewan Indian Institute of Technology, noting “that there are now eight construction career centres across the Province of Saskatchewan.” She also applauded those who helped bring the program to Alberta and thanked them for their contributions. The list includes among others, NorquestPresident and CEO, Dr. Jodi L. Abbott, Vice President of Transformation at NorquestCollege, Patrick Machacek, and Littlechild’s boss, Jonathan Robb, “a strong social change agent and a man who brings a smile to the office every day.”

Littlechild, who joined Norquest in February this year, is a former Association of Professional Engineers and Geoscientists of Alberta (APEGA) employee who has a great deal of experience creating and operating mentoring and outreach programs. She is also committed to the encouragement of higher education, and has played an ongoing role as a mentor for First Nations people. She earned her Bachelor of Arts Degree from the University of Alberta and completed her Masters in Education Degree from Gonzaga University in 2012. She is currently working on her Masters in Business Administration. 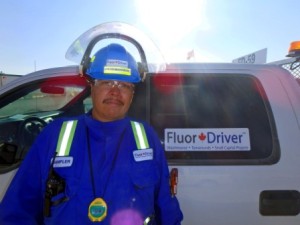 Calvin Beaverbone is the first  Aboriginal worker  placed into a rewarding career opportunity by the Alberta Aboriginal Construction Centre –  at JV Driver.

“As an Alberta First Nation grassroots scholar and a former Norquest student I have seen firsthand why AACCC and Norquest are a perfect fit; the AACCC is a great initiative that signifies a much needed and required shift in social consciousness.Norquest is taking a leadership role; this centre signifies leadership, inclusion, equality and empowerment for those Albertans who have not had the opportunity or had doors opened for them in the area of construction employment.”

The AACCC initiative is a two year pilot project that is being hosted both byNorquest College and Bow Valley College in Calgary. The two centres are delivering job coaching, counselling and employment referrals to hundreds of applicants; the goal is to place more than 300 Aboriginal and other workers in construction-related jobs during the next two years.

“We have already established several partnerships with employers and existing community resources that will help provide employment services and supports for potential workers, with the goal of successful employment outcomes,” noted Littlechild, who said that career coaches are currently working to address “any specific challenges and helping to ensure that our clients prepare for and meet safety-training requirements.”

Partnerships have already been established with several companies, including WorleyParsons, JV Driver, and Northern Gateway and Littlechild said she encourages all construction-oriented companies “to call me if you happen to be looking for qualified workers with a will to succeed.”

More than a dozen clients have already been placed into rewarding employment opportunities; the first was Calvin Beaverbone, a non-status member of central Alberta’s O’Chiese First Nation. He was employed by JV Driver, an industrial contractor with operations across Canada and the USA.

“Upon interviewing him,” noted Littlechild, “JV Driver and their joint venture partner Fluor engaged immediately and offered Calvin a position as a Lab Sampler at the Kearl site.”

Beaverbone, already a proven and “extremely versatile construction worker” earned the required certifications within a month of applying.

“Calvin came into the centre the day after the program was launched,” explained Littlechild, who called Beaverbone “a capable, responsible, quietly humble hard worker with a desire to succeed.”

In an interview Beaverbone said he was very pleased with his job and creditedNorquest and the AACCC initiative for what he called “a life-changing opportunity” and one that he intends to maintain well into the future.

Fluor Driver Site Manager, Scott Wilson, told Alberta Native News that “we are very pleased with Calvin’s job performance in the lab sampling crew. He is a great fit for our team here at the Kearl site. He bought into the Safety culture right away and is also a key contributor to the Safety Opportunity System. We look forward to assisting Calvin with his growth and opportunities that Fluor Driver presents at the Kearl site.”

Wilson also stated that “we are both pleased and honoured to be part of the AACCC team and will continue to work with Indigenous people to provide long term meaningful opportunities.”

Other FNMI construction workers have also been hired by the company over the past several weeks.

JV Driver’s Vawn Jeddry, a “staunch supporter” of Norquest and the AACCC initiative, told the gathering that she was both “pleased and humbled to be a part of this exciting program.” She spoke about being the first to hire an employee through the AACCC initiative, applauding Beaverbone for his hard work, safety record and achievements on the worksite, and praising the program and the quality of the resumes they have received.

“We see a ton of resumes,” Jeddry assured, “but the resumes that come out of this facility are stellar. The skills and abilities that these applicants possess, combined with their availability and desire to achieve a successful future for themselves and their families will go a long way to ensuring that they will inevitably meet their goals and realize their dreams.”

Robert Rosen, President and CEO of City Lumber, was the last to speak at the open house event. He lauded both the AACCC program and Norquest College and praised the ongoing efforts of those making a positive difference when it comes to inclusion and equal opportunity and ensuring viable future’s for Alberta’s Aboriginal citizens. The 71 year old entrepreneur also offered a word of caution, noting that the tougher economic times, brought on by low oil prices and the inevitable layoff of workers, would continue for some time to come. He urged society to get its priorities together, to work in unison to help ensure that both Alberta’s and Canada’s economies remain strong.

“I believe it is critical to the future of this country that we do not lose the ability to include and incorporate all Canadians into the system. To accomplish that I believe that a new partnership will be required between government, education and industry to talk about the vital pieces of holding this economy together for the next three or four years.

“It’s important that Norquest and others reach out to this new government and talk to them about their role in this partnership. We are all going to be faced with challenges – how do we all work together to build a strategy that includes everybody?  No group should be excluded because of tougher economic times. To ensure that doesn’t happen, speak out, become involved, be a difference maker.”

For more information about AACCC or to learn how you can prepare for a construction-related career, contact Ruby Littlechild at 780-644-5907 or [email protected]