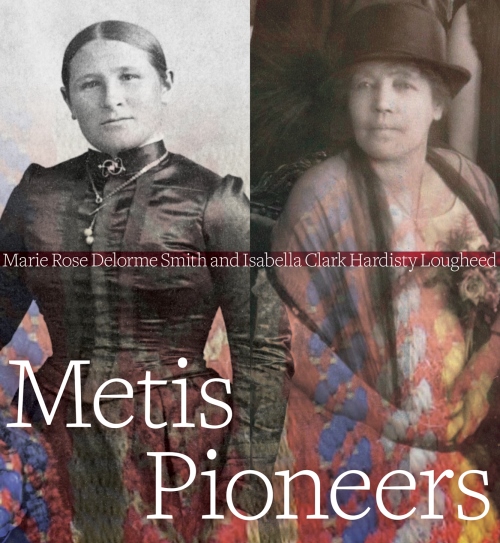 (ANNews) – In mid-March this year the University of Alberta Press released one of its newest titles for 2018, Métis Pioneers, a complex manuscript that delves into the lives of two prominent Métis women, Marie Rose Delorme Smith (1861-1960) and Isabella Clark Hardisty Lougheed (1859-1936). This new release promises to be another important book for scholars, historians, students and readers interested in knowing more about how 19th century Indigenous women, in this case two Métis pioneers, survived and prospered. It will be particularly interesting to readers who appreciate the detail that comes with persistent research and development. That’s because the work created by author Doris Jeanne McKinnon is very thorough and painstakingly researched and though she does note that no book that includes sections with oral teachings can be totally accurate, the story of Marie and Isabella is certainly as close as one could ever come.

MacKinnon is a learned scholar and an excellent writer whose prowess with a pen has few equals. She published her first book: Just an Ordinary Person: The History of Dr. Ethel Taylor in 2006, the same year she graduated from the University of Calgary, an Indigenous history specialist with a Master’s Degree in Canadian and British History. Ironically in 2012, still focussing on Indigenous History, she graduated again from the University of Calgary where she’d earned her Ph.D in Post Confederation Canadian History. In 2012 she also published her second book: The Identities of Marie Rose Delorme Smith (Portrait of a Métis Woman).

In 2016 MacKinnon completed the Professional Master of Education program at Queen’s University (Kingston, ON), this time specializing in Aboriginal Education. That same year she published her third book, Lady Lougheed and Buckskin Mary.

In 2018 came Métis Pioneers, a manuscript that compares the lives of two Métis women who lived in the same era but never actually met. Both women married non-Indigenous men but that’s where the similarity ends. Marie Rose, a French-speaking Metis woman was sold by her mother to a whiskey and blanket merchant for $50 while Isabella, an English-speaking Métis woman married James Alexander Lougheed, who soon after became the youngest man to serve in the Senate.

Marie Rose became a pioneer rancher in Pincher Creek. She gave birth to 17 children and eventually established a boarding house. A writer whose manuscripts were seldom printed, Marie Rose’s articles and works of fiction have been preserved at the Glenbow Museum and proved valuable to MacKinnon’s research.

The daughter of William Lucas Hardisty and Mary Ann Allen, both who came from mixed European/Aboriginal ancestry, Isabella grew up in relative comfort and luxury. Her father, William Lucas Hardisty, was the Hudson’s Bay Company Chief Factor. She married lawyer James Lougheed in 1884. The couple became part of Calgary’s early elite, establishing the “Beaulieu” mansion that later became the Lougheed House. After she was widowed in 1925, the city repossessed the mansion due to unpaid taxes but allowed her to remain living there until she passed away in 1936.

Isabella’s uncles, Richard Hardisty and Donald A. Smith (Lord Strathcona), took advantage of the growing agricultural and commercial goods opportunities that came with the slow demise of the fur industry and soon became known as the richest men in the west.

A story of hardship, resistance, wealth, petulance and prejudice, good times and bad, Métis Pioneers is an interesting and somewhat upbeat and editorially thorough read. A bit difficult to grasp and retain in its entirety, this particular masterpiece offers readers an insightful and detailed look at some real-life characters we might have learned about in our old school books. The difference between those lessons and those in Mackinnon’s book is that the author dispels many old myths and gives her readers a dose of reality when she presents facts that invalidate much of what we were taught in school. Of course, the truth always prevails so readers cannot only absorb the wisdom and inside story delivered by MacKinnon, they now have the communications and media devices and skills to dig even deeper.

The author offers several prime examples of greed and profit at the expense of the Métis people, but perhaps none so compelling as the tales of businessman and politician, James Lougheed and Richard Secord who was a politician in western Canada, a member of the Legislative Assembly of the North-West Territories, a municipal councillor in Edmonton, and a candidate for the Canadian House of Commons.

Further reports, noted Mackinnon in Chapter Four: With This Economy We Do We Wed, “indicate that Richard Secord, who later went on to become a member of the Alberta Legislature “bought an estimated 150,000 acres of Métis land at discounted prices which he, in turn, sold for a huge profit to incoming settlers. Twenty-two years later, Secord would be charged with fraud in connection with speculating in “script” [sic] – certificates for land and cash awarded to the Métis as a one-time compensation for giving up title to their traditional territory.”

According to the news report, the elder Secord was never convicted of fraud, the charge being conveniently quashed by sympathetic politicians in Ottawa who rushed into law a three-year statute of limitations on scrip cases. They applied it retroactively to Secord’s case…Then, in 1981, further scrubbing Secord’s reputation clean, the province named a mountain in his honour as a “prominent Edmonton pioneer.”

Mackinnon noted that when speaking “to a newspaper reporter in 1999, Richard C. Secord, great-grandson of the scrip dealer, and an Edmonton lawyer who at that time defended Indigenous rights, said of his grandfather, “It’s hard to defend what he did…Nothing would surprise me in connection with my great-grandfather. He was quite a character.”

Readers will likely find more than one such character in the many she introduces throughout the 507 page Métis Pioneers manuscript, complete with  acknowledgements, sources, an introduction, and closing notes, index and bibliography. Mackinnon’s book offers readers an in-depth look at the contributions each of the two women made to the growth of Canada’s west, but more than that, it is a book about courage, resilience, determination and strength of character. The book was written to tell the truth, a truth that once accepted by the masses will see reconciliation come full circle.

Métis Pioneers: Marie Rose Delorme Smith and Isabella Clark Hardisty Lougheed was published by University of Alberta Press and issued in print and electronic formats. It is available at your favourite book sellers: ISBN 978–1–77212–271–8 (softcover) and ISBN 978–1–77212–362–3 (Kindle).