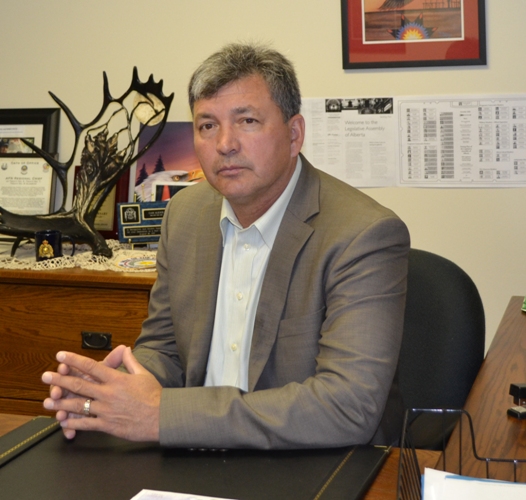 Cameron Alexis is the NDP representative for the Peace River-Westlock riding in the October 19 federal election. Article by John Copley

SLAVE LAKE — Former Assembly of First Nations Regional Chief of Alberta, Cameron Alexis, will be the NDP candidate in the riding of Peace River—Westlock.

“It’s an honour to welcome someone as impressive as Cam to our team,” said NDP Leader Tom Mulcair. “His background in law enforcement and representing First Nations on the national stage speaks to the diversity and strength of his experience.”

A retired RCMP officer who served on the force for 23 years, Alexis recently completed a two and a half year term as the Assembly of First Nations’ Regional Chief of Alberta. Prior to his tenure as Regional Chief, Alexis spent over six years as Chief of Alexis First Nation.

“I’m honoured to join Tom Mulcair’s team and have the chance to represent the NDP here in Peace River—Westlock,” said Alexis. “This election is about change. Tom has a concrete plan with the right priorities for the people of Alberta, including making life more affordable and a real Nation-to-Nation relationship with Indigenous communities. Tom Mulcair has the experience needed to replace Stephen Harper.”