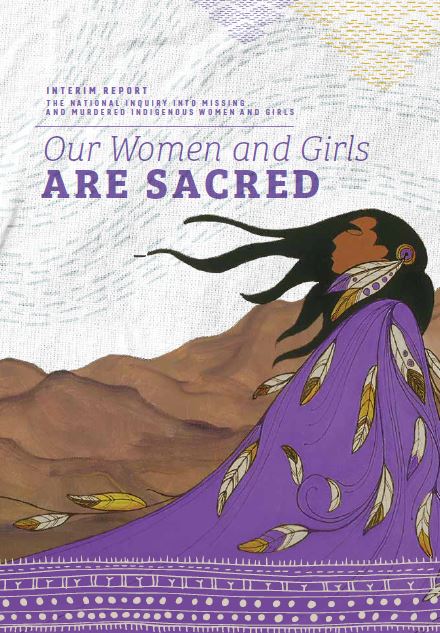 (Ottawa, ON) – The Commissioners of the National Inquiry into Missing and Murdered Indigenous Women and Girls (NI-MMIWG) have released their interim report, meeting their November 1 deadline.

The 118-page report entitled, Our Women and Girls are Sacred outlines what the NI-MMIWG has accomplished to date, acknowledges challenges in establishing a unique and unprecedented National Inquiry of this nature and makes some recommendations for immediate support to assist families that want to participate in the process, including a call to extend the timelines. Most importantly, the Interim Report serves as the blueprint for moving the National Inquiry forward in a good way.

The NI-MMIWG is unprecedented because it covers 14 jurisdictions and looks at the issue of violence against Indigenous women, girls, and LGBTQ2S people in a manner that is culturally centered. The Truth Gathering Process has four fundamental components: research, Community Hearings, Institutional Hearings, and Expert Hearings. The overall process strives to put families and survivors first while honouring those who have been taken.

“Our women, girls and two-spirited people and their families continue to suffer from violence today and we know that they are re-traumatized as they tell their stories to us,” added Buller. “That is why this Interim Report calls for the immediate increased support both financially and for counselling services for families and survivors. The need is much greater than the Inquiry can serve in an on-going manner.

“The National Inquiry will continue to focus on what matters most: providing a safe space and enough time for families and survivors to tell their truths. It is these truths that will inform our recommendations to address the widespread systemic violence that Indigenous woman, girls and two-spirited people face, every day in Canada.”

After some initial challenges, the NI-MMIWG has gained momentum with Indigenous women, girls, transgendered and two-spirited people and families stepping forward to share their important stories. We are determined to keep moving forward in a good way – for the 905 and counting – who want to participate in the National Inquiry. To date, the NI-MMIWG has heard 269 testimonies over three hearings – spanning from Yukon, British Columbia and Manitoba – with one happening today in Membertou, Nova Scotia. There are also six more scheduled to happen until January 2018.

While the National Inquiry for Missing and Murdered Indigenous Women and Girls is only part-way through its mandate and mission, the Interim Report includes three immediate calls to action for the Government of Canada to:

In Our Women and Girls are Sacred, the NI-MMIWG’s Chief Commissioner Marion Buller and Commissioners Brian Eyolfson, Qajaq Robinson and Michèle Audette, outline the next steps as follows:

In response to calls for action from Indigenous families, communities and organizations, as well as non-governmental and international organizations, the Government of Canada launched an independent National Inquiry into Missing and Murdered Indigenous Women and Girls in September 2016.

The National Inquiry is entirely independent from federal, provincial and territorial governments. The Commissioners’ mandate is to examine and report on the systemic causes of all forms of violence against Indigenous women and girls in Canada by looking at patterns and underlying factors.

The NI-MMIWG will continue to hear from family members and survivors, front-line workers ranging from the legal to family services sector to academics, educators, Elders and Knowledge Keepers as the Commissioners continue to find the truth, honour the truth, and give live to the truth as a path to healing.