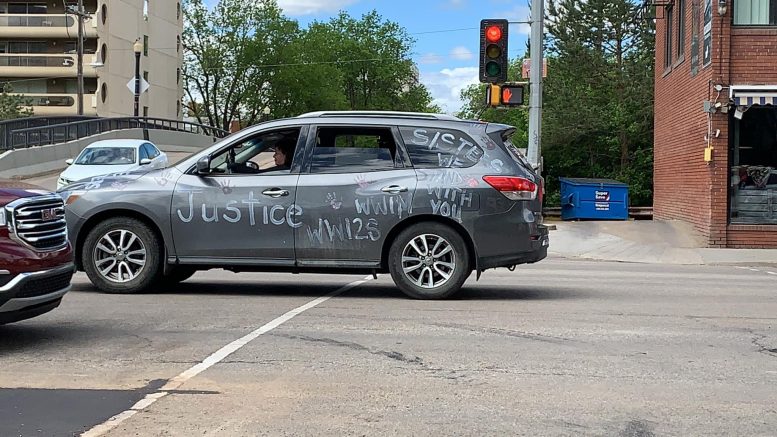 A convoy 4 action was held in Edmonton to protest the lack of action in implementing the Calls for Action listed in the report of the National Inquiry on Missing and Murdered Indigenous Women and Girls that was published 1 year ago. (Photo from the post of Paula Kirman).

(ANNews) – It has been one year since the Final Report of the National Inquiry in Missing and Murdered Indigenous Women and Girls (MMIWG) was released alongside the Calls for Justice. The report gave the Canadian Government 231 recommendations on what needs to done to save Indigenous women across Canada.

It has been one year of no action, no developments, and no justice.

NWAC President, Lorraine Whitman, stated in a news teleconference: “NWAC has compiled a report card of the [Canadian] Government’s progress on the calls for justice… Rather than assess each of the 231 calls, we looked at four broad pathways that the inquiries commissioners said ‘have helped maintain the violence.’ This being health, culture, security, and the right to justice.

“Sadly, in none of those four areas has the government done enough to give it a score. It failed, Period.”

Rather than progressing and creating an action plan, the Canadian Government has actually regressed.

On May 26, 2020 CBC news reported that the release of the federal Government’s action plan on missing and murdered Indigenous women had been postponed due to the global pandemic.

The lack of action has led to great unrest, stated Whitman.

“Saying the pandemic is standing in the way of a national action plan is a double slap in the face to our Indigenous women who are living in even greater fear of violence because of the isolation being brought by this disease.”

UBCIC Women’s representative, Melissa Moses said in a press release, that  “The National Inquiry’s Report and Calls for Justice provide a roadmap to addressing the racism and colonial violence that have led to the genocide of our people and the crisis that is MMIWG; the COVID-19 pandemic is not an excuse to delay this.”

“In its decision to delay the plan, Canada also does a discredit to the thousands of survivors of violence, family members, and loved ones who came bravely forward to provide hours of testimony despite immense pain and trauma.”

In Edmonton, Alberta an event called “Convoy 4 Action” was held to pressure the Federal Government to take action and follow through with the report. This saw dozens of vehicles protesting around the Alberta Legislature on Wednesday June 4, 2020.

The decision made by the Canadian Government may not be surprising given their history, however, it is still tragic.

Not only is June National Indigenous History Month, but early this morning, on June 4, 2020 the Vancouver Sun reported an Indigenous Woman was murdered by Police in New Brunswick during a wellness check.

Her name was Chantel Moore. She was 26 years old.