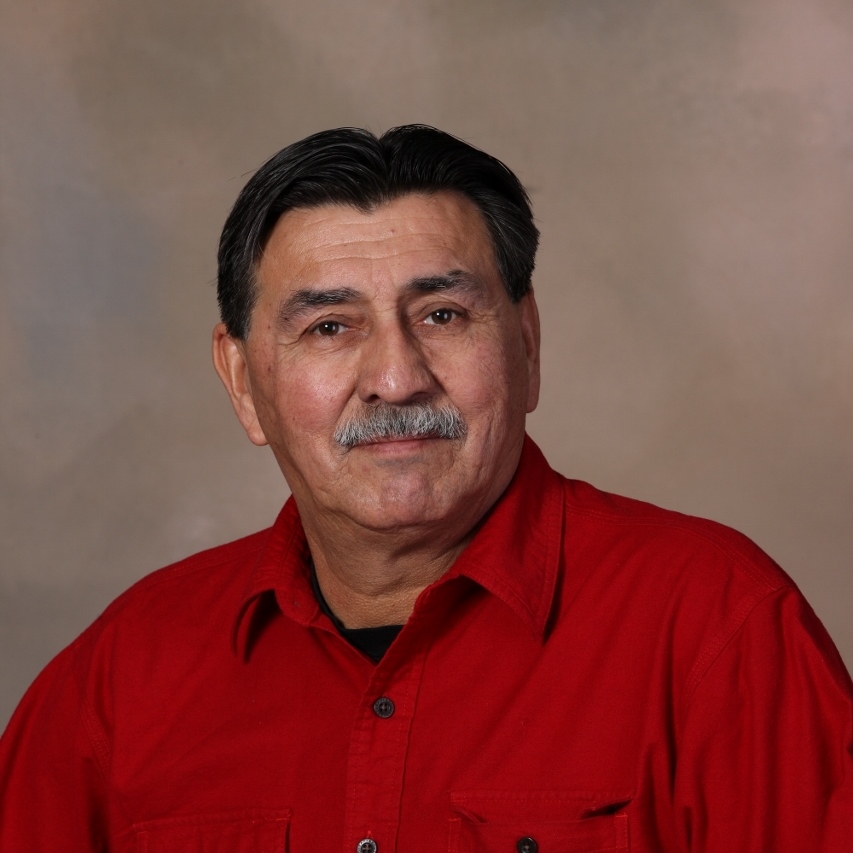 About 1400 students attended the convocation ceremonies to receive their degrees, diplomas and certificates.

Doug Golosky was awarded an honourary Bachelor of Business Administration degree. His story, his work ethic and his philosophy are an inspiration for all Albertans.

Doug Golosky took a welding truck, operated it with two of his brothers and eventually became involved in various other business ventures. His wife and companion, Carol, “was the key component” to the successes they shared. Their first four or five companies earned about $40 million in the first year and a few years later were topping the billion dollar mark. Eventually their business empire grew and expanded with moves into Edmonton and Lloydminster and Montreal, the latter of which broadened the company’s work with conventional oil and gas firms, pulp and paper mills and construction companies. 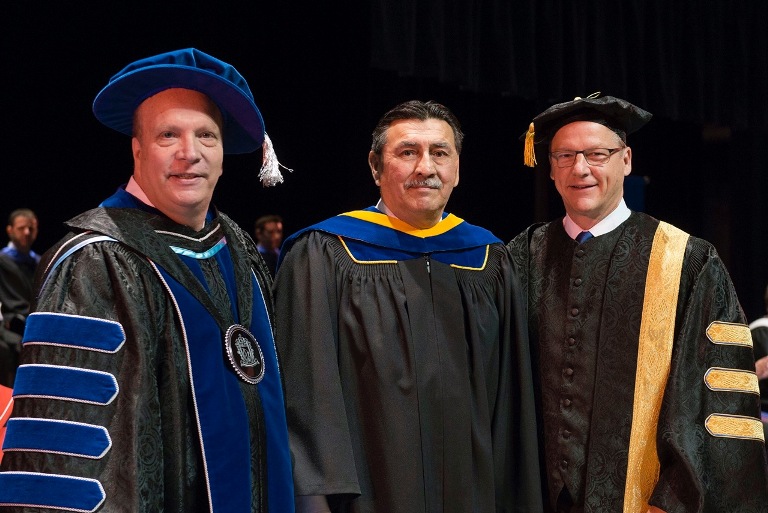 The Goloskys scaled back in 2007 when they sold about 80 percent of their holdings, some of them to employees interested in maintaining and operating their own venture. Doug has recently stepped back into the arena and today is concentrating his efforts on improving employment and other opportunities for Indigenous peoples and communities, something he has always been committed to.

Most of the companies he’s invested in provide such things as welding, pipefitting, fabricating and trucking services to the oil and gas, construction and pulp and paper industries. The 66 year old businessman, however, wasn’t born with a silver spoon in his mouth; he became very successful and he did it the old fashioned way. He worked hard and long, made the right decisions, broadened his connections and never forgot that to be successful, “you have to treat others with respect, and you need to surround yourself with honest, reliable, goal-reaching administrators and staff members.”

Golosky was born in Fort McMurray in 1949, about 46 years after his Romanian-born grandfather arrived in the region and married a Cree bride. This year the family is celebrating its 112th year in the northeastern Alberta city. As a child, Doug did what traditional families do; he worked with his dad, helped on the trapline and spent a good deal of his time hauling water, gardening, fishing and chopping wood alongside his four brothers and two sisters. To this day he still works the trapline, usually with his brothers and grandson. He understood early in life that he was expected to pull his weight, to contribute, to do his part in helping to ensure that the family met its daily goals. It was a lesson that would prove to be a valuable asset when he transformed from youth to adult.

Uncertain as to how the future would unfold, young Golosky entered one of the first welding programs offered at what was then the Alberta Vocational Centre, now Keyano College. He later attended NAIT, where he completed his certification. His brothers also became welders, and largely due to their education and apprenticeship training, they are all successful. Ensuring he had his Grade 12 diploma before entering AVC’s welding program, Golosky has high praise for both Keyano College and NAIT.

“I remain very close to both of these institutions,” he said during a recent interview. “I owe them both a great deal of gratitude; many of my family members have attended and still attend Keyano College and NAIT is a supportive, first-class institution that has helped to enhance the lives of many Aboriginal Albertans. Both institutions will always have a special place in my heart.” 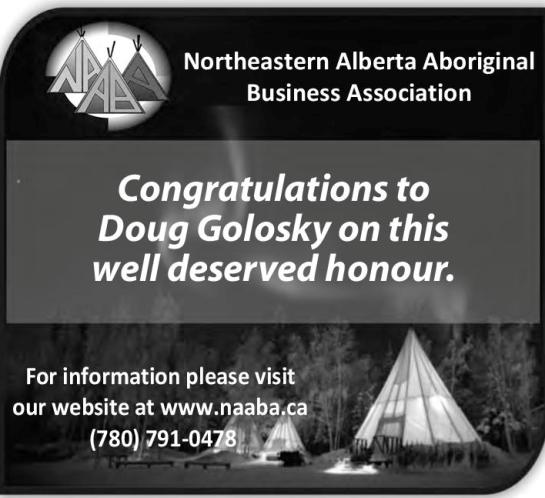 Doug Golosky’s climb to entrepreneurial success began in 1984, when together with his wife, he founded his first company, Clearwater Welding and Fabricating Ltd.

“We started with a single truck,” he reminisced, “but we worked hard; we were reliable and we were good at what we did, and the business began to take off. Over the years we owned about nine different companies, each was successful and at one time we employed more than a thousand people.”

Having scaled back in 2007, and with a non-compete agreement in place for several years after, Doug had been keen to begin developing anew. The main component of his latest partnership enterprise, Lynco Eagle, was evolved from Lynco Construction, an oilfield construction firm Golosky first established in 1986. The other two Lynco Eagle partners include the Fort Chipewyan-based Mikisew Cree First Nation and the Saskatoon Tribal Council.

“It’s a First Nation and Métis partnership designed to provide employment opportunities for Aboriginal peoples by utilizing the labour resources within First Nation and Métis communities throughout Alberta and Saskatchewan,” he explained. “Training initiatives, including apprenticeship programs, are being provided via the Saskatoon Tribal Council.”

The company currently operates from its 15-acre headquarters in Moose Jaw, Saskatchewan, with a 35,000-square-foot fabrication shop, as well as a second location in Lloydminster, Alberta, with a 10,000-square-foot shop on 7 acres of land.

Another training centre, an initiative between Golosky and The Mikisew Cree, will see the construction of a 6,000 square foot facility that will train people in Fort Chipewyan.

“We’re trying to give back to the community and we’re doing it in different ways,” he said in a recent interview. “There are a great many unemployed workers in our Aboriginal communities and if we are ever to reach our goals, that has to come to an end. We need our people to be working, to be contributing, to be sharing in the wealth. to be carving out successful careers. I want to help make that happen.”

Mr. Golosky offered a bit of advice for both workforce employees and aspiring entrepreneurs.

“There are a few special elements required to become successful,” he said, “and the first is to make sure you have a good education. The second is to show up on time for work and the third is to make sure you follow directions, ask questions and be willing to learn.”And, he added, “surround yourself with good people, people that are smarter than you, people you can depend on to do the job right the first time around.”

Doug Golosky says if you have finished Grade 12 or better, are willing to put in the effort it takes to succeed, and have an open mind and a good attitude, the sky’s the limit “you just have to keep moving forward.”

There’s an old story, an African proverb, he said, that “explains just how imperative it is keep your feet moving, because if you want to succeed you can’t take too many rest breaks. Every morning in Africa when a gazelle wakes up it knows that it must run faster than the fastest lion or it will be eaten. Every morning a lion wakes up knowing it must run faster than the slowest gazelle or it will starve to death.  It doesn’t really matter, then, whether you are a lion or a gazelle; when the sun comes up in the morning, you’d best be running.”

The Honourary Business Administration Degree Doug Golosky just received from NAIT is one of many awards this extraordinarily successful Métis businessman has had bestowed on him over the years. He’s also been the recipient of the Regional Aboriginal Recognition Entrepreneurial Award; Syncrude Canada’s Outstanding Achievement Award for Hiring/Training Practices with Aboriginal Population; the Alberta Chambers of Resources 2005 Resource Person of the Year and a National Aboriginal Achievement Award (2005) for Business and Commerce. He’s also received the President’s Award, the Ivan Ahenakew Award of the Interprovincial Association on Native Employment, and he was the Alberta Provincial winner of the National Association for Excellence in Business Education Partnerships from the Conference Board of Canada.

Over the years, Golosky has been involved with a variety of non-profit organizations that encourage youth to find their career paths, including Careers: The Next Generation. He has shown a deep commitment to supporting Aboriginal business and entrepreneurship in Alberta.

He takes the awards and the accolades in stride but assertively notes that “no man or woman can go it on their own when it comes to operating a successful venture; you have to have the right people working with you to achieve success. I owe all of my success to those employees, confidants and office staff who went the extra mile to ensure that our companies were profitable, honest and up-to-date in everything from training modules and safety practices to equipment and technology. I am very appreciative of the efforts of those who helped our companies compete in the ever-changing marketplace; without them, nothing could have been achieved.”