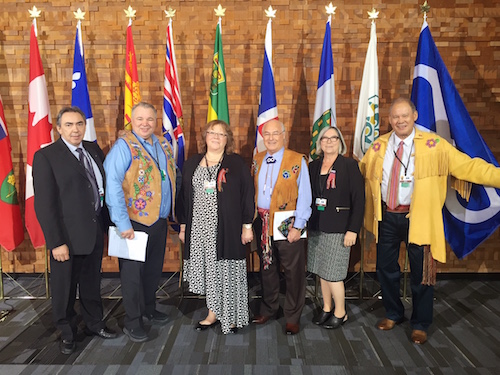 (Ottawa) – Engagement sessions across the Métis Homeland hosted by Métis Nation Governing Members will be held over the next two months for Métis survivors of the ‘Sixties Scoop’.

As a follow up to the National Symposium on Métis 60s Scoop Survivors that brought together Métis survivors and their families, held in Winnipeg on October 19-21, 2018, these engagement sessions will hear further from Métis 60s Scoop survivors from across Canada. These engagement sessions will help inform the federal government in addressing the legacy of the 60s Scoop on the Métis and to reconcile its harmful effects.

The engagement sessions will be held in the following locations:

Métis 60s Scoop survivors and their families are encouraged to participate and can find information on all the sessions at www.sixties.scoop.metisportals.ca or by calling toll free: 1-800-928-6330 ext 532.

At each engagement session, Métis 60s Scoop survivors and their families will be hosted in a safe, respectful, culturally based environment. It is an opportunity for survivors to meet with other survivors and to access support and counselling if required.

The ‘Sixties Scoop’ spans an era from the 1950s through 1990s during which thousands of Indigenous children were apprehended by provincial Child and Family agencies, placed in foster homes and adopted by non-Indigenous families throughout Canada and the United States. In 2016, the federal government announced that it would settle numerous civil lawsuits related to the Sixties Scoop initiated by First Nations and Inuit in Canada.

“This is one of many ways that survivors will have the opportunity to share their insights into the development of a Métis Nation Sixties Scoop resolution. It is important to us that survivors are given every chance to join in and be heard to help shape how this work will be done,” says Clément Chartier, President of the Métis National Council.

“We know our survivors have suffered and continue to struggle with the trauma experienced at the hands of Canada. The intergenerational impacts are still being felt by our families and survivors today,” states David Chartrand, Métis National Council Vice-President and Minister of Social Development, noting that healing the survivor will heal the family, community and ultimately bring peace to the Métis Nation.

The MNC represents the Métis Nation in Canada at the national and international levels. The Métis Nation’s homeland includes the 3 Prairie Provinces and extends into the contiguous parts of British Columbia, Ontario, the Northwest Territories and the United States. There are approximately 400,000 Métis Nation citizens in Canada, roughly a quarter of all Aboriginal peoples in the country.

From 1951 to 1991 the governments and churches of this country pursued the wholesale removal of Métis children from their parents and families. These removals were part of a larger system of colonization, a system that included the residential and day schools, the dispossession of land, and the destruction of Métis communities. Today it is unusual to find a Métis family or community who has not been impacted by the Sixties Scoop.

The Métis Nation and the government of Canada are working on a nation-to-nation basis to reconcile the wrongs perpetrated against the people of the Métis Nation during the Sixties Scoop. David Chartrand, Métis Nation Minister of Social Development, called on the federal government for a Métis Nation specific process guided and informed by Métis survivors leading to reconciliation.

As an important early step, a Métis Nation Sixties Scoop National Symposium was held in Winnipeg, Manitoba from October 19 to 21, 2018. The Symposium brought together Métis Sixties Scoop survivors, their family members, leaders, Elders, counsellors, and other stakeholders.

During the Symposium, survivors shared the devastating trauma of abuse, cultural genocide and the inter-generational impacts of being stolen from their families. Survivors who had found and returned to their birth families spoke of their healing journey through repatriation initiatives such as the Manitoba Metis Federation Lost Moccasin program. They also directed the Métis Nation to conduct regional and local sessions with Sixties Scoop survivors across the Métis Nation Homeland.

Next Steps: Engaging the Regions, Building a Framework for Reconciliation

How has the SNC-Lavalin Affair affected the Relationship of the Métis Nation with the Trudeau government?