April 14, 2016 (Ottawa, ON) – In a landmark ruling this morning, the Supreme Court of Canada (SCC) recognized and affirmed that the federal government’s duties and responsibilities apply to all three of Canada’s Indigenous Peoples including the Métis.

In reaching its decision, Justice Abella speaking for a unanimous court stated: “The history of Canada’s relationship with its Indigenous peoples, inequities are increasingly revealed and remedies urgently sought…This case represents another chapter in the pursuit of reconciliation and redress in that relationship.”  The judgment clearly “recognized that Métis and non-status Indians have no one to hold accountable for the inadequate status quo.”  The court concluded that Canada has a constitutional and jurisdictional responsibility for Métis under s. 91(24) of the Constitution Act, 1867. 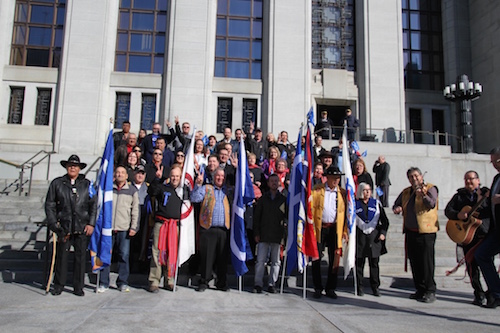 The Metis Nation celebrates the landmark ruling on April 14, 2016 in Ottawa.

Without dictating what the Government has to do, this historic decision nonetheless places a clear obligation upon the federal government to negotiate with the elected government of the Métis Nation. The court ruled against the Crown that the ruling would have no practical utility noting that “Delineating and assigning constitutional authority between the federal and provincial governments will have enormous practical utility for these two groups who have, until now, found themselves having to rely more on noblesse oblige than on what is obliged by the Constitution.”  The court reaffirmed the federal government’s duty by identifying a trilogy of cases that “already recognize a context-specific duty to negotiate when Aboriginal rights are engaged.”

In determining that Métis were included in 91 (24) the court recognized the crucial role the Métis Nation played in opening up western and northern Canada, the court stated: “It would have been impossible for Canada to accomplish its expansionist agenda if “Indians” under 91 (24) did not include Métis.   The threat they posed to Canada’s expansion was real.  On many occasions Métis “blocked surveyors from doing their work” and “prevented Canada’s expansion in the region” when they were unhappy with the Canadian Government.”

“This decision confirms what the Métis Nation has been saying for decades – Canada has a constitutional and jurisdictional responsibility to the Métis Nation. My Board of Governors and I are prepared to continue on this path of reconciliation with Canada towards a mutually respectful nation-to-nation relationship.”

In his closing remarks President Chartier noted “As the Court stated, ‘This case represents another chapter in the pursuit of reconciliation and redress in that relationship’.  We now await to hear from the Minster and her Special Ministerial Representative (Tom Issac) on the path forward for the Métis Nation.”

How has the SNC-Lavalin Affair affected the Relationship of the Métis Nation with the Trudeau government?