(ANNews) – On February 18-19, 2017, the Rocky Mountain House National Historic Site became the launchpad for Canada’s 150th birthday celebrations in Alberta. The two-day outing, which included an array of outdoor activities and participatory events, saw several hundred spectators and about two dozen Métis fiddlers, jiggers and singers join together to participate in competition, enjoy a Family Day weekend celebration and prepare for what promises to be an exciting year of events that will help to celebrate Canada’s birthday.

The weather was on the chilly side but the sun was shining as local and provincial dignitaries, Métis leaders and Parks Canada officials launched the Voyageur Rendezvous and Métis Homecoming event.

During the opening ceremonies, Métis Nation Region 3 President Marlene Lanz thanked those in attendance and noted, “it’s a great time to be Métis. Before Louis Riel was hung, he said ‘my people will sleep for 100 years; it will be the artists that awaken them,’ but I always say, we weren’t sleeping ladies and gentlemen, we were building this great country called Canada – and now it is time to build our own Métis Nation. We are doing that; those of you here today and those just beginning to learn (their identity) come and join with us and learn your Métis culture, your heritage – and help us build this Métis Nation.”

The two-day gathering and competition included a series of special events and most came off without a hitch. Warmer climates a week before the event combined with a poor snow pack this winter put an end to the dog sled races, though several exhibitions were held in their place. The horse and tractor sleigh rides, attracted the younger generation and an exhibition of Northern Games from Team NWT wowed everyone in attendance. The demonstrations included a close-up look at numerous traditional games, including the “foot pull,” a test of strength, and the Alaskan High Kick, a game that sees competitors leap from the floor and into the air as they kick a swinging ball that hangs anywhere from 10 to 15 feet above the floor. The world record, held by an Inuit games competitor is more than 19 feet.

I was somewhat surprised by the small number of competitors at what was the first event of its kind ever held at the Rocky Mountain Historical Site. It may have been the 11:00 a.m. start-times that kept competitors and their families at home during the third weekend in February, especially those who had a three or four-hour drive to the venue. Prize money in more than a dozen categories was up for grabs but the real competition came in just four categories: Adult Male and Female Jiggers and Adult Male and Female Vocals. 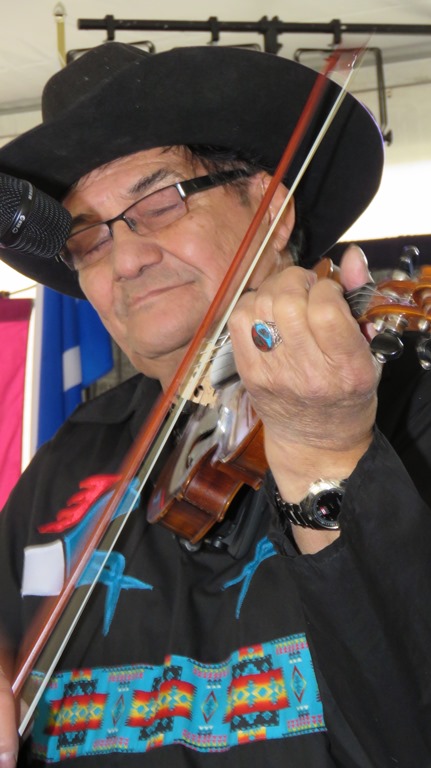 The top four winners (in the order they finished) in the Adult Male (19-59) Jigging competition were: Jayde Fiddler; Jordon Langford; Allen Boucher and Rick Swaren.

The Senior Male Jigging category had two competitors, but the Female category in the same age group only had one so the three joined together. In the end, it was Jack Flett taking first place money, Doreen Bergun taking second with Garry Lee Berthold coming in third. 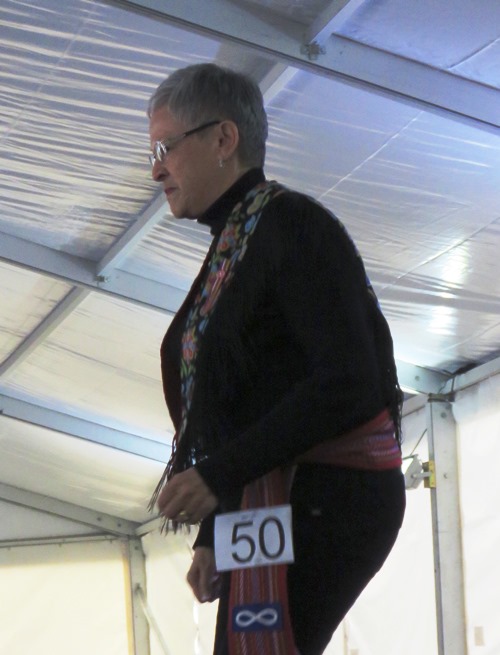 The Talent Contest entries, all singers, included at least two competitors in each of the four categories, with both the Adult Male and Female categories drawing four apiece.

The Adult Male (20-59) Vocal winner was Mickey Dietz. He was followed (in order) by Brian Lizotte, Rick Sworn and Garry Lee Berthold. 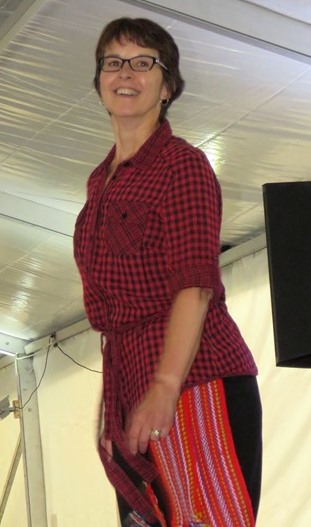 In addition to the outside events and inside competitions, visitors were treated to some very different performances by some very special performers, including the Métis Child and Family (MCF) Jiggers from Edmonton, the MacArthur Dancers from Cape Breton Island on Nova Scotia’s northeast coast and Rhea LaBrie, a dance instructor and renowned Métis performer.

The MCF Jiggers are committed to the cultural preservation of Métis music and dances. They perform at various functions and events across Alberta with several of the dancers having taught jigging lessons at various schools in Edmonton and St. Albert, as well as with the U of A and MacEwan University. The group was honoured in 2011 with an “Award of Excellence by the City of Edmonton” in the area of Arts and Culture.

The “MacArthur Dancers” are a Celtic Dance Performance Troupe based on Cape Breton Island, a location known for its strong Gaelic & Scottish roots, especially as that relates to music and dance. The troupe is directed by Champion Highland Dancer, Kelly MacArthur, and during its 20-year tenure has produced four generations of performers.

The dancers performing at the Métis Homecoming event this year ranged in age from 10-14 years. They are top level premier dancers, already well seasoned performers for their young ages. The MacArthur Dancers have performed and competed all over Canada and have won scholarships, championships, and top awards in choreography. They have danced with some of the most well-known Celtic musicians in the world. 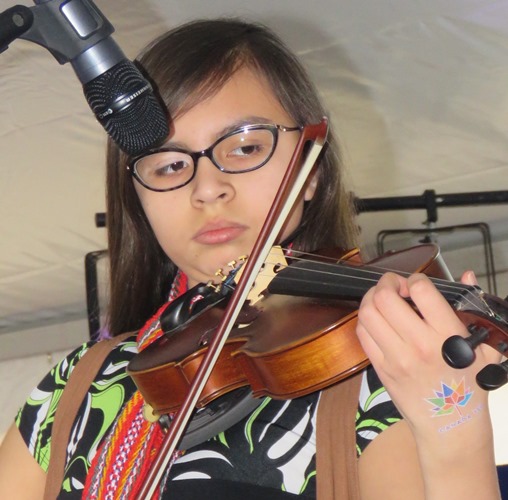 Rhea LaBrie began step dancing at a very early age. Her interests in dancing were brought to new heights when she was accepted into the National Folk Ensemble ‘Les Sortileges’ in Montreal, Quebec in 1987. During her five years with the company, she was promoted to First Dancer, and played in many lead roles. Rhea has toured throughout Quebec, Canada, the USA and Europe and has taught many workshops as part of the school curriculum in Saskatchewan.

Canada’s 150th Birthday, also referred to as Canada’s Sesquicentennial – or 150th year of Confederation, will be celebrated in a variety of unique, interesting and educational forums over the next year. Throughout 2017, notes Ottawa’s Centennial Celebrations Committee, Canada’s birthday “will be celebrated from coast to coast to coast and along all the rivers, lakes and in towns and cities and communities in between.”

This summer the Confluence Heritage Society is recreating the Centennial Voyageur Canoe Pageant held in 1967 when teams representing provinces and territories retraced the 5,283-kilometre trade route from Rocky Mountain to Montreal. This “scaled-down” version of the 1967 event will take place from July 1-22, 2017 and will include a month-long race down the North Saskatchewan River via canoe. In all, there will be stops at 18 different communities between Alberta and Manitoba. The competitors will include 26-person canoe teams, including several from Indigenous communities, who will compete in competitions as they represent their provinces and communities.

Prior to the start of the event (June 22-25) interested parties may want to take in the Fur Trade Paddling School program, a three-day interactive workshop to learn the history of the 1967 Centennial Canoe Race, fur trade, and development of the different canoes. A river safety course will also be offered. During the month of July, the Society is also planning to host a four-day, 120-km paddling event from the Kootenay Plains to Rocky Mountain House and a voyageur whitewater canoe race.

For more information on the course or the competition or to learn how you can participate as a volunteer during this and other summer events, contact Confluence Society special event coordinator Adele Poratto at 403-391-8819 or send an email enquiry to: [email protected]

Celtic and Métis cultural dancers joined on stage during the exhibition finale. 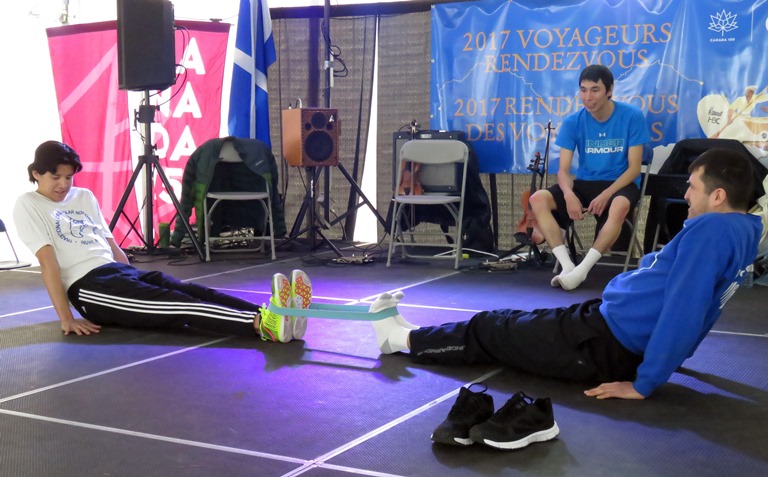 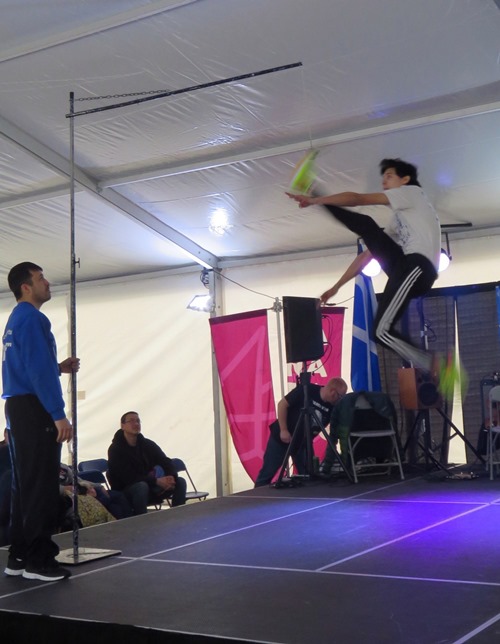 Exciting Metis jigging and fiddling celebration and competition will be held Feb. 18 &19