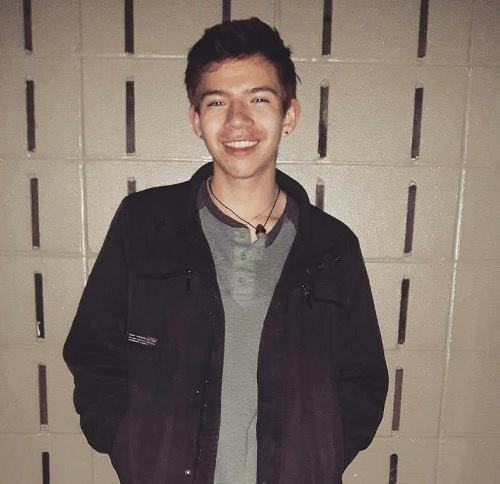 An annual award of the Alberta School Boards Association, it celebrates First Nations, Métis and Inuit students who are shining examples in their communities. Three other students were honoured as finalists.

Sheldon is dedicated and passionate about the arts, showing significant talent and creativity in music, drawing and theatre arts. He is equally passionate about sharing his Cree heritage and language.

“Sheldon is grounded by his Cree heritage and is focused on his emotional, spiritual, mental and physical well being,” said Lisa Freisen, choir teacher at Lindsay Thurber. “Some of this is demonstrated through his gifts, talents and passion for the arts. Choir, art and drama are his creative outlets. We are so proud that Sheldon plans to pursue the performing arts when he finishes school. I know it will be a lifetime commitment for him.”

Vice Principal Brian Plastow was very pleased about the well-deserved recognition. “Sheldon has truly been one of the most impressive students I have met, He is thriving at Lindsay Thurber, excelling in the arts and demonstrating high academic achievement. Sheldon is so deserving of this recognition.  He is an inspiring student demonstrating resiliency, leadership and the full potential of youth today.”

As the 2017 ISS Award recipient, Sheldon will be sponsored to attend a youth conference on leadership, and he will be recognized by the school at an upcoming event…

A record number of students – 60 from across Alberta – were nominated this year. The ISS Award Jury Committee noted the quality of this year’s nominations, including numerous detailed examples of students’ leadership qualities, steadfastness when faced with challenges, and abilities to inspire others.

The ISS Award is sponsored by Xerox Canada and presented annually by the Education Partners’
Task Force on First Nations, Métis and Inuit Student Success and Well-being.