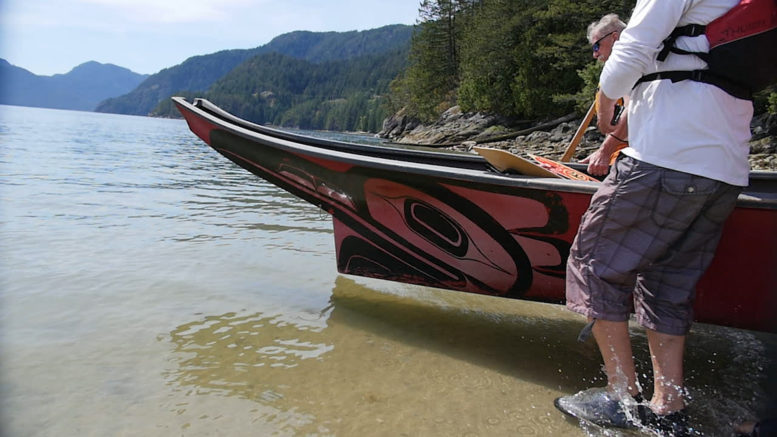 Still of a canoe healing journey from the film "Circle of Eagles: Soaring for 50 years" which will screen on May 27. Pre register to view the film for free at www.coels.ca/50thfilm/.

(ANNEws)  – Circle of Eagles – Soaring for 50 Years is an hour-long documentary celebrating the 50-year anniversary of The Circle of Eagles Lodge Society (COELS), an Indigenous non-profit that provides Indigenous Community-Based Residential Facilities (Halfway Houses) in Vancouver, BC on the Coast Salish territory.

Founded in the late 60s by Marge White, COELS has seen 1240 residents since its creation and boasts an average of 50 residents per year. What makes the organization special, is that their halfway houses focus on rehabilitation through Indigenous culture and mentorship.

The film itself is a celebration of the society, but also an incredibly heart-breaking and inspiring work as many of those interviewed — who were or are residents — share their life experiences in the federal prison system.

Without giving too much away, the film is a deeply emotional work that features some of the most beautiful and uplifting stories that have been shared on screen in a long time.

Furthermore, the uncomfortable truths of Canada’s past and current treatment of Indigenous people is also brought to the forefront with facts and anecdotal evidence.

For example, an early emphasis and conclusion you make from watching the film is that the country’s foster care system is the equivalent, if not a worse mutation, of the Residential School system.

By placing stories of Residential school survivors back-to-back with stories of those who attended foster care, you see on a human level how similar the impacts of these systems really are.

“Today we’re seeing a lot of our Indigenous children being caught up in the system,” said Merv Thomas, film director and CEO of COELS. “I think today there’s more kids in the foster care system than there was at the height of the residential school era.”

7.7 percent of all children in Canada under 14 are Indigenous, yet make 52.2 percent of children under 14 in foster care.

And currently, Indigenous people represent approximately 5 percent of the total population across Canada, yet the portion they represent of federal incarnation has reached new historic highs surpassing 30 percent.

The current pace is set for Indigenous people to comprise 33 percent of the total federal inmate population in the next three years.

And in the film, every interviewee was a survivor of Residential school or the foster care system.

However, in order to fully understand and grasp such a dense and complex notion, one must certainly watch the film.

On May 27, 2022 an online-only event will be live streaming the film, with free registration at coels.ca/50thfilm.

Then as part of the Dreamspeakers International Film Festival, the film will be playing May 27 – 29 at the Metro Cinema in Edmonton, Alberta. For more information on festival screenings, visit https://dreamspeakers.org/.

Be the first to comment on "May 27: New COELS documentary shares powerful healing journeys"