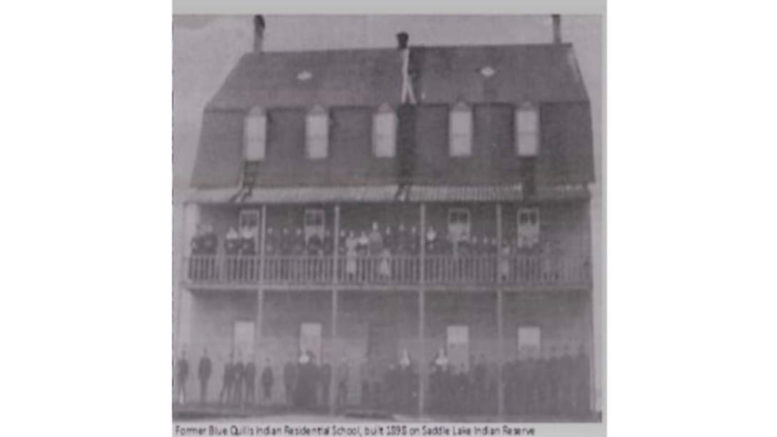 WARNING: the following story deals with very graphic imagery and may be triggering to some readers. Please advise.

(ANNews) – Earlier this month, the Acimowin Opaspiw Society (AOS) — a Saddle Lake-based, survivor-led non-profit organization leading the investigation into the Blue Quills Residential School — announced they have confirmed that at least 212 children were buried in unmarked graves during the school’s operations.

The investigation team said they confirmed the student burials in confidential records. Due to issues of privacy, the Society has said that they would like to keep their source undisclosed as the investigation is on-going and extremely delicate.

At this stage in the investigation however, it is near impossible to determine how many children died and where they were placed to rest. This is due to the long and complicated history of the Blue Quills Indian Residential School — and the general lack of record-keeping seen so consistently in the Residential School system.

To be more precise: the first iteration of the Residential School operated from 1862 to 1898 in Lac La Biche, Alberta; it then re-located to Saddle Lake Cree Nation, where it operated between 1898 to 1931; before finally settling just outside of St. Paul, Alberta — where it still stands today.

Currently, the society only has access to burial records from 1898 to 1931, which is when the Saddle Lake site — previously named the Sacred Heart Indian Residential School — was operational. Meaning that the Saddle Lake site, to which the reason the announcement was made, has no locational relationship to the current Blue Quills University.

“It was one of the most horrific residential schools in Canada,” said Eric J. Large, lead AOS investigator. “The amount of missing children is extensive… The institution was strife with violence, illness, starvation, abuse and death.”

“It can be safely stated that in our community of 12,000 people, each family has had four to five children who went missing from this institution,” he continued.

The remnants of the Saddle Lake site are so extensive that grave diggers kept uncovering child-sized remains when digging graves for recently deceased band members. This is because the Saddle Lake site eventually became the Nation’s community cemetery — and it is still currently being used today.

In regards to the accidental excavations, Saddle Lake Councillor Jason Whiskeyjack is one of the main witnesses due to his work as a part-time grave-digger.

Furthermore, the Society has said that there was also an accidental excavation of a mass grave located in the Sacred Heart site. This mass grave consisted of multiple child-sized skeletons that were wrapped in white cloth.

This means that not only were individual graves being found accidentally, but a separate mass grave was also discovered.

The Society believes the mass grave is made up of students from the Sacred Heart Residential School. They said that at one point, there was a massive outbreak of typhoid fever that caused the entire student population to perish, and that those in the mass grave are most likely those children.