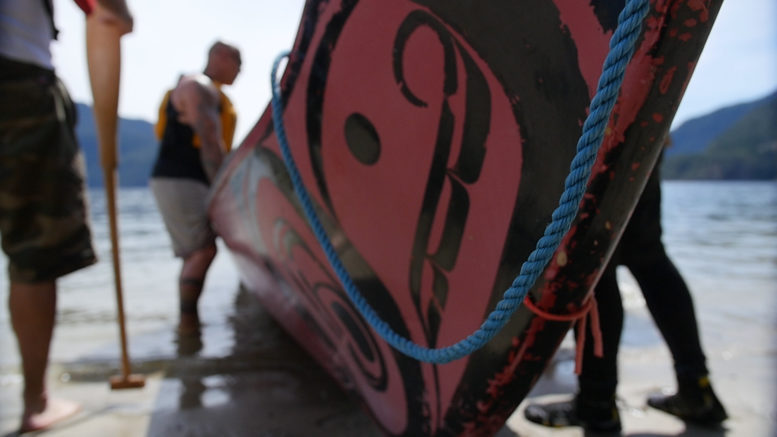 Still of a canoe healing journey from the film "Circle of Eagles: Soaring for 50 years" which will screen on May 27. Pre register to view the film for free at www.coels.ca/50thfilm/.

(ANNews) – Circle of Eagles Lodge Society began over 50 years ago. They have created a 50-minute documentary to commemorate their half a century anniversary and their profound impact on Indigenous Brothers’ journey from prisons to communities. The film “Circle of Eagles: Soaring for 50 Years” will be live-streamed for free on May 27, 2022.

Indigenous Brothers, the staff, parole and police officers tell candid stories of how culture has changed their path. It started with one woman’s dream of helping Brothers isolated from Indigenous culture in prison. 50 years later, Circle of Eagles (Naa-na-himyis) Healing Lodge provides an urban sweat lodge, healing retreats with canoe journeys, and reintegration programs; it has been home to over 1,240 people.

The documentary is already garnering attention on the film festival circuit for its stunning cinematography and powerful stories of hope and healing from the legacy of Canadian residential schools, foster care, and systemic racism. The film centres around how this unique halfway home imparts Indigenous culture and ceremony to recover from trauma.

The wind in the forest and the crackling of a home fire set the stage for stories which speak of residential schools being worse than any prison: “I have been to almost every federal prison across Canada, right to the [Special Handling Unit] SHU and I still have not found one institution as bad as I experienced in residential school, “said Ron Laprise, Circle of Eagles Brother. “No matter what I have gone through, you can never give up hope!”

The film chronicles the history of Circle of Eagles. In the late 60’s, Marge White, Indigenous rights activist and trailblazer, began to visit the BC Penitentiary Native Brotherhood. They expressed the need of an Indigenous home for themselves once they left prison. The outcome was the formation of the Allied Indian and Metis Society (AIMS) which formally incorporated May 29, 1970; and changed its name to the Circle of Eagles Lodge Society in 1995.

AIMS purchased its first half-way home (Naa-na-himyis) where over 50 years later, Circle of Eagles continues to provide cultural programs and services, such as the Sweat Lodge and other services for Indigenous people who are leaving federal corrections.

In 2000, COELS began to expand its programs and services. Beginning with building of a traditional sea-going canoe and subsequent canoe journeys contributed to the healing of participants. Following that, in 2003, COELS added the Anderson Lodge Healing Centre for Women and began to offer programs to Indigenous Sisters leaving corrections and entered into an agreement with Corrections Services Canada. It also added the “Bannock on the Run” program providing meals to Elders and persons experiencing homelessness. The program has grown to where it now serves over 35,000 meals per year.

“A major barrier to our ability to help more people is ‘Not in My Back Yard’ syndrome where people are not against halfway homes, but they’d prefer if they weren’t in their neighbourhood,” shared Merv Thomas, CEO of Circle of Eagles Lodge Society. “It’s our hope that when people watch this powerful documentary it will give them a glimpse of the positive impact our work has on communities just like theirs – to permit us to add more beds, in more back yards.”

The documentary is expected for broad release this winter after it has completed screenings at various film festivals. This limited, private screening is available to the public for free by pre-registering at coels.ca/50thfilm. It will live stream May 27, 2022 at 7:00pm – 8:30pm PST.