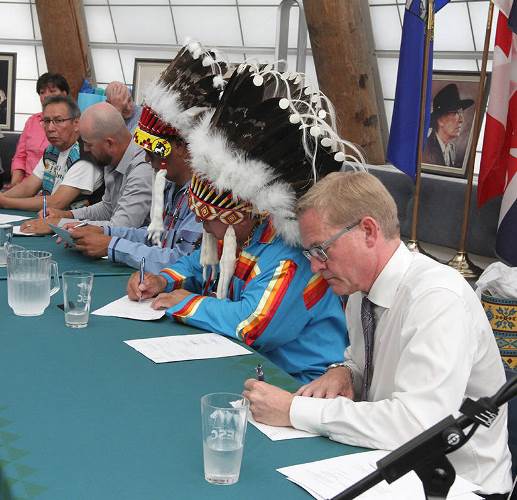 (Maskwacîs, Treaty 6 Territory) ​- On June 20, 2018, Maskwacîs Cree Chiefs hosted a ceremony to mark the signing of a provincial education framework agreement between the four Maskwacîs Cree Nations and the Government of Alberta, ensuring new enhanced education funding from the province.

Effective immediately, the Agreement outlines how the Provincial Government will support the Maskwacîs Education Schools Commission (MESC) as they develop a robust Cree-based curriculum that integrates language, culture and land-based learning while improving student outcomes such as literacy and numeracy at all levels.

It also identifies how the province can supplement any funding, expertise, training and other supports to strengthen the new Maskwacîs Cree school system—and how, in turn, MESC will share their curriculum learnings—including First Nations history, residential school history, Treaty rights and land-based programs—with Alberta Education. 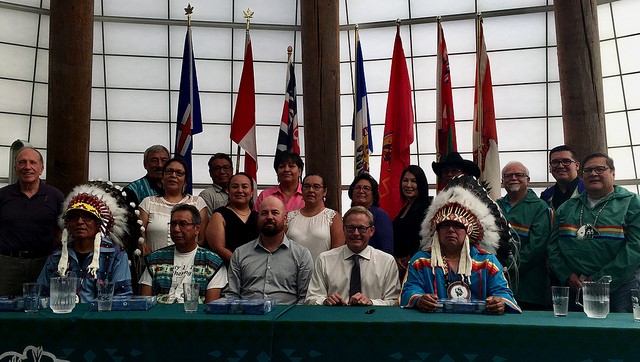 Education Minister Eggen travelled from Edmonton, Alberta to join in the formal signing ceremony. He stated,  “I am honoured to have been part of today’s ceremony. I want to extend my congratulations to the four Maskwacȋs Nations. I look forward to building a strong relationship with the four Maskwacȋs Cree Nations to support the development of this new Cree-based school system that will benefit thousands of Maskwacȋs students.”

This Agreement follows last month’s signing of the Maskwacîs Education Schools Commission Resource and Development Agreement between the Maskwacîs Cree Nations and Canada’s Ministry of Indigenous Services, which transferred full educational authority to Maskwacîs and secured a 10-year financial commitment from the federal government.

However, the Maskwacîs Cree – Government of Alberta Framework Agreement is distinct from federal commitments, as it sets out a separate Nation-specific relationship with Alberta because educational authority and oversight of First Nations schools have never been held under provincial jurisdiction. As a consequence, funding secured from Alberta is intended to enhance—not replace—federal funding. Provincial funding related to this Agreement is expected to be delivered at a later date, and will be determined once MESC submits a three-year education plan for enhanced funding support.

MESC Superintendent Brian Wildcat stated: “To be clear, the enhanced funding offered in this Agreement is contingent on the submission of a MESC education plan to Alberta Education, which will enable us to get make critical updates to our schools and programs in the first few years of operation.”

This Agreement has been in negotiations for several years, and was driven by the four Maskwacîs Nations in an effort to improve education standards for students on-reserve—with the goal of meeting, and ultimately, exceeding the high curriculum standard set by Alberta Education.

“Ultimately, it’s about the students. Everything we do, whether it’s at the Nation level or within MESC, is geared towards providing our students with the programs they need to be both academically successful and deeply rooted in their Cree culture, language, traditions, and Treaty rights,” stated MESC Board of Governors Chair Nina Makinaw.

For Maskwacîs Cree people, this framework agreement marks the beginning of a new relationship with the Government of Alberta, and begins the slow—but necessary—healing process around educational autonomy for Indigenous peoples in this province. “Although we cannot forget the legacy of Canadian residential schools, we acknowledge that the Government of Alberta has taken meaningful steps towards reconciliation as it relates to education, and we appreciate Alberta’s ongoing effort to respect our inherent Treaty right to education,” said MESC Board of Governors Vice Chair Mario Swampy.

Beginning in the 2018-2019 school year, MESC will oversee all 11 schools in Maskwacîs across the four Nations, serving more than 2,300 students from Kindergarten to Grade 12.