(ANNews) – Amiskwaciy Academy’s 2017 Fall Feast took place at the Kingsway Avenue-based school in Edmonton on Friday, October 6, and once again the annual initiative attracted a full house as parents, supporters, volunteers, community partners, donors, teachers and students from across the district joined together to bring closure to the warm months of summer as they prepare for the next few months of study. 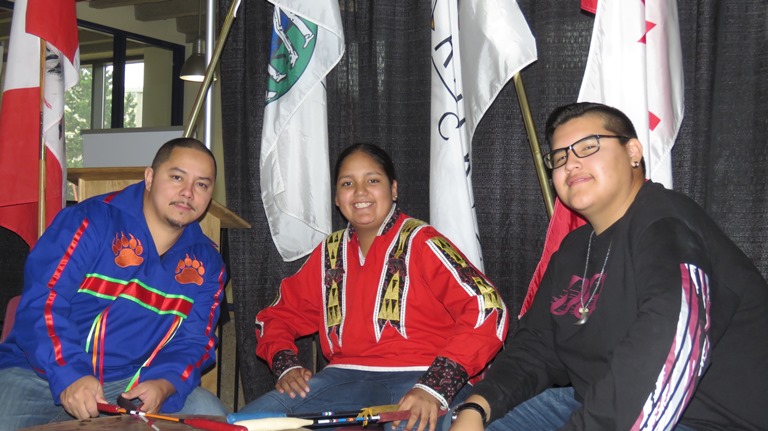 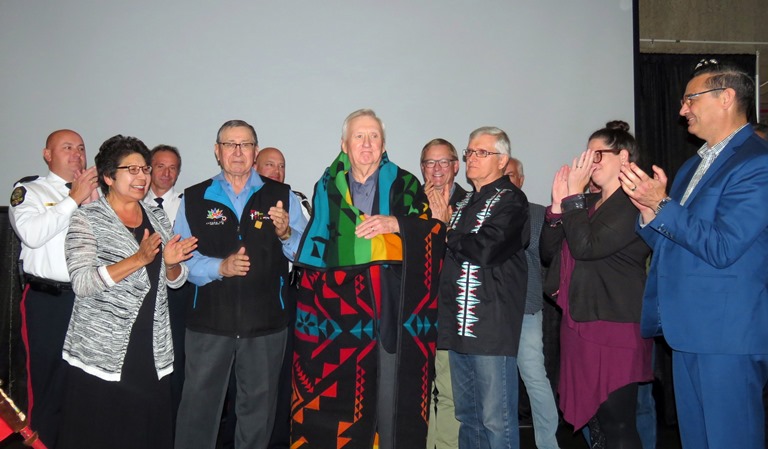 The recipient of a unique Pendelton Blanket, EPSB Vice Chair Ray Martin was joined on stage by members of the EPS as well as Education Minister David Eggen, EPSB Asst. Superintendent Kent Pharis, Elders and others.

Ray Martin was asked to comment and taking the podium smiled and noted: “It’s hard to believe that the fall season is here already.”

Martin, who was a Trustee at the school before assuming his new position last year told the gathering that he was “honoured to participate in this special day, a changing of the seasons. Coming to Amiskwaciy Academy is both enjoyable and important; a day when family and community come together to share stories and be reminded of the rich heritage shared by First Nation, Métis and Inuit cultures, something we can all take great pride in. It reminds us of the benefits we all share by keeping this friendship and culture alive, and making sure that it continues to flourish for many more generations in the years to come. 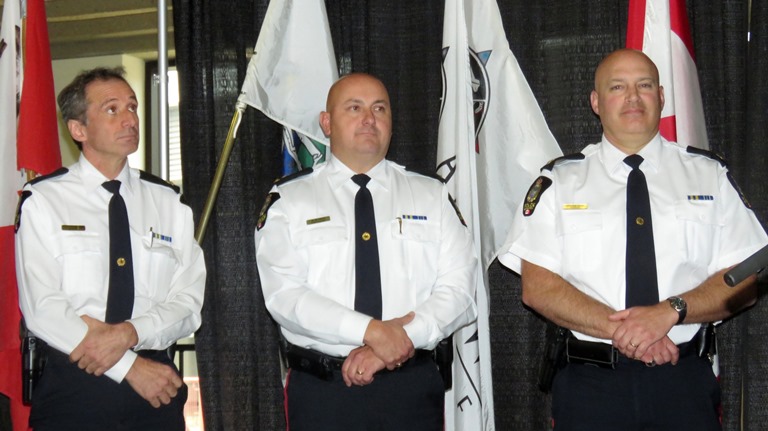 “Amiskwaciy Academy is a unique place that brings together Cree language, culture and knowledge in a positive and quality educational setting. Today’s gathering recognizes how we are all connected; Amiskwaciy’s teaching styles and learning opportunities reflect this connection through the involvement of Elders, community partners, family and a committed teaching staff that help to create a holistic learning environment. These values also reflect those of Edmonton Public Schools as we work together to transform the learners of today into the leaders of tomorrow. Today’s feast is a ceremony, rooted in strong, rich traditions of the past, but it is also a celebration of the future and the potential of new life and opportunity to come.” 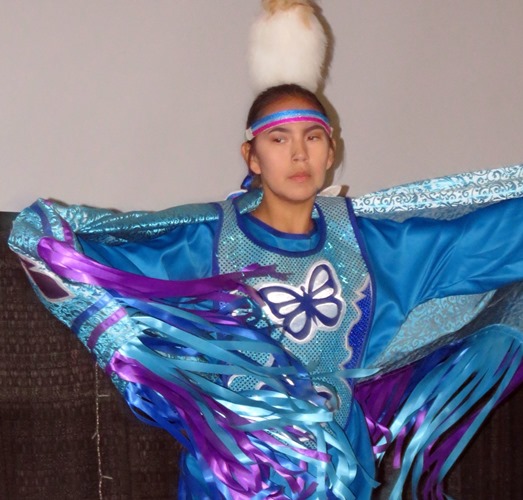 Ray Martin was honoured for the work he’s done with the school over the years both as an EPSB Trustee and a friend. In addition to a video collage that highlighted some of the new additions to the school, Hines welcomed him to the stage where he was presented with a beautiful blanket and cheered on by members of the EPS as well as school trustees, Education Minister David Eggen, school/community Elders and EPSB Assistant Superintendent Kent Pharis.

Following the presentation of the blanket and video tribute to Ray Martin for the work and the wisdom he’s left as his legacy to the academy, Minister Eggen, was asked to say a few words. 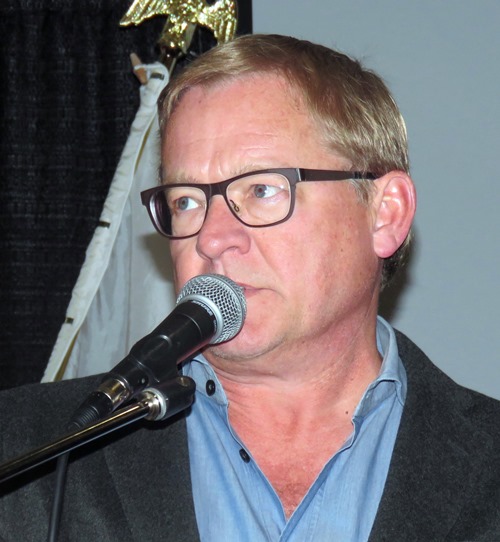 “I’m pleased to be here today on behalf my myself and the Government of Alberta, to offer a few words on Ray Martin,” said Eggen. “Ray and I have known each other for many years and worked together in the legislature. Ray has always proven to be a true leader and a valuable asset to the school system, not just here in Edmonton but across the whole province as well.”

When Principal Hines asked the audience to show their appreciation for Martin’s work, the crowd rose to its feet; the standing ovation went on for a full 60 seconds.

Eggen, twice elected as MLA for Edmonton-Calder (2012 and 2015) was sworn in as Minister of Education on May 24, 2015. He represented the constituency from 2004 to 2008, has served as a member of numerous committees and as the ND’s critic for energy, education, environment and sustainable resource development. 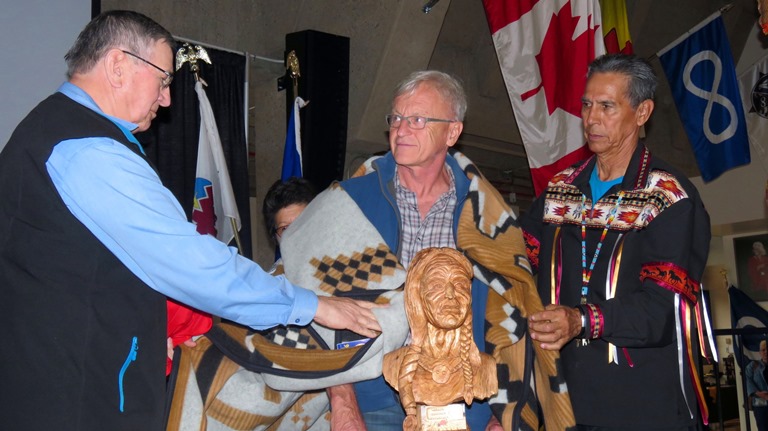 Carver Werner Groeschel was presented with an honour blanket by Elders Don Langford and Frances Whiskeyjack at the Amiskwaciy Academy Fall Feast.

Amiskwaciy Academy supporters Michael and Karen Goldstein were presented with a Raven Blanket in honour of their ongoing work with the academy and for the beautiful Serigraph entitled “Asking for Help” that they donated to the school. The stencil-based print, now displayed in one of the academy’s cultural rooms, was created by Mabel Nigiyok, an accomplished Inuit artist and printmaker from Cook River, NWT. The print depicts a man being seized by a large eagle as he pleads with the Shamans below for help. Coloured in reds, browns, blues and yellows, “Asking for Help” is a limited-edition print created in 1994.

Local carver Werner Groeschel, who donated a beautiful wood carving to the school, was also presented with a beautiful Raven Blanket for his contributions to the academy and to the community. The Woodcarver’s Association has also utilized the schools wood-working shop in the past. 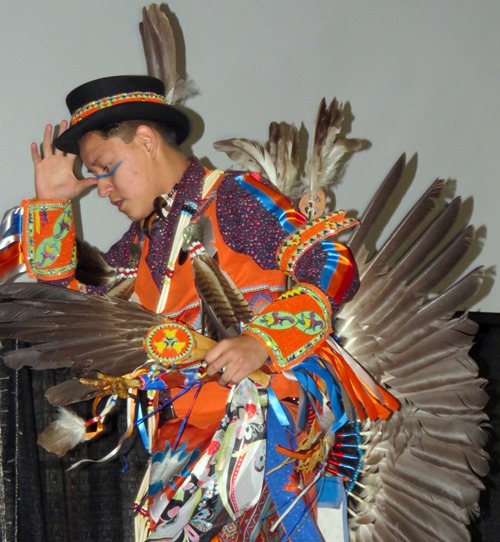 After a prayer and a few closing words from Elder Whiskeyjack, the tables emptied in orderly fashion as the line-up made its way down the hall to a buffet of scrumptious foods that included traditional beef stew, fresh bannock, buns, salads, soup, dessert and all the trimmings.

Amiskwaciy Academy is an Edmonton Public School program of choice that provides solid academic programming within an Aboriginal context. The school, which is open to students of all backgrounds and cultures, honours the Aboriginal community and reflects its cultures, values, ancestral knowledge and traditions in achieving excellence in education. In doing so it provides, with the help of school and community Elders, a meaningful and balanced curriculum, bringing together the uniqueness of Aboriginal cultures, knowledge and languages in a positive and quality educational setting.

Be the first to comment on "Amiskwaciy Academy fall feast honours students, staff and community partners"