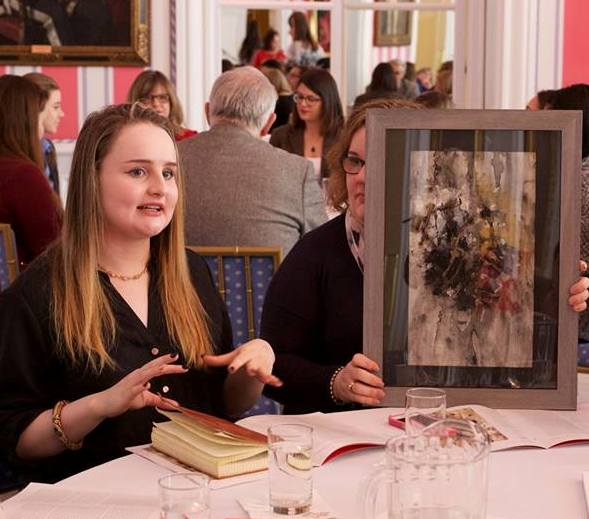 (ANNews) – Edmonton artist Angeline Gutierrez-Rain and Surrey artist Megan Benoit are two of the top 10 participants from the inaugural Imagine a Canada competition being honoured by Canada’s Governor General at Rideau Hall in Ottawa on March 1, 2016.

Their paintings were two of the top 10 entries of the nationwide contest organized by the National Centre for Truth and Reconciliation (NCTR).  The works of each winning participant was presented at the Ottawa event.

Imagine a Canada is a national art and essay competition that asks young people to share their thoughts on what the future of Canada will look like through the lens of reconciliation. The competition is open to grades 1 to 12 as well as to undergraduate students at the post-secondary level. Participants may submit works of art, poetry, film, video or traditional essays in this competition. 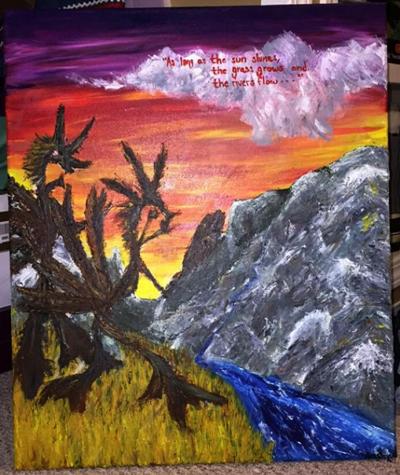 One of the top ten winning entries in the Imagine a Canada contest – by grade 12 student Angeline Gutierrez-Rain from Edmonton.

His Excellency, the Right Honourable David Johnston, Governor General of Canada, who was inducted as an honourary witness of the Truth and Reconciliation Commission (TRC), was joined by fellow honourary witness Clara Hughes, as well as by Eugène Arcand, Indian Residential School survivor and member of the Governing Circle of the NCTR. The Governor General provided opening remarks reflecting on the role of reconciliation in our country’s future. Earlier in the day, the selected participants and students from the region engaged in round-table discussions on defining meaningful involvement in the reconciliation process.

Angelina Gutierrez-Rain’s winning entry was a beautiful painting with the treaty promise encrypted at the top  – As long as the sun shines, the grass grows and the river flows…

The grade 12 student actively volunteers with arts-oriented activities her at her school – Queen Elizabeth High School in Edmonton. She has always enjoyed art as a hobby, but she didn’t take it seriously until High School where she joined an art class for the first time.

Her mom’s side of the family are also active members of the powwow community. They travel all across Alberta to powwow.

Of her family, her sister and she are going to be one of the first generations to go directly into university after graduation. Angeline plans to attend the University of Alberta. She’s the second oldest of seven siblings, and she’ll be turning eighteen this August.

Angelina is Cree and Stoney of Paul First Nations, and also Salvadorian. Her biological dad and family come from El Salvador. 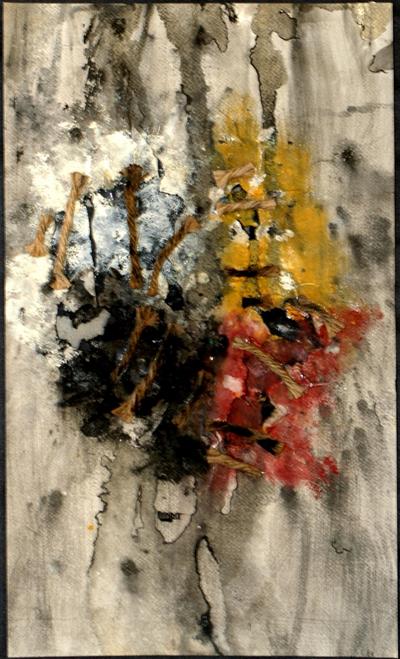 ‘Medicine Wheel’ – one of the top 10 entries in the Imagine a Canada contest – by grade 12 student Megan Benoit from Surrey BC.

Megan Benoit was born in Langley, British Columbia. With an artistic mother and a theatrical father, Megan was quickly swept into the world of literature, history and visual arts. Megan is a Grade 12 Aboriginal student at Lord Tweedsmuir Secondary School who has identified as Metis throughout her public school years. Megan has an avid interest in Aboriginal culture on both a personal and a societal basis. She has, through elementary and high school years, explored her own identity as well as learning about other First Peoples cultures.

She has taken part in various activities tied to the Aboriginal community both within and beyond school. For example, she visited a longhouse while on a French Immersion exchange to Quebec in Grade 7. This allowed Megan to broaden her knowledge of traditional customs, dances, ceremonies and regalia. In Grade 11, Megan selected to take part in another activity: the Aboriginal field trip to Sechelt where she learned about Sechelt story, history, sculpture and community. In Grade 12, Megan brought her Aboriginal perspective to life by entering her abstract art piece, “Medicinal Healing.”

She explains that this piece of art is an “abstract interpretation of the medicine wheel. While one cannot erase the turmoil that the Aboriginal people have experienced, and still experience to this day, one can attempt to sew it back together. The medicine wheel represents four main concepts: physical, emotional, mental and spiritual realities. These core concepts have been tarnished by the racism institutionalized by the Canadian government, and the Aboriginal people, in consequence, will never be the same. But one can hope that eventually it will heal, leaving only a scar, instead of the gaping gash of today.”

“On behalf of the Government of Canada, it is my pleasure to offer congratulations to both the recipients and all the participants of the “Imagine a Canada” national art and essay competition. Canada’s youth play such a critical role in realizing reconciliation. This is a multigenerational journey that requires all Canadians, Indigenous and non-Indigenous, young and old, to be active participants. Through art, poetry, and essays, today’s recipients are not just leading the way in imagining a future Canada , but are also actively working to make that future our reality.

“All these beautiful and creative works are on display and accessible at the National Centre for Truth and Reconciliation in Winnipeg. I encourage each and every Canadian to visit the centre to view the submissions and learn more about the history of residential schools in Canada’s past and visions of truth and reconciliation in Canada’s future.

“We should all be proud of Canada’s youth, both Indigenous and non-Indigenous, for inspiring and motivating all Canadians as we move into the next 150 years of our country.

“Thank you to the Truth and Reconciliation Commission and the University of Manitoba for organizing this contest that sparked creative ideas on making Canada a better country for everyone through reconciliation and peace.”

Click here for more information about the National Truth and Reconciliation Centre and to view the remaining 8 winning entries in the Imagine a Canada contest as well as those that received Honourable Mention.

Seeking answers and lessons learned from the IRS Settlement