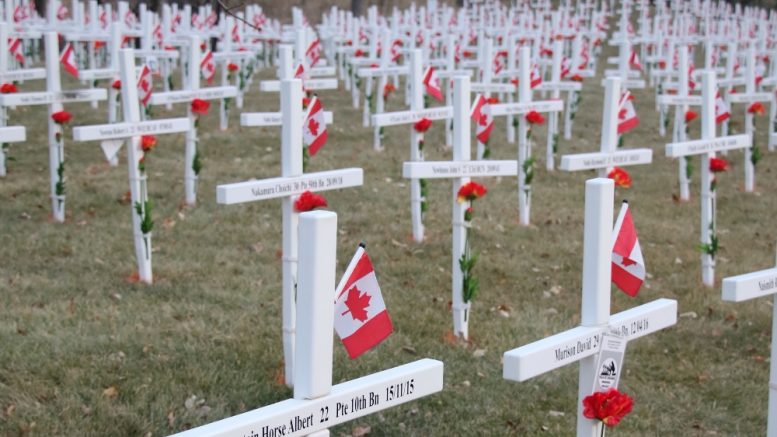 Honouring the gravesites of Indigenous veterans with poppies and Canadian flags.

(November 2019) – The Last Post Fund’s mission is to ensure no veteran is denied a dignified funeral and burial, in addition to a military gravestone due to insufficient funds at their time of death.

At the start of 2019, the Last Post Fund introduced the Indigenous Veterans Initiative, an initiative that is consistent with the Canadian government’s efforts towards advancing reconciliation and renewing the relationship with Indigenous peoples based on the recognition of rights, respect, cooperation and partnership. This initiative has two components: to provide grave markers to Indigenous veterans deceased for over 5 years and lying in unmarked graves, and to add traditional names of Indigenous veterans to existing military grave markers. Veteran’s families also have the option of asking for a culturally relevant symbol for the headstones.

Indigenous Program Coordinator, Maria Trujillo has started to reach out to First Nations communities throughout Canada to inform them of the Initiative and to identify local researchers that may be interested in helping to find the unmarked graves of veterans in their communities. Researchers are provided with a list of possible veterans from their community and with an honorarium in recognition of their work.

The Initiative is working with a list obtained from amateur historian Yann Castelnot. Last year, Castelnot was awarded the Sovereign’s Medal for Volunteers for gathering and researching the names of over 18,000 Indigenous veterans that served in the Canadian Armed Forces in WW1, WW2, and the Korean War.

According to this list there are 771 Indigenous Veterans from First Nations throughout Alberta that participated in WW1, WW2, and Korea. So far, the Indigenous Veterans Initiative has been in contact with the Blackfoot Nation to help find unmarked graves there.

Warrant Officer retired Glenn Miller from Lethbridge, Alberta is a veteran and military historian. He is but one of a recent number of both military veterans and civilian volunteers who joined the Alberta branch of the Last Post Fund. Miller has over the past decade, been researching Indigenous veterans from Treaty 7 and was invited to be a guest speaker for the Kainai Remembrance Day service the last two years. He was also a speaker at the Calgary Military Museums event marking November 8 as Aboriginal Veterans Day. Miller has learned that the Blood Tribe contributed the largest number of warriors from Alberta nations in both WW1 and WW2 according to Department of Indian Affairs files.

In British Columbia, where 1155 Indigenous veterans were identified according to this list, Trujillo has been in contact with various First Nation throughout BC, and is working with researchers from the Squamish Nation, and First Nations in the Nicola Valley.

In Saskatchewan, Trujillo hopes to find more researchers to help find the unmarked graves of the 3060 Indigenous veterans listed as having served, with over half of those listed as Métis veterans.

Nineteen Indigenous veterans from First Nations in the North Western Territories are listed has having served. According to the Last Post Fund, they cannot verify the accuracy of the list so there may be more. The initiative will also provide tombstones for Rangers lying in unmarked graves. The Fund does not have a list with the number of Rangers that served, for this reason they hope to collaborate closely with First Nations communities throughout the North Western Territories.

If you think that a family member or a member of your community may qualify for this program, or if you would like to contribute to the community research effort, please contact Maria Trujillo, Indigenous Program Coordinator at
1-800-465-7113 extension 222, email: [email protected].

Saluting the important contributions of Indigenous veterans in Canada