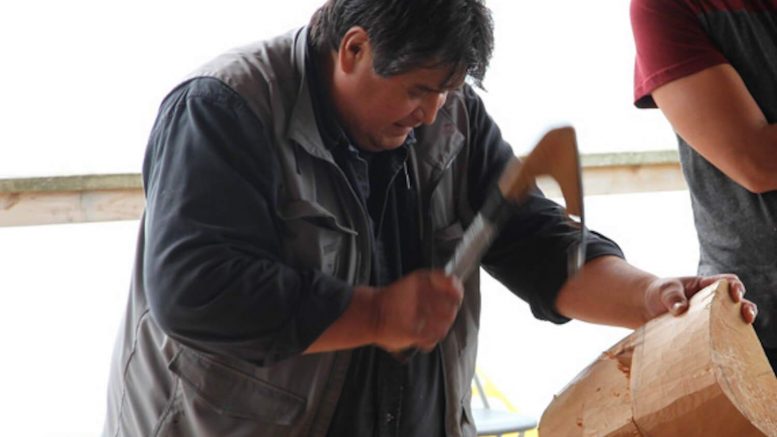 January 2019, Vancouver, B.C. – In recognition of the UN 2019 International Year of Indigenous Languages, which officially launched January 28, 2019 in Paris, the First Nations Education Foundation (FNEF) has announced the commissioning of a Language Revitalization Pole to draw attention to the importance of Indigenous language and culture in Canada. The Language Revitalization Pole will be carved by renowned Nuu-chah-nulth carver Tim Paul – part of the Hesquiaht Tribe of the Nuu-chah-nulth Nations – and has received the patronage of the Canadian Commission for UNESCO.

The stories and themes carver Tim Paul has selected to be featured on the pole honour ten relatives of the Nuu-chah-nulth people: sky, sun, moon, mountains, rivers, lakes, land, sea, wind, and stars. There is also an eleventh relative that will be depicted on the pole: earthquake, which is sent to teach humility and remind human beings of the all-encompassing power of the Creator.

“Oral history, songs, dances, ceremony, and art were – and continue to be – the vehicle for transmitting history, knowledge, and sovereign rights from generation to generation,” said Tim Paul. “Through storytelling we are also reminded of our family ties to neighbouring tribes and Nations. When we use our language, it is not just another way of saying something; the principles of our culture are embedded in the language and many words simply cannot be translated. It is only by understanding our language that we can unlock the most important values, principles, and concepts of who we are.”

Les Doiron, the volunteer chief executive officer of FNEF and elected President of the Yuułuʔiłʔath Government (the Ucluelet First Nation), says carving the Language Revitalization Pole will not only bring attention to the threats facing Indigenous languages, but will also create content for the innovative language revitalization pilot project currently underway in the Yuułuʔiłʔath community where the Barkley dialect of the Nuu-chah-nulth language is at imminent risk of becoming extinct: At present there are fewer than seven Elder fluent speakers from the Ucluelet First Nation who still speak this dialect.

“This pole will not only raise awareness of the threats facing Indigenous languages in Canada and around the world, it will also draw attention to the urgent need to advance reconciliation and healing by supporting Indigenous peoples and communities in their efforts to preserve and promote their languages and cultures through innovative solutions,” said Doiron.

Two months ago, in early December of last year, and with the blessing of the Huu-ay-aht First Nations, Master Carver Tim Paul, along with Port Alberni Carver George Nookimus, FNEF Executive Director Scott Jeary, and several others toured the Huu-ay-aht Treaty Settlement Lands and Western Forest Products TFL 44 areas to evaluate the condition of potential carving logs for the Language Revitalization Pole. They were able to locate an ancient cedar tree – estimated to be approximately 800 years old – that fell naturally during a windstorm blowdown event around 50 to 70 years ago on what is now Huu-ay-aht Treaty Settlement Lands. Western Forest Products will assist with the transport of the log to the carving site in Port Alberni now that a thorough inspection by Tim Paul has confirmed the log’s integrity.

As carving begins, documentary cameras led by filmmaker Dale Devost will follow the entire process – with the footage to be used later in education tool kits for distribution to the 11,000 UNESCO Associated Schools Network (ASPnet) in over 180 countries and as content for language lessons on the FNEF platform.

Fundraising efforts are currently underway to support the pole project and the Ucluelet First Nation Nuu-chah-nulth, Barkley dialect, language revitalization pilot project. The estimated cost of the Indigenous Language Revitalization Pole and pilot project is pegged at $1 million, with a project budget breakdown of $150,000 for carving (students, guest carvers, tools, location costs), $100,000 for logistics (tree, transportation, staging, raising, etc.), $650,000 to complete the Nuu-chah-nulth Language Preservation Pilot Project and expand it to include the other 13 Nuu-chah-nulth nations, communities, and dialects, and $100,000 for a documentary, ceremony, and promotion.

In addition to the patronage of the Canadian Commission for UNESCO, the project has received support from the Huu-ay-aht First Nations, Western Forest Products, the University of Victoria, the Royal BC Museum, BC Chamber of Commerce, Museum of Vancouver, RBC, Teck, Intefor, AME, TimberWest, and several other organizations and individuals and First Nations.

In addition to the Ucluelet First Nation, FNEF is in discussion with the Haisla Nation in Kitimat and other First Nations in Canada who have asked how FNEF can help with their language revitalization efforts.

In Canada, there are approximately 60 Indigenous languages, each with unique dialects, histories, and cultural traditions. Alarmingly, almost three-quarters of these languages are at risk of being lost within this generation. If these languages become extinct, Indigenous nations risk losing their cultural identities forever.