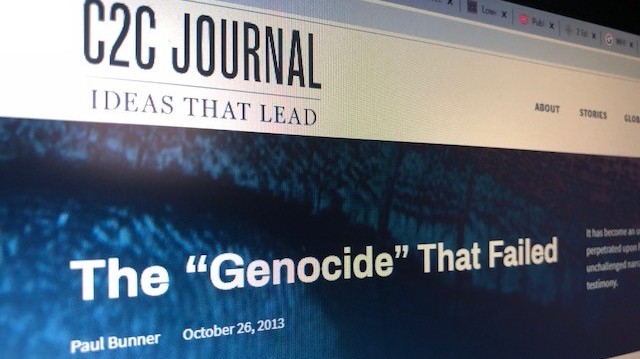 "The 'Genocide' That Failed" by Paul Bunner was published in the C2C Journal in 2013.

(ANNews) – In 2013, Alberta UCP speechwriter wrote these words in an essay:

“A community of people who are willing to give up their personal freedom to an oppressive, collectivist regime is a pretty sorry excuse for a culture. Moreover, it is a perfect recipe for real genocide.”

The United Conservative Party of Alberta is coming under some heat for employing a racist, homophobic, and all around terrible person to write the speeches Premier Kenney uses.

In an essay published in 2013, entitled “The ‘Genocide’ That Failed,” Paul stated that the Residential Schools which abducted, abused, raped, murdered, and disregarded Indigenous Children (which lasted well into the 1990s) is nothing more than a “bogus genocide story” used to fuel “ripe recruits” for insurgencies.

He argued that if Indigenous youth were “indoctrinated” into believing the Canadian Government tried to systematically and consciously destroy their ancestors, then an Indigenous uprising was “frighteningly plausible.”

In 1879, John A. MacDonald, the first Prime Minister of Canada said famously: “When the school is on the reserve, the child lives with its parents, who are savages, and though he may learn to read and write, his habits and training mode of thought are Indian. He is simply a savage who can read and write. It has been strongly impressed upon myself, as head of the Department, that Indian children should be withdrawn as much as possible from the parental influence, and the only way to do that would be to put them in central training industrial schools where they will acquire the habits and modes of thought of white men.”

Bunner and the LGBTQ+ Community

In the conservative weekly newsmagazine Alberta Report in August 1997, Bunner wrote that “AIDS gets more ink than it deserves.”

In the same publication, Bunner wrote an editor’s note in 1993 which defended an essay entitled, “Can gays be cured?”

“100,000 abortions a year in Canada is a social tragedy, that homosexuality is individually and socially destructive,” Bunner also wrote.

I could go on about the other things Paul Bunner has said, but he’s getting more ink than he deserves right now. But if you would like to know more you just have to Google a bit.

Indigenous leaders call for his termination

The Confederacy of Treaty Six First Nations released a statement which called for the resignation of Jason Kenney’s speechwriter, Paul Bunner.

The Treaty Six chiefs said, “It is clear that he does not have the ability to see past his own privilege and prejudice to apologize for insulting our Indian residential school survivors and their children.”

They go on to say “Any government with an interest of building trust with Indigenous communities must hold their employees accountable for blatantly discriminating against Indigenous peoples.”

“It is painful to read something as profoundly racist as the words Mr. Bunner wrote and published. I am deeply troubled that Jason Kenney selected someone who holds these views to be one of his closest collaborators in the premier’s office.

“It is disturbing to think of how many of the premier’s public statements over the past year have been composed by someone who harbors such hatred towards Indigenous people.”

Marlene Poitras, the Assembly of First Nations’ regional chief for Alberta, said of Bunner’s beliefs, “It severely undermines the horrific experience of too many First Nations children and families during the residential school era,” she said. “Mr. Bunner also claims that learning about Aboriginal history, injustices and trauma would incite Aboriginal violence, creating Aboriginal terrorism. That is pure and utter hate and fear-mongering, and I strongly condemn the racist undertones of the article.

“Mr. Bunner’s article calls on media, academia and politicians to create a counter-narrative to Indigenous historical trauma and long-standing impacts,” Poitras said. “That is concerning, considering his access. He may only be a speechwriter but he has a personal agenda and my concern is those views reflect on the current government.

“I think it would be wise for the premier to contact Indigenous leaders and reassure them that the views contained in this article do not reflect the views or intentions of his party or government.

“That said, actions speak louder than words. It would go a long way to regain Indigenous people’s trust in the government if they knew someone who had so much hate towards them was no longer working for Mr. Kenney.”

Jason Kenney himself said, “Somebody who was a journalist for 40 years undoubtedly wrote things with which I disagree. That does not reflect or change the policy of the government of Alberta.”