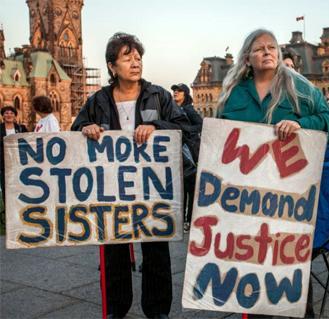 (April 2017) – The Coalition on Missing and Murdered Women and Girls in BC is concerned about the National Inquiry and is calling on the Commissioners to reach out now to family members and survivors and set out the plan for systemic investigation.

The Coalition on Missing and Murdered Indigenous Women and Girls in British Columbia is a broad network of grassroots organizations and individuals who have come together to address the crisis of murdered and disappeared Indigenous women and girls in BC and Canada. The Coalition is a keen supporter of the National Inquiry and wishes to assist the Inquiry’s work.

Provinces and territories have also convened family meetings and roundtables over the last few years. They too have contact information for family members and survivors, as well as knowledge of the Indigenous and community organizations who are in touch with them.

We understand that there are legal obligations with respect to privacy and that, further, the Commissioners do not wish to be seen to be putting pressure on families and survivors to come forward. We recommend that the National Inquiry immediately and publicly request all levels of government, and all Indigenous organizations, to contact family members and survivors with whom they have contact and ensure that they are aware of how to register with the National Inquiry to be a witness.

National Inquiry Needs to Reach Out

The Coalition believes that the passive stance of the National Inquiry mentioned above is conveying the wrong message to families and survivors, whom, we believe, need to know that they are wanted and needed in order to make the Inquiry a success. They have valuable information and experience that the Inquiry needs to hear in order to help solve the crisis that is before us. The Commissioners must encourage family members and survivors to come forward.

The Inquiry also needs to convey the message publicly that they wish to hear not just from women and men who are related by blood to missing and murdered Indigenous women and girls but also from those who were ‘families of the heart’ since so many Indigenous women and girls are separated from their birth families and communities. The Inquiry also needs to encourage women who have survived violence and had ‘close calls’ to come forward.

Recently, the National Inquiry posted notices outlining how groups can apply for standing with the Inquiry in order to participate in institutional and expert hearings. The Coalition is concerned that the deadline for applying is short and that the National Inquiry has not set out a plan of the evidence and issues it intends to canvass. In the absence of such a plan, applications for standing are, necessarily, somewhat speculative. The Coalition urges the National Inquiry to outline its plan of evidence and issues it intends to canvass, with a time frame, so that groups can better assist the Inquiry by identifying the information and analysis that will be most useful to the Inquiry process.