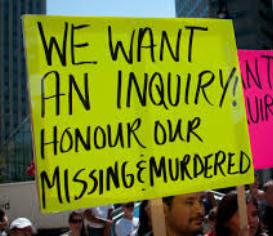 The Government of Canada has announced the launch of a national inquiry to address the high number of missing and murdered Indigenous women and girls.

The Government will immediately begin engaging with survivors, family members and loved ones of victims, as well as National Aboriginal, provincial, and territorial representatives to seek their views on the design and scope of the inquiry. These meetings will be led by the Honourable Carolyn Bennett, Minister of Indigenous and Northern Affairs, the Honourable Jody Wilson-Raybould, Minister of Justice and Attorney General of Canada, and the Honourable Patty Hajdu, Minister of Status of Women.

“Missing and murdered Indigenous women and girls represent a heartbreaking national tragedy that must be addressed immediately. Inaction ends today. This is why we need to hear from all Canadians – especially survivors, families and loved ones, Indigenous organizations, and provinces and territories – to help us identify the best process for this inquiry,” said Carolyn Bennett, Minister of Indigenous and Northern Affairs

In the New Year, meetings will continue across Canada that involve family members and a range of provincial, territorial, justice and front-line workers, as well as Indigenous women’s organizations. The Government of Canada believes that an inquiry into missing and murdered Indigenous women and girls can only be designed after hearing from those directly affected.

“The unanswered calls for a national inquiry into missing and murdered Indigenous women and girls in Canada end today,” stated Minister of Justice of Attorney General of Canada Jody Wilson Raybould. “The launch of this inquiry is an important step towards a renewed, nation-to-nation relationship and sense of trust between the Government of Canada and Indigenous peoples in Canada.”

A discussion guide has been developed and will soon be available on-line to help focus meetings on this inquiry design process. It highlights important elements and key questions about the inquiry’s potential design. This includes questions about who should conduct the inquiry, the length of the inquiry, who should be heard, and what issues should be considered. Canadians and stakeholders are also encouraged to submit their own answers to these questions in a soon to be launched on-line survey.

“We recognize that a number of factors, like racism, marginalization, sexism, and poverty have contributed to the ongoing tragedy of murdered and missing Indigenous women and girls,” noted Patty Hajdu, Minister of Status of Women. “This inquiry is necessary to address and prevent future violence against Indigenous women and girls. These women are not statistics – they are daughters, sisters, and mothers – and they have the right to live safely and free of violence.”

Indigenous families, communities and organizations, as well as non-governmental and international organizations have urged the Government of Canada to take action and lead a national Inquiry.  The Truth and Reconciliation Commission’s Calls to Action include the call for a national inquiry on missing and murdered Indigenous women and girls.

“At the end of this engagement process, the Government will report back on what has been heard from the participants. The views and ideas expressed by all participants will allow the Government to develop the inquiry, including the mandate, the terms of reference, the format of the Inquiry, and the timeline,” explained Minister Bennett.

“The Government of Canada is committing to an inclusive and respectful engagement process.  Balancing a diversity of viewpoints to design the inquiry will respond to the needs and expectations of the survivors, family members, and loved ones of victims.”

Be the first to comment on "Inaction ends today: Canada launches Inquiry into Missing and Murdered Indigenous Women"