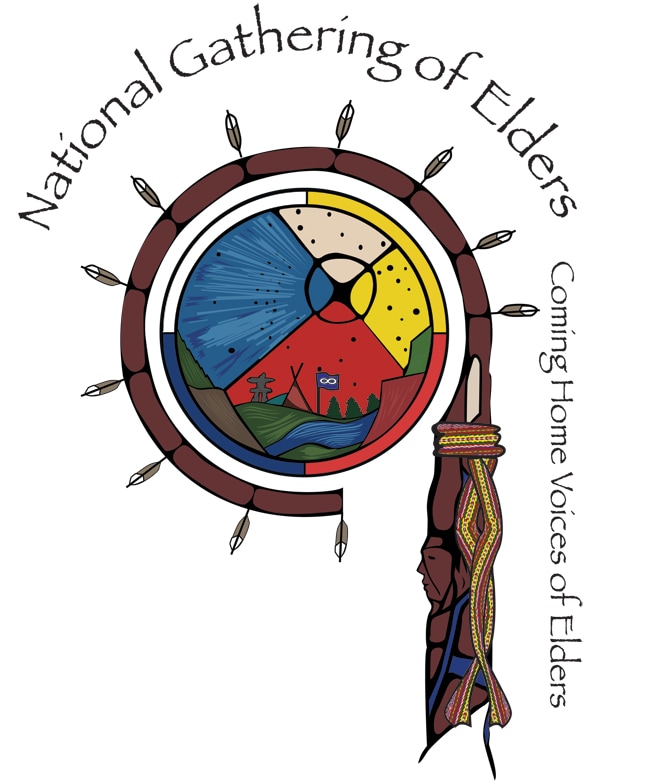 (August 23, 2017, Edmonton, AB in Treaty 6 Territory) –  In less than a month well over 1600 Indigenous elders and seniors from across Canada will be arriving in Edmonton, Alberta for the National Gathering of Elders 2017, and organizers are facing a funding shortfall.

“We are appealing to all levels of government, corporate Canada and private donors to consider contributing to this historic and worthwhile event,” said event co-organizer Judy Kim-Meneen, “The budget for hosting the event is 1.5 million dollars and we are approximately $450,000 short of our fundraising goal.”

“The Gathering marks the first time in Canada’s history that First Nations, Metis and Inuit elders and seniors from every region will come together in the spirit of friendship and reconciliation,” said Treaty 8 Grand Chief Rupert Meneen, Chief of Tallcree Tribal Government and host First Nation for the Gathering.

“Building on the theme ‘Coming Home, Voices of Elders,’ the National Gathering of Elders will be a place for laughter and the sharing of culture, traditions, history, and an opportunity for the creation of long lasting connections. First Nations, Metis and Inuit Elders from all across Canada, as well as youth and the general public are all invited to this historic event.

Planned activities include opening and closing ceremonies featuring a parade of Nations, health and wellness sessions, Indigenous art exhibits, a tradeshow, and discussion forums on climate change, missing and murdered Indigenous women and girls, revitalization of Indigenous languages and culture, Indigenous cycle of life and reconciliation. There will be an intercultural showcase featuring Indigenous entertainers, a talent show, cultural excursions and dance socials.

“Alberta Indigenous leadership, Elders Advisory Council, and coordinators have been working diligently to gather funds and have approached different business, industries, levels of government and foundations. We are very thankful for the sponsorships and contributions we have received thus far,” said Grand Chief Meneen.

“The organizers are hopeful that the federal government will reconsider its current level of sponsorship,” said Craig Makinaw, Assembly of First Nations Regional Chief for Alberta, and whose office is assisting in the coordination, “although Indian and Northern Affairs Canada Alberta Region did provide a contribution of $150,000, it was well short of the funding request of $700,000 that was made to the office of the Minister Carolyn Bennett, Indigenous and Northern Affairs Canada last year.

“With Canada 150 events, activities and celebrations happening all across Canada with an estimated budget of half of billion dollars, and a fireworks display that cost over a quarter million dollars, we think a significant contribution from Canada is called for. Elders hold our history, they are here to guide us into the future, we owe it to them to make the next 150 years something worth celebrating and having an event such as the National Gathering of Elders, where they will be honoured and cared for is a good start.”

“The National Gathering of Elders is a unique and historic event meant to bring elders from across the country and from diverse indigenous communities together. This is the first time that anything like this has been done and all orders of government in this country should be working together to support this cause,” said Gerald Cunningham, Metis Settlements General Council President.

“We are disappointed that, notwithstanding timely requests, continued efforts by the gathering’s organizers, and the historic nature of this event, the Government of Canada is not being responsive to requests for financial resources. They have supported many other Indigenous activities and it is my hope that they will work with the organizers of this gathering to ensure it is the best possible event.”

“The Metis Nation of Alberta fully supports the National Gathering of Elders’ Coming Home Voices of Elder’s conference.  This will be a historic event, where our Elders and Seniors from across the homeland, and Treaty lands, will gather together for the first time in history.  Elders from First Nations, Metis and Inuit, will gather in the spirit of sharing wisdom, stories, their cultures and traditions.  We truly believe that this historic event should be supported by all,” said Audrey Poitras, President of the Metis Nation of Alberta.

In addition to corporate sponsorships, revenues for the Gathering are being generated through registrations and a tradeshow. Fundraising activities include a golf tournament on September 10th and a Networking Gala the evening of September 11th.

“We recognize that not everyone can be a sponsor, however, there are many opportunities to contribute to the success of the event. There are still quite a number of volunteer opportunities available. Business, corporations, Colleges and Universities can purchase a tradeshow booth, or sponsor a booth for local Indigenous crafters. Grocery, health food and convenience stores can contribute nutritional items such as cheese, cookies, yogurt and fruit for the Elders rest areas,” said Kim-Meneen.

The 2017 National Gathering of Elders was the vision of Chief Rupert Meneen, Tallcree Tribal Government and Grand Chief of Treaty 8 First Nations (Alberta), and is the culmination of twelve months of planning, spearheaded by a National Gathering of Elders Advisory Council and a core group of organizers from Treaty 6 and Treaty 8 First Nations (Alberta), the Metis Nation of Alberta, Metis Settlements General Council, Inuit Edmonton and the Assembly of First Nations – Alberta.