(ANNews) – When four and a half thousand Indigenous Elders made their way into the spacious Hall ‘D’ meeting room at the Northlands Expo Centre on September 11, 2017 it brought fruition to a vision by Treaty 8 Grand Chief and leader of the Tallcree First Nation’s Tribal Government, Chief Rupert Meneen. That vision was to host a National Gathering of Elders (NGE) in Edmonton, a gathering that would bring First Nation, Métis and Inuit Elders together to talk not only about their respective cultures, experiences and traditions, but also to discuss the similar problems they face and the concerns they share for the future.

The September 11-14 event had a powerful opening ceremony that featured impactful and moving addresses by several First Nation and Metis leaders. The event also introduced a number of activities, including a Parade of Nations, three Intertribal Showcases that focused on First Nation, Métis and Inuit culture, tradition and entertainment, a film about Missing and Murdered Indigenous Women and Girls, a tour of Fort Edmonton Park and an opportunity to participate in a Sweat Ceremony. Throughout the course of the gathering everyone who attended was able to take advantage of the many Holistic Wellness sessions being offered by experienced practitioners.

The focus of the four-day gathering was to identify and discuss possible solutions to some of today’s major concerns and come up with initiatives that will enable all of Canada’s Indigenous peoples to move forward together in positive and meaningful ways. Five different Elders’ Forums provided the venue with both general conversation and meaningful dialogue on Reconciliation, Climate Change, Revitalization of Culture and Language, Indigenous Health and Missing and Murdered Indigenous Women and Girls. Each forum was presented by panel members representing the First Nation, Métis and Inuit peoples; once the five sessions were completed keynote speakers delivered their findings to the gathering. 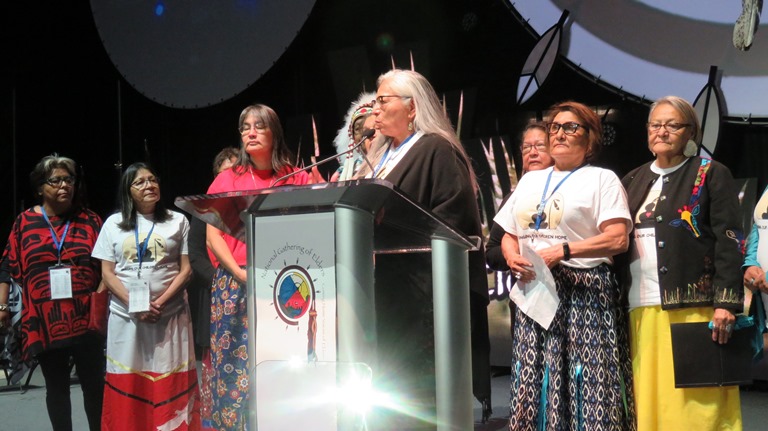 NGE Grandmothers’ Council spoke about the importance of understanding and positive communication.

The GCM arrived on the first day of the gathering, “and we have met and talked to hundreds of people and participated in the various forums. All of the topics embraced in the forums today are areas of concern to all of our communities, our families and especially to our children.”

One of the biggest areas of concern for the Council is the flagrant disparity found when comparing child care and the child welfare system in the Indigenous community versus the non-Indigenous community. The group urged others attending the gathering to get involved in making a difference in their communities.

“Manitoba also leads the country on newborn apprehensions with an average of 30 to 40 babies taken every month – and that’s from just from one of Winnipeg’s hospitals. That’s about 400 babies every year that are taken from our mothers, from our families and from our communities. Elders have said this is worse than the Indian Residential Schools; it’s a billion-dollar industry. Most shocking is the fact that from 2011 to 2016 a total of 304 children died while in the care of child welfare services.”

The Grandmother’s Council wants the province to take meaningful action by first investigating the flaws in its current system, and then revamping the entire ministry while providing Indigenous women and their families with the resources they need to succeed. The Council noted that inclusion, communication and participation by Indigenous families and communities is a prerequisite to meaningful change.

“We invite grandmothers to join us because these are our children,” stated the Elder.

“We need to bring our children home; they are our future. Without our children we have no future. We have a sacred responsibility as grandmothers and caretakers of our homes, our families and our home fires to do something about it.”

On September 13, 2007 the United Nations adopted the Declaration on the Rights of Indigenous Peoples. Treaty 6 Grand Chief Wilton Littlechild, a major proponent of that Declaration, was scheduled to offer a keynote address on Reconciliation after hosting the NGE panel with Phyllis Googoo (First Nation), Susanne Calliou (Métis) and Jean Gruben (Inuit).

Dr. Littlechild left for the United States to attend a ten-year anniversary gathering supporting the UN Declaration and Alexis Nakota Sioux First Nation Chief Tony Alexis took his place on the podium and offered highlights from Tuesday’s Reconciliation Forum. He recognized the work that Tallcree Nation Chief Rupert Meneen and his wife accomplished while getting ready to host the biggest gathering of Indigenous Elders ever held in Canada, and thanked the Elders for the ongoing work they do to bring improvement to Canada’s three distinct Indigenous communities. 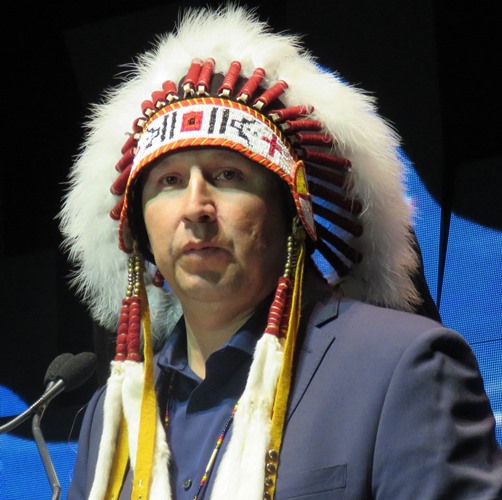 Chief Alexis spoke about the Reconciliation panel session, noting that some Elders were visibility upset, even angry when the subject of residential schools came up, schools that were designed to split families and denounce Indigenous lifestyles, customs and traditions in a genocidal plot to eradicate/eliminate Indigenous peoples in Canada.

“Reconciliation is a hard word to swallow, but important. The impact of residential schools is felt throughout First Nations, Inuit and Métis communities across Canada. The lack of access to services for our health outcomes, the over-representation in the criminal justice system, the over-representation of children in care, intergenerational trauma, cultural loss and language loss all have a tremendous impact on our people.

“More than 7,000 stories were shared with the Commission (TRC). I had the opportunity to sit in on some of those and it was sad and difficult to witness. Our Elders, our knowledge keepers have to step up and tell those stories. They did that again today and the anguish continues, but we do this in the kindest way and from the bottom of our hearts and with the intent to begin healing ourselves, as individuals and as Nations.”

Elders participating in the Reconciliation Forum noted said they’d like to see all levels of government, Indigenous communities and all Canadians work together to implement the 94 recommendations set out by the Truth and Reconciliation Commission.

“We must acknowledge and push government at all levels to improve outcomes in programs. Reconciliation requires action to counter the negative impact of residential schools and work towards closing the gaps that exist in programs and policies. Elders and survivors have called for changes to education, language, culture, health, spirituality and justice. As our Elders pass away we lose connection to our languages and cultures; the residential schools stopped our Elders from passing their knowledge on to future generations. When an Indigenous language dies, there are negative consequences. Our Elders are once again calling on government to begin the immediate implementation of programs and policies to help our people heal from residential schools.” 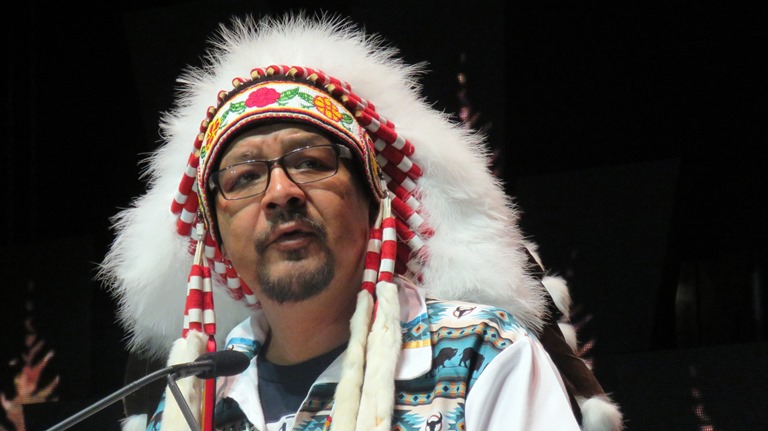 “Climate change is real,” assured Chief Hart, “and it is a problem that gives all great concern.”

One of the first things the Elders commented on was the fact that international governments sit at the table and talk about the Indigenous peoples’ platform on climate change, but they have no Aboriginal people at the table, something the Chief said “is just not right.”

He told the gathering that while on an international mission last year with Elder Francois Poulet,

World leaders sat and talked about the Indigenous platform on climate change “and yet they have never consulted our Elders, our experts, our hunters and trappers and gatherers of food and medicine. When I told elder Poulet that it wasn’t right for them to sit and talk about us when we were not at the table, he looked at me and said, ‘you are the Chief – lead the way.’

Chief Hart noted that “climate change is a real problem in our communities and we know that it is a real and serious problem yet some world leaders are still in denial and don’t believe it is a real issue of concern.

“Environmental change is impacting our lives and our traditional uses of the land; this needs to be addressed immediately because we are losing our connection to the land.

“There is hope, however, because I see many of our people returning to the land and they are taking their children and grandchildren with them to see the land we trapped on, hunted on, fished on and picked berries and medicines from. Many of our lakes and rivers are polluted and can no longer be fished; the water is no longer drinkable and the crops of wild berries are disappearing.

“Our way of life is being taken away because we are not involved, we are not consulted or included when it comes to discussion on climate change. There will come a day when our non-Native brothers and sisters will come back to us to save Armageddon. It is time for our governments to begin listening to us and to begin respecting our responsibilities as stewards and keepers of this land.”

In our November edition of Alberta Native News readers will learn what the moderators had to say on the remaining three Elder’s Forums held during the NGE event. This will include remarks from Métis Elder Elmer Ghostkeeper on The Revitalization of Language and Culture; Tanya Kappo on Missing and Murdered Indigenous Women and Girls and Marilyn Buffalo on Indigenous Health.

Click here to read the powerful opening remarks made by Indigenous leaders during theopening ceremony at the National Gathering of Elders on September 11, 2017.