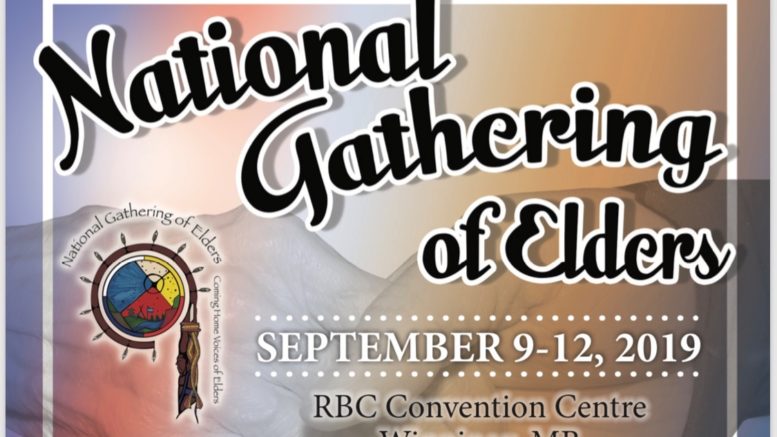 (September 11, 2019 Winnipeg, Manitoba in the Treaty 1 Territory) – Canadian Indigenous and non-Indigenous people arrived in Winnipeg, Manitoba in thousands from all directions for the National Gathering of Elders 2019 and organizers are appealing to all levels of government, corporate Canada and private donors to consider contributing to this historic and worthwhile event.

“The budget for hosting the event is 1.7 million dollars and we are approximately $400,000.00 short of our fundraising goal,” said NGE, Executive Director Dr. Judy Kim-Meneen.

The Gathering marks the second time in Canada’s history that elders and seniors from every region and Indigenous group will come together in the spirit of friendship and reconciliation. Building on the theme ‘Coming Home, Voices of Elders,’ the National Gathering of Elders will be a place for laughter and the sharing of culture, traditions, history, and an opportunity for the renewal and creation of long-lasting connections.

Treaty 1 Chief Glenn Hudson, the host First Nation for the Gathering said, “Council and I have reached out to our federal counterparts in Ottawa and are disappointed that, notwithstanding timely requests, continued efforts by NGE Kanata and Peguis First Nation the Government of Canada is not being responsive to requests for financial resources. We really hope that we’re not going to be left in the lurch like the Manitoba Government has done to us. In 2017, the National Gathering of Elders received support from the feds, we hope that has not changed”.

“We are hopeful that the federal government will consider the two separate sponsorship request that went into the Minister of Indigenous Services and Treaty Relations office in December of 2017 and December of 2018 and have been in regular communications with in this past year,” said Chief Rupert Meneen, Tallcree Tribal Government of Alberta who hosted the first Gathering, “in 2017 Indian and Northern Affairs Canada Alberta Region provide a contribution of $500,000 and the ask for this year is that they match the same amount.”

“In 2017, the answer and approval did not come until two weeks before the Gathering and I had hoped that Chief Hudson would not have to wait that long this year but it looks like they are still awaiting response from the federal government even though they had way more time to give an answer within the last two years, since the last Gathering.”

First Nations, Inuit, and Metis Elders from all across Canada, as well as youth and the general public have all been invited to this historic event. Planned activities include opening and closing ceremonies featuring a parade of Nations, health and wellness sessions, a tradeshow, and discussion forums on climate change, missing and murdered Indigenous women and men, revitalization of Indigenous languages and culture, and reconciliation. There will be an intercultural showcase featuring Indigenous entertainers, a talent show, and dance socials.