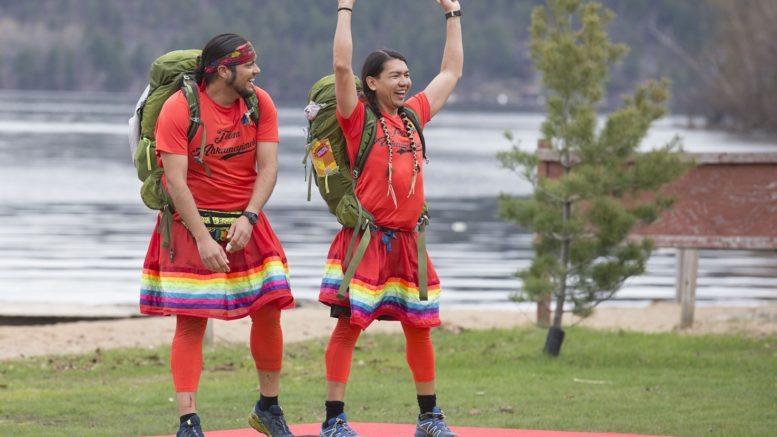 (September  2019) – After travelling across six provinces, one territory, 14 cities, and more than 20,000 kilometres, two-spirit married couple Anthony and James, from amiskwaciy-wâskahikan (Edmonton, Alta.), Treaty Number Six Territory, have crossed the Season 7 finish line of THE AMAZING RACE CANADA in first place – winning two All-New 2019 Chevrolet Blazers, a once in a lifetime trip for two around the world, a $250,000 cash prize, and the coveted title of THE AMAZING RACE CANADA Champions.

“We’re sharing this stage with all of those people who helped us along the way – our communities, our elders, our family members – and we wouldn’t be here if it wasn’t for them,” said Anthony Johnson and Dr. James Makokis to host Jon Montgomery upon arriving at the final Pit Stop of the season. “Throughout the Race, we met beautiful people and there are many friendships that we formed which will last a lifetime…we got to experience this beautiful land that we call our home.”

Now that they’ve been crowned the winners, the married couple told media that they want to use their fame to continue fundraising for a cultural healing centre in Alberta’s Kehewin Cree Nation. But first they’ll take a much needed vacation in the sun.

On the September 10, 2019 Season 7 finale, the final 3 teams raced to Muskoka, Ont., where they played a life-sized cottage trivia game, hosted by Jon Montgomery. Standing on a giant map of Canada and using two large foam dice to roll a number between 1 and 10, teams had to answer trivia questions directly related to the previous 10 legs of the Race – until they have answered a question from each leg. To make things even more difficult, teams that landed on a Roadblock, Detour, or Route Marker had to answer an additional question and wait a turn before rolling again.

Next, teams headed to Clevlands House, Minnet on Lake Rosseau, where one teammate was strapped to a hydro-powered Flyboard and had to master the extreme sport of hydroflying and successfully throw a bean bag into a target in the water – all while maintaining a minimum height of 15 feet above water and without falling. Then, teams made their way by boat to Rosseau Lake College, where they built an eight-foot tall Muskoka chair, without instructions, using only a miniature version as a reference. Racers then searched throughout Muskoka’s theme park, Santa’s Village in Bracebridge, for one of three elves carrying a candy cane with THE AMAZING RACE CANADA flag colours, and then had to deliver it to Santa Claus himself. Teams then visited Muskoka Lakes Farm & Winery, home of Johnston Cranberries in Bala, where they were challenged to carry a series of different pipes across a cranberry marsh and assemble the pipes into a working irrigation system.

Teams then made their final sprint to Camp Mini-Yo-We in Port Sydney to meet host Jon Montgomery at the finish line. Married Couple Anthony and James, from Edmonton, were first to arrive at the mat – winning the grand prize of two All-New 2019 Chevrolet Blazers, a once in a lifetime trip for two around the world, a $250,000 cash prize, and the coveted Season 7 title of THE AMAZING RACE CANADA Champions. Teammates Sarah and Sam, from Toronto, arrived second to the mat, followed by sisters Lauren and Joanne, from Regina, who came in third.

Anthony and James are positive role models for Indigenous youth in Edmonton and beyond. They met on Facebook after Anthony spotted James as the centerfold in OUT Magazine. When the two met in person, sparks flew and they married in 2017. They are both driven to be strong voices for their community. Anthony attended Harvard and holds a Bachelor’s Degree in Economics. His marriage to James, and subsequent move to Alberta, has given him a new lease on life. James has constantly dealt with the adversities in the medical industry related to being Indigenous. He knew he wanted to be a doctor since he was four years old; it took him longer to know that he wanted to focus on transgender health.

Both Anthony and James thought it was important to use the TV spotlight to raise awareness for Indigenous issues. In the show’s finale, they wore handmade skirts and a bandana to acknowledge missing and murdered Indigenous women.

“Representing missing and murdered Indigenous women was important because it happens; it happens, and people don’t talk about it,” Anthony said.

They also wanted to show two-spirit and transgender youth “that it’s OK to be different.

“If there’s two guys wearing a dress, they want to express their identity differently than the norm, then why does that matter? How is it hurting somebody else?” Makokis said.

“Because I have a large transgender population in my medical practice, and I see the results of social isolation, it sends a strong message when their doctor is saying that … and we wanted to do that. We thought it was really important.”

For more information on the other teams who competed on THE AMAZING RACE CANADA this season, viewers can visit CTV.ca/TheAmazingRaceCanada and search the team pages presented by Chevrolet. The site features team videos, bios, and exclusive content. As the go-to resource for THE AMAZING RACE CANADA fans, CTV.ca also includes full episodes. Additionally, ETALK will air exclusive on-the-road coverage tomorrow (Wednesday, Sept. 11) at 7 p.m. ET/PT on CTV.