by John Copley
(ANNews) – Thousands of Indigenous Elders, community leaders and members of Canada’s First Nations, Métis and Inuit communities are gathering this week from Sept. 11 – 14, at the 522,000 square foot Edmonton Exposition (EXPO) Centre to participate in the first-ever National Gathering of Elders. This monumental and historic undertaking began with a vision by Tallcree First Nation Chief Rupert Meneen, Grand Chief of Alberta’s Treaty 8 First Nations.
“The focus of this unique undertaking,” noted Chief Meneen, “will be to make everyone feel welcome and to create opportunities for sharing our cultures and perspectives and fostering good relations with all Indigenous peoples from across the nation. Our Elders hold, in their collective memories, the true history of Canada and its Indigenous peoples. Our Elders were integral to the survival of the European settlers as well as their allies in times of war.
“As Canada takes time to celebrate 150 years, we call on all Canadians to recognize not only the valuable contributions of Indigenous peoples but also the huge toll that colonization has taken on the Canada’s Aboriginal population. As a Cree person, a First Nation person and a community leader, I’ve called on many Elders for their counsel on many different occasions over the years. The words of the Elders are invaluable and I hold them all in high regard.

“This gathering will give us the opportunity to show our Elders that we honour and cherish them, that we value their words and their teachings and that we honour their legacy and their resilience.”

Following the spectacular September 11 Parade of Nations Grand Entry, the large audience of participants and spectators heard from more than a dozen Chiefs, Elders, government representatives and members of the Elders Advisory Council who addressed the gathering and spoke about what they hope to achieve during the four day event. 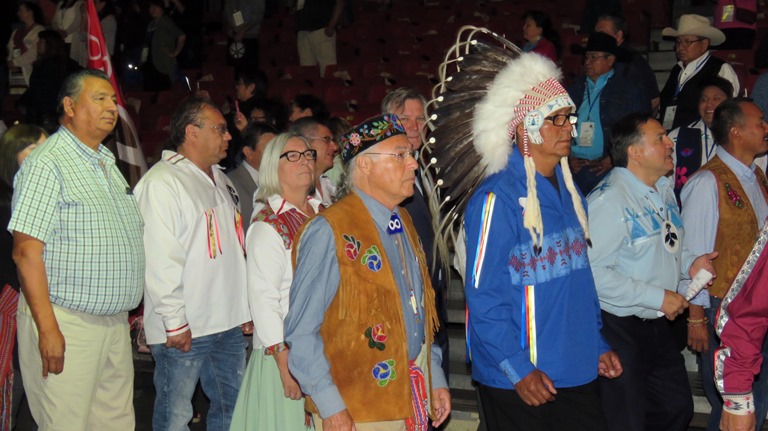 A full story will appear in both the September print edition of of Alberta Native News and at albertanativenews.com. 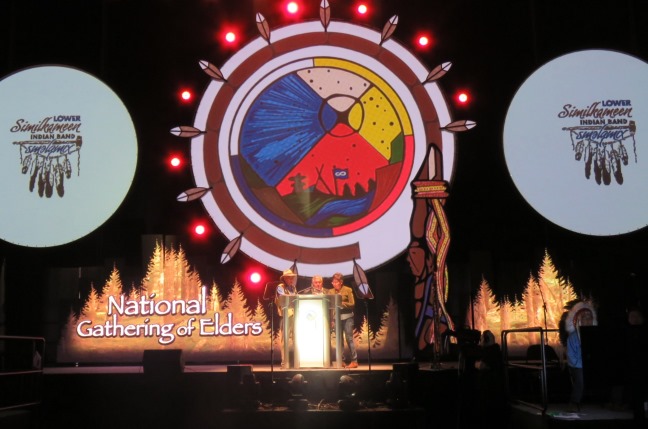 Emcees Tom Ghostkeeper and George Tuccaro and Event Organizer Ann Gladue-Buffalo prepare for the opening of the National Gathering of Elders.