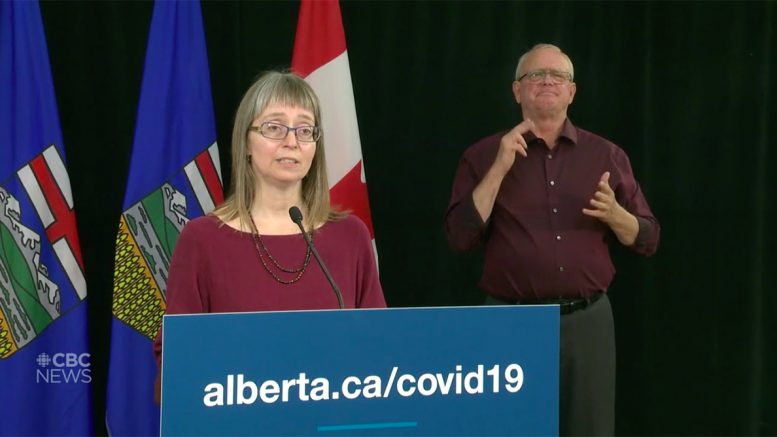 Dr. Deena Hinshaw urges Albertans to continue to follow health and safety guidelines to reduce the spread of COVID-19 - wash your hands, wear a facemask, limit your contacts and keep your distance from others.

(ANNews) – The Siksika First Nation has acted quickly, transparently and proactively to control spread of the COVID-19 virus.

In early July, 2020 Chief of the Siksika First Nation, Ouray Crowfoot, said in a COVID-19 update on Facebook that current COVID-19 testing numbers indicated they had 21 known COVID positive cases with links to Siksika.

“As of July 1, we have 258 Siksika Nation members under active investigation and daily follow up by the health service team. This number has more than quadrupled in the last three days.” Chief Crowfoot continued, “The health service team has identified 5 new, unrelated case clusters within the last 12 days. Each new case cluster makes it more and more challenging to contact trace and isolate individuals fast enough to contain the spread.”

“The risk is high of community transmission on Siksika Nation.”

A day later, July 3, the Siksika Nation released a memo enacting a curfew from 11pm to 5am.

The Nation released their COVID data on July 6 which explained that out of the 973 Siksika members tested, 22 of them tested positive, with 12 of them having already recovered. However, this data did not stop fears about the spread of the disease.

On July 14, 2020 it was then reported that members of the Siksika First Nation were denied service to local businesses because of the spike of cases appearing in the Nation.

Alberta’s Chief Medical Officer, Dr. Deena Hinshaw, received these reports and mentioned them in her daily COVID update on Tuesday. “I have received reports that some Siksika First Nation members were recently denied access to local businesses as a result of recent cases being reported in their community,” Hinshaw said.

“This is not the first time that we’ve heard such reports around COVID-19. I know that Albertans of Chinese or other ethnic heritage and some religious groups have also at times been singled out and discriminated against. When the result of that prompt and transparent action is stigma against their members, it sends a message against transparency and risks discouraging people from being tested or co-operating with public health,” she continued.

That same day, Siksika said in a Twitter post thanking Dr. Hinshaw, “Thank you @CMOH_Alberta for advocating for Siksikawa today. We will fight stigma with kindness. We continue to proactively respond to COVID-19 in our community while showing compassion to those surrounding communities.”

As of July 15, 2020 the Siksika First Nation has completed 2652 tests, which show that there are only 6 active cases now on-reserve, with 21 confirmed cases having recovered.

Premier declares Alberta is in a public health emergency