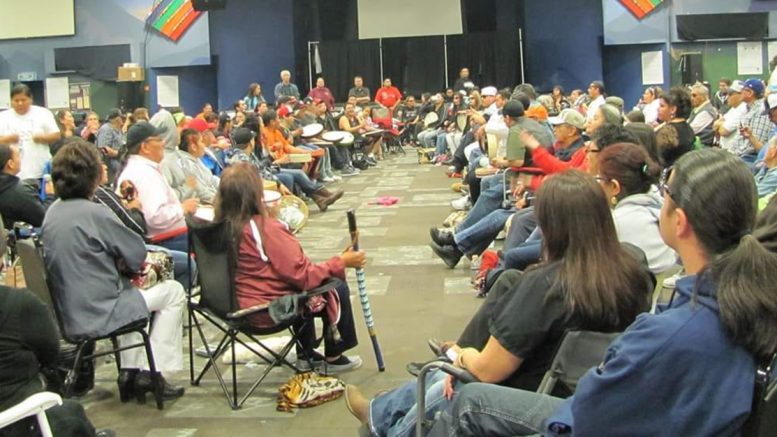 (ANNews) – Powwows have been cancelled across Turtle Island due to gathering restrictions related to COVID-19. Dancers and drummers are missing the powwow trail and so are hand game and stickgame players.

A stick game is a traditional game where two teams battle each other for all the sticks (which are points) while songs are sung. For those who are not familiar with it – “Stickgame is not a game like basketball or football, it is more like chess. It is a battle of wits. As for the more specific parts of the game, you will have to play it one day, as I find that is the best way to learn.”

I spoke to stick game player, Lyndon Scott, on what he did to combat the cancellations.

“Stickgame has been a part of my life since I was a baby. I travelled with my parents everywhere and started singing when I was 4 years old and to this day I still remember the first song I ever learned. I miss the visiting with friends and family who I don’t get to see during the winter months and of course I love singing,” Lyndon said of his love for stick game. “I miss it a lot.”

In order to keep stick game alive during the pandemic, Lyndon created the Facebook page, ‘The Healing Songs of Stickgame.’ It features videos from Indigenous people across the continent sharing stick game songs.

“The page is for people to post stickgame songs. We’ve had some post their songs when they lose a loved one, when they are missing someone – a lot just want heal themselves by singing with whatever ails them – and some post because they love to sing.”

“I made the page in March, but didn’t know how to get it started,” Lyndon said. “I made the page because a lot of people use the songs as healing, as I do. When you hear a song it reminds a person of someone they lost or miss.”

The page, while primarily being an outlet to share stick game songs, also hosts online singing contests. “An elder approached me and asked if there was a way to have a singing contest online,” Lyndon continued. The contests are for cash prizes and are made possible by donations.

“A lot of donations for the singing contest came from people who don’t play stickgame, but hearing the songs reminded them of a lost brother sister parent grandparent best friend who use to play,” Lyndon stated.

Since the first contest, ‘Healing Songs of Stickgame’ has now grown to encompass almost five-thousand people who all celebrate the music of the traditional game.

“When I started the page I only expected 100-200 people to join, but we passed that in the second day,” Lyndon said of his initial expectations for the page. “We hit 1500 people by end of first week and then climbed to 3000 when the contest was on. Now it sits at just over 4500 with people still joining every day.

“We have people from Thailand, New Zealand, Germany, Hawaii, the USA, and Canada messaging me about the songs and game. I don’t even know 4500 people so it is a surprise of how much it grew.”

To find out more about the music of stick game, you can visit ‘The Healing Songs of Stickgame’ on Facebook.