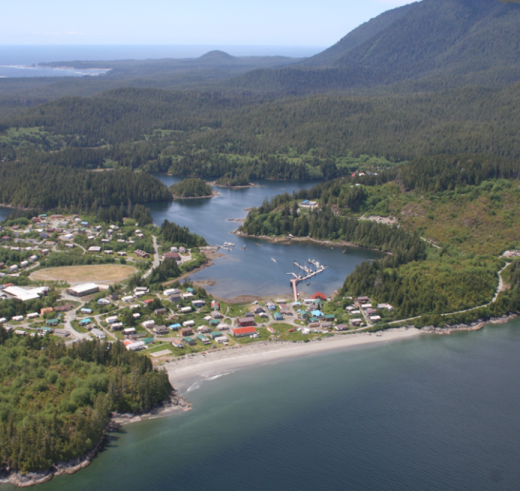 (TOFINO) — On January 25, 2017, the Ahousaht First Nation released the first phase of their long-term sustainable economic development plan for their hahoulthlee (territory) in Clayoquot Sound. The event was held in Tofino, BC at the Shore Unit 9 Event space 360 Main Street Tofino from 1-3 p.m.

The first phase is a marine and land-use vision that supports Ahousaht’s vision for diverse, long-term economic development. “The economic sustainability of our community must be underpinned by sustainable marine and land use planning and that is where we are starting today,” said Ahousaht First Nation Chief Maquinna.

The release of this vision represents the culmination of over two years of work by the community, led by the Maaqutusiis Hahoutlhee Stewardship Society (MHSS), which represents the Ahousaht Hawiih (Ahousaht Chiefs). Chief Maquinna also voiced his appreciation to The Nature Conservancy Canada (TNC) for their technical support in reaching this point and their commitment to raise a stewardship endowment fund to support the implementation of their land use vision and the sustainable management and economic development in the region.

The Ahousaht believe that this is the beginning of a new era, based on recognition and celebration of Ahousaht people and culture, conservation of the world-class forest and marine resources of Clayoquot Sound, and the development of a more diversified, sustainable local economy, including community forestry.

In August 2016, the Ahousaht were honoured to welcome British Columbia Premier Christy Clark to their territory to sign a new relationship protocol, which was jointly announced by Ahousaht Tyee Ha’wilth Maquinna (Hereditary Chief Lewis George), elected Chief Councillor Greg Louie and Premier Clark. The agreement between Ahousaht and B.C. will bring $1.25 million to Ahousaht over five years to support economic development and to establish a collaborative approach to resource management and permitting within our traditional territory.

Ahousaht Chief Councilor Greg Louie commented: “We look forward to building on the strong relationship we have established with the Government of British Columbia to advance economic prosperity that respects traditional Ahousaht values. Our people are ready to create local, family-supporting jobs through renewable energy, respectful tourism and sustainable resource development.”

Hereditary Chief Shawn A-in-chut Atleo expressed his support for the vison: “The community values expressed during the planning process reaffirmed our traditional teachings that the Ahousaht people are inextricably linked to the natural world that we refer to as our hahoulthlee. This bold vision brings certainty to the future of old growth forests and ensures functioning marine and aquatic ecosystems into the next millennia. It is a proud day to be Ahousaht.”

TNC Canada Executive Director Hadley Archer offered his congratulations: “When Ahousaht invited TNC Canada to support their land-use planning, we could only hope that it would become what it is today — a blueprint for a sustainable future rooted in sacred cultural values and protective of a globally significant ecosystem. We look forward to continued work with the Ahousaht and other Nations in building thriving, local economies.”

Chiefs Atleo and Maquinna also voiced their support to their neighbouring First Nations, Tla-o-qui-aht and Hesquiaht, as they embark on similar planning processes for their traditional territories and look forward to developing shared boundary accords as they progress.

Representatives of the Clayoquot Sound Conservation Alliance (CSCA) (comprised of Greenpeace, Friends of Clayoquot Sound, Sierra Club BC, STAND.earth and Wilderness Committee) were present to support and congratulate the Hawiih for their initiative.

“The Ahousaht Land Use Vision steps up to meet the environmental and social imperatives of the 21st century with solutions for rainforest conservation and community benefits within their famous territory, located in one of the most beautiful and ecologically rich landscapes in the world,” said Valerie Langer of Stand.earth (formerly ForestEthics), a member of the CSCA.

Under the Land Use Vision about 80 per cent of Ahousaht territory will be set aside as cultural and natural areas, “to conserve biological diversity, natural landscapes and wilderness, and to provide for Ahousaht continued spiritual, cultural and sustenance use.”

Visit www.mhssahousaht.ca to read the Land Use Vision.