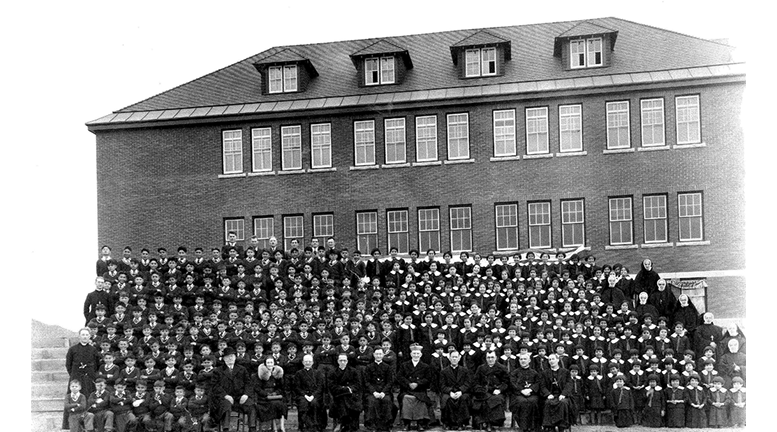 (ANNews) – In 2015, the Canadian government led by former prime minister Stephen Harper agreed to “forever discharge” the Catholic Church from its obligations under a $25-million settlement agreement for residential school survivors and agreed to pay the Church’s legal bills, according to documents obtained by The Canadian Press.

Through an access to information request, CP obtained a signed copy of the agreement, marking the first time it’s been publicized.

“That’s a very, very important set of records,” Ry Moran, an associate librarian at the University of Victoria and founding director of the National Centre for Truth and Reconciliation, told CP.

“Like all questions around accountability, the question is who made the decision? How was that decision made? Who ultimately signed off on this?”

Indigenous leaders and legal experts have previously questioned why the Canadian government gave up on an appeal of a 2015 Saskatchewan court decision that the Church would no longer have to pay its remaining obligations under the 2006 Indian Residential Schools Settlement Agreement.

Since the uncovering of thousands of suspected unmarked graves began in the summer of 2021, the Church and federal government have received renewed scrutiny.

The residential schools settlement obligated 48 Catholic entities in Canada to pay $79 million to survivors, which was divided into three parts, including a requirement that they make “best efforts” to raise $25 million for survivors.

The question was whether lawyers for the feds and Church had struck a deal freeing the Church from all its financial obligations in exchange for a $1.2-million payment, or whether that had applied only to a specific part of the settlement agreement.

Saskatchewan Justice Neil Gabrielson ruled that agreement covered all of the Church’s obligations, which allowed it to abandon its fundraising for survivors after raising just $4 million.

The documents obtained by CP show that a month after the July 2015 ruling, the feds had filed a “protective notice of appeal” while negotiating a final release agreement with the Catholic entities.

By October 2015, that final agreement had been signed by the deputy minister of the day for what was then known as the Department of Aboriginal and Northern Affairs.

“Canada does hereby remise, release and forever discharge the Catholic entities, its directors, officers, shareholders, agents, lawyers, and employees, of and from all manners of actions, causes of action, suits, debts, dues, accounts, bonds whatsoever against the releasees,” the document says.

“Canada further covenants and agrees not directly or indirectly to join, assist, aid, or act in concert in any manner whatsoever with any person or entity in making any financial claim or demand whatsoever against the releasees.”

The documents in question were released as part of more than 200 pages of briefing documents and court records prepared for Indigenous Relations Minister Marc Miller, who has committed to getting to the bottom of why the Church was released from its obligations.

Miller has floated the idea of reviewing his predecessor’s decision.

But the wording of “forever discharges [emphasis added]” would make it difficult for the government to follow through.

The obtained documents suggest the decision on whether to appeal depended on whether the Catholic entities would also use it as a pretext to relieve itself of the agreement’s non-financial obligations.

“Should discussions around the order result in a release that is limited to three financial obligations, Canada will not pursue the appeal,” reads a document dated September 2015 — a month prior to the election that brought Prime Minister Justin Trudeau to power.

The document also noted that releasing the Catholic entities from their non-financial commitments “could pose significant risk for Canada.”

While acknowledging the agreement would free the Church from its $21.5-million fundraising “shortfall” for survivors, “the likelihood of compelling the Catholic entities to meet their remaining fundraising obligations is very low.”

Ken Young, a former regional chief at the Assembly of First Nations and a residential school survivor, told CP he thinks it’s unlikely Canada would have succeeded in an appeal.

“Canada could have litigated until the cows came home,” he said. “I think we’re in a new phase.”

He said the problem was the settlement agreement relied on the Church’s “best efforts” to fundraise, rather than the fundraising’s outcome.

Young said it appears Church leaders have since learned their lesson, pointing to a promise the Canadian Conference of Catholic Bishops made in September 2021 to raise $30 million over five years for survivors. So far, just $4 million of those have been raised.

While Young said he believes the Church will match its fundraising goal, he questions why institutions as wealthy as the Vatican and Catholic Church need to fundraise.

“Write a cheque today, never mind bothering your parishioners to raise it,” he advised.