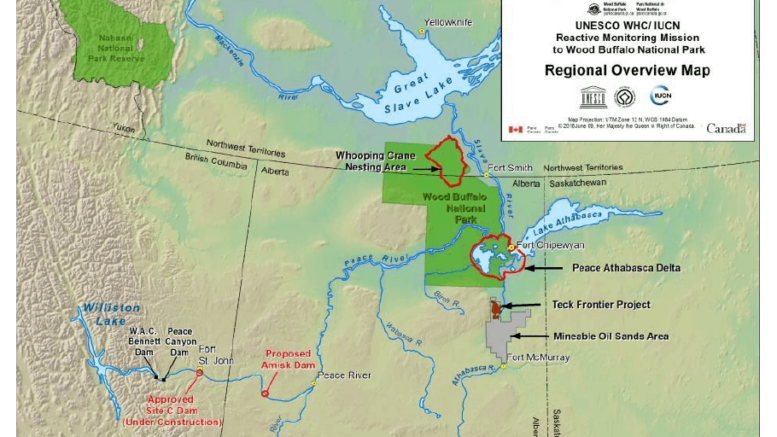 (ANNews) – A UNESCO World Heritage Committee Reactive Monitoring Mission is in Alberta this week to evaluate the country’s progress in protecting and restoring the deterioration of its largest National Park, Wood Buffalo National Park.

The World Heritage Committee will also recommend whether Wood Buffalo National Park should become be added to UNESCO’s List of World Heritage Sites in Danger.

Chief Powder said he is grateful UNESCO is sending experts to examine progress and that it couldn’t be more timely.

While in Canada, the Reactive Monitoring Mission is examining Canada’s progress in halting the deterioration of the Peace Athabasca Delta, managing risks from oil sands tailings, and implementing the 17 recommendations UNESCO endorsed in 2016.

The only World Heritage Site in North America with that designation is the Florida Everglades.

“We appreciate the efforts of many levels of government to support the Wood Buffalo National Park Action Plan,” said Melody Lepine, Director of Mikisew Cree Government and Industry Relations.

Lepine said that the Peace Athabasca Delta is still at great risk because of management decisions made upstream. Fixing this situation requires a huge level of commitment from multiple levels of government, and an all-hands-on-deck effort, creativity, sustained funding, and a willingness to take the bold actions needed to tackle upstream issues.  They are confident this reactive monitoring mission will thoroughly evaluate how Canada is doing in those areas.

The Wood Buffalo National Park World Heritage Site is home to the Peace Athabasca Delta, one of the largest freshwater deltas in the world. In 2014, Mikisew Cree First Nation sounded the alarm to UNESCO’s World Heritage Committee after mounting evidence that the effects of decades of hydroelectric projects, oil sands development and climate change had put the Peace Athabasca Delta and other areas of the park in grave jeopardy. After confirming the gravity of these threats in a 2016 investigation, the World Heritage Committee has repeatedly called on Canada to take urgent and effective steps to save this important area.

Under pressure from industry, both Alberta and Canada have recently considered establishing effluent release regulations that would, for the first time, allow oil sands process affected waters to be purposefully put into the Athabasca River. At the same time, tailings volumes continue to increase, and Alberta’s management framework for tailings is overdue for reform. The volume of tailings in ponds in the Athabasca Oil Sands Region upstream of Wood Buffalo National Park is staggering – enough liquid tailings to fill 544,000 swimming pools. Yet, there is less money in financial security to cover its reclamation than five years ago when UNESCO raised concerns about threats from tailings ponds for this World Heritage Site.

“We hear a lot of talk from governments about protecting our country’s freshwater resources, protecting biodiversity for future generations and advancing reconciliation. Wood Buffalo National Park puts all of that to the test for Canada,” said Chief Powder.

He explained that healing this watershed means that different jurisdictions must work together, enhancing efforts to find creative and bold solutions and getting real commitments to advance key actions. Mikisew is grateful that UNESCO takes these issues so seriously, concluded Chief Powder.