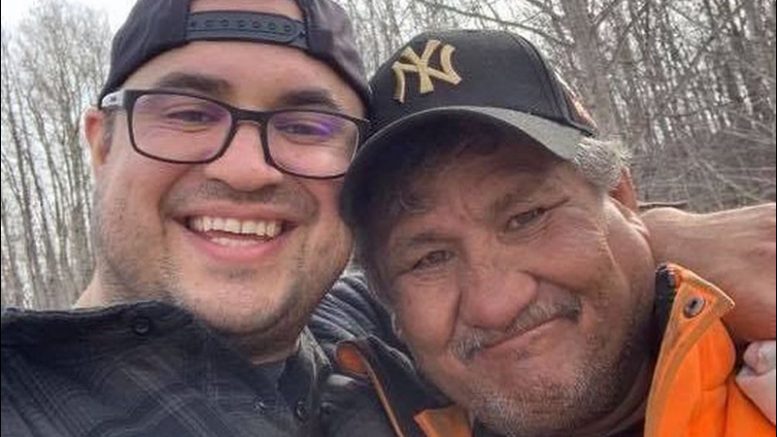 (ANNews) – Roger Bilodeau, who was found guilty of two counts of manslaughter in June for his role in killing Metis hunters Maurice Cardinal and Jacob Sansom, has been sentenced to 10 years in prison.

Bilodeau’s son, Anthony, was found guilty of one count of second-degree murder for the death of 57-year-old Cardinal and one count of manslaughter for 39-year-old Sansom, who was Cardinal’s nephew. Anthony’s sentencing hearing is scheduled to begin November 17, the Edmonton Journal reported.

Both father and son were charged with second-degree murder, but in a murder case a jury is able to convict on manslaughter if they don’t think there’s sufficient evidence to convict on murder.

The one-day sentencing hearing heard legal arguments from the Crown and defence, as well as victim impact statements from Cardinal and Sansom’s families, APTN News reported.

“All I needed to hear from that judge was exactly what we knew all along,” Jacob Sansom’s widow Sarah said after the sentencing. “Those boys were innocent. To me that means more than the one-year sentence. The judge knew they were innocent and now the family knows.”

Sarah Sansom was responding to the defence’s line of questioning throughout the trial about how much the hunters had been drinking, which the Crown successfully argued was irrelevant to their killings.

On March 27, 2020, Anthony Bilodeau received a call from his father and younger brother, who were pursuing a white Dodge pickup truck they had suspected was on their rural property earlier in the day, court heard.

Roger Bilodeau’s son, Joseph, who was not charged with a crime, told his father that he saw a white pickup truck on their property earlier in the day. Roger began following the truck, which Cardinal and Sansom were in, when it stopped on the family farm. Cardinal and Sansom had been hunting in nearby Glendon.

At one point in the pursuit, the Bilodeaus reached a speed of 150 km/hour, court heard.

Almost immediately after arriving on the scene, Anthony Bilodeau shot Sansom in the chest, and then Cardinal three times in the back. They left the victims to die at the side of the road without calling an ambulance or police, and destroyed the gun used in the killing.

The Crown asked for a life sentence due to Bilodeau’s high moral culpability in what they described as a “near murder” and a case of vigilante justice.

Bilodeau’s behaviour began a chain of events that directly lead to the Cardinal and Sansom’s deaths, the Crown contended.

The Crown, however, didn’t explicitly argue that race was a factor in this case.

The sentencing hearing heard that many of Cardinal and Sansom’s family members are dealing with post-traumatic stress due to their kins’ killings.

“I am afraid to pull over on the side of the road to take a coat off,” said Irene Forsyth — a relative of Cardinal and Sansom.

Sansom’s mother and Cardinal’s sister, Ruby Smith, questioned why anyone “would shoot the kindest men in the world and leave them by the side of the road like animals.”

“I cannot forgive what you did; I am so broken, and my soul has been shattered,” added Smith, who said she would have liked to see both Bilodeaus convicted of murder.

Smith also questioned the Bilodeaus’ “cold-hearted decision” not to attempt to save Sansom and Cardinal, CBC News reported.

In a statement read in court, Bilodeau claimed he “did not intend to hurt anyone” and that he “prays for these lost souls all the time.”

Sarah Sansom said his statement “was the first time we have seen remorse out of any of them.” She expressed desire to see Anthony Bilodeau sentenced to life in prison.

Forsyth was less charitable in her interpretation of Bilodeau’s remarks.

“I don’t know what he meant by ‘lost souls.’ “It was a poor choice of words. If anyone is lost, it is him,” she said.

According to the CBC, Sarah Sansom outlined the impact on her and Jacob’s three children, who she said rarely leave the house now. She said whenever she leaves the house, her son calls her every 15 minutes to make sure she’s not in danger.

“It’s caused a complete explosion of our lives and family in a way we can never recover,” Sansom said.

Jacob’s sister, Gina Sansom, called the killers “thieves of our happiness and joy.”

“You were the only thieves present that night and in the courtroom today … You stole so much in just a few moments,” she said in reference to the Bilodeaus’ suspicion Samson and Cardinal were going to rob them.

After Anthony and Roger Bilodeau’s convictions, the Metis Nation of Alberta called the case a “stark illustration of the discrimination and contempt experienced by many of our Citizens especially in that area of the province.”

Brian Beresh, Roger Bilodeau’s defence lawyer, dismissed allegations of vigilante justice as “wild speculation”, adding that Roger asked Anthony to bring a gun, but not to have it loaded.

Bilodeau received extra credit for time served in pre-trial custody, due to COVID restrictions that saw him spend no more than two hours outside daily for 415 days in remand, amounting to 4.5 years knocked off his 10-year sentence.