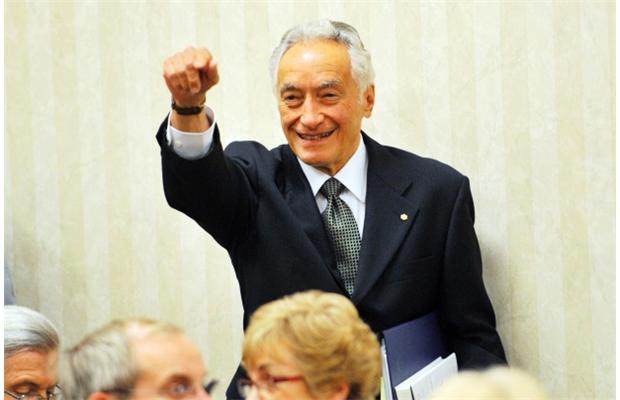 EDMONTON JOURNAL – As always, Mel Hurtig is blunt when explaining the reasons for writing his latest book, an unbridled attack on Prime Minister Stephen Harper.

“My goal in writing this is to get rid of Harper — before he destroys Canadian democracy,” the former Edmonton book seller, publisher, and well-known provocateur in Canadian politics told the Journal.

Hurtig, 82, took a close interest in the recent Alberta election with its surprising NDP victory and maintains close ties with his hometown through the University of Alberta’s annual Hurtig Lecture.

Whether the provincial Tories’ shocking drop to nine seats has any significance for the federal election this fall is very hard to say, says Hurtig, author of seven other books, including the Truth About Canada and The Vanishing Country.

But he’s certainly counting on his book, The Arrogant Autocrat, Stephen Harper’s Takeover of Canada, to influence the federal campaign.

Hurtig contends democracy has been under attack by Harper since 2006 — from muzzling scientists to Harper’s now infamous manual to MPs on how to disrupt parliamentary committees, omnibus bills and audits of long-standing charities.

Click here to read more of the article by Sheila Pratt in the Edmonton Journal.