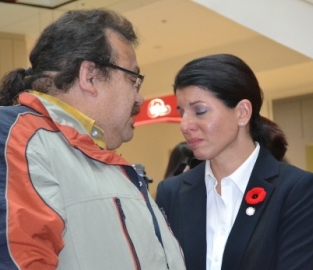 Several hundred people gathered in support of Elder Gary Moostoos at City Centre Mall the afternoon of November 8. An Idle No More style rally was held with a flash mob rob dance that coincided with a public apology from Oxford Properties. The apology stemmed from the mistreatment and removal of Moostoos from the food court of the mall last month in which he believes was an act of racial profiling.

The incident garnered national attention and opened up conversations around racism against Aboriginal people in Canada. 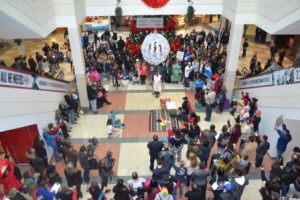 A heartfelt public apology was offered to Elder Gary Moostoos but he wisely deferred the apology until he sees a real demonstration of improved relations.  Article and photos by Brandi Morin

The mall’s general manager Olympia Trencevski spoke on behalf of Oxford and was visibly emotional.

“Mr. Moostoos, I want to look into your eyes and I want to tell you from my heart to yours that I sincerely apologize for hurting your feelings,” she said. “I’m sorry for what happened to you. It was unacceptable. It was a mistake.”

She went on to apologize to the Aboriginal community at large for the pain they also may have felt.

“I want to work with you if you’ll let me and if you’ll be my guiding light to making this right. We have a lot to learn. We are just scratching the surface here.”

Although Moostoos said he appreciated the apology, he could not at that time accept it until he sees more action taken for it not to happen again.

“I need to stand up and say I will not take the treatment that we as Aboriginal people have taken for so long. We need to take action rather than reaction and today, now, is the time to start working on something.”

Following the exchange both Moostoos and Trencevski stood side-by-side and held hands while an honor song was sung.

Click here for a news item  by Brandi Morin about the incident and a related editorial by John Copley on systemic racism.