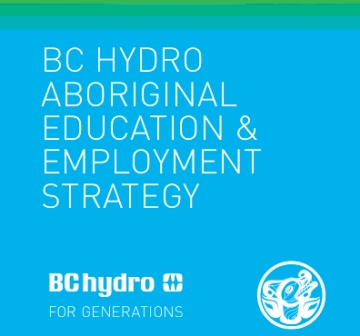 Canada’s Aboriginal peoples want to share in an equitable future with the rest of the country and for several decades have been utilizing every resource available to see that that vision eventually becomes a reality. Though the journey has been arduous and the obstacles ever-changing, that quest is slowly but surely being realized, thanks in part to the collective efforts of Canada’s Aboriginal leaders and achievers, who along with many supportive institutions, organizations, corporations and industries, are paving the way and leading by example. B.C. Hydro is one of those making a positive difference in the lives of Aboriginal people and the communities they call home.

In August 2006 the BC Hydro Executive and Board of Directors approved a 10 year Aboriginal hiring  initiative. The Aboriginal Education and Employment Strategy (AEES) was created to support recruitment and the development of education and training programs to build the capacity of Aboriginal talent pools for BC Hydro and B.C. more broadly. The strategy aligns with BC Hydro’s commitment to develop a diverse and inclusive workforce that represents the communities they serve within the province. The initiative is paying dividends today as more and more Aboriginal workers step up to face the challenges necessary to succeed in today’s ever-changing world. 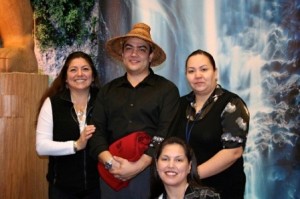 When AEES marked its seventh anniversary last year the AEES team, which includes Jeannie Cranmer, AEES Manager; Valerie Monkman, AEES HR Advisor; and Melanie Woods, AEES HR Analyst, had recruited and supported more than 240 Aboriginal employees; that number has since grown to almost 300. Some of the work is seasonal and some of the workers move on to different career opportunities so the number of Aboriginal workers fluctuates but is maintaining steady growth.

“Our goal,” explained Cranmer, “is to support BC Hydro’s commitment to develop a workforce fully representative of the B.C. labour market by 2017, and to continue to foster an inclusive workplace.”

The AEES team provides specialized expertise to source and recruit Aboriginal talent throughout the province and in the process has introduced and supported hundreds of new Aboriginal hires at BC Hydro that include Youth Trades, Trades Trainees, Apprentice Power  Line Technicians, Cable Splicers, Mechanics and Key Account Managers. They’ve also supported dozens of boot camps, travelled to many schools where they promoted education as the key to employment, established the Aboriginal Trades Training Bursaries, supported students through Work Placement Programs and much more.

The Aboriginal Education and Employment Strategy is a multi-faceted endeavour that recruits, supports and develops internal initiatives that give potential employees every opportunity to succeed. The Youth Hire Program, for example, is a seven week introduction to the trades.

“Twenty youth are hired each summer,” explained Cranmer, noting that to date about 100 Aboriginal youth have been hired through the program, including a dozen who’ve advanced to apprentice training programs, including nine trades trainees, two of whom are now apprenticing as mechanics, another as an engineer-in-training. More than half of BCHydro’s Aboriginal employees are involved in skilled trades, technical and engineering careers and as apprentice power line technicians, electricians and mechanics.

The Stay-In-School Program is another major accomplishment. Created though Impact Benefit Agreements negotiated with First Nations, the agreements support capital projects and stay-in-school initiatives for elementary school children, and high school upgrade programs in math, science and English, as well as tutoring and mentoring and career preparation programs.

RAIN is another example of a successful AEES initiative. Acting in the role of an Aboriginal employee network, RAIN is the acronym for Respectful Aboriginal Inclusive Nucleus (Network).

“As a result of our hiring success,” noted Cranmer, “we now have a critical mass of Aboriginal employees; they formed RAIN as a forum for Aboriginal employees to come together. Last year RAIN hosted a National Aboriginal Day event at BC Hydro highlighting our food, culture and dance as a way of increasing Aboriginal awareness within our workforce.”

Jeannie Cranmer said that AEES is successful in part because of BC Hydro’s commitment to working with Aboriginal communities. The corporation believes that its success “depends on Aboriginal communities being healthy and whole. Where First Nations’ priorities are health, wellness, education and social programs, BC Hydro may not have the capability to perform this work, so we build partnerships with other organizations that can, such as Minerva and Roots of Empathy.”

The three other key components that contribute the success of the AEES strategy are recruitment, capacity development and Aboriginal awareness. In an interview earlier this year with columnist Markham Hislop, Cranmer noted that one of the biggest challenges facing AEES is a shortage of workers because of the growing demand throughout the industrial sector.

“It’s a very competitive market; skilled trades people are in demand,” she said. “We lose some professionals to other opportunities, but the door is never closed and they can always come back.”

“With an overall goal of becoming an employer of choice for Aboriginal talent and increasing Aboriginal representation in our workforce,” assured Cranmer, “the AEES team works to educate, support and make visible the wide variety of career opportunities for Aboriginal peoples at BC Hydro, including skilled trades, technicians, engineers and more.”

Capacity Development, she noted, is created by “extending our reach outward, creating partnerships that build capacity and opportunity for Aboriginal applicants in the labour market, including direct employment at BC Hydro – as well as contract opportunities.”

Positive outcomes from these partnerships include such things as Utility Boot Camps, an initiative that offers training in First Nations communities. BC Hydro also maintains work-term arrangements with colleges across the province.

The last of the key components to the AEES success story is BC Hydro’s keen sense of Aboriginal Awareness, as is evident in the opening comments by past President and CEO Charles Reid and Aboriginal Relations Executive Director Donia Snow in the recently delivered BC Hydro – A Report to Aboriginal Communities.

“Building Aboriginal perspectives into our planning and operations is critical not only to designing business solutions that address the needs of Aboriginal communities, but also to building innovation into the industry,” they wrote. “To increase the Aboriginal voice in our company, we are establishing an external committee, the Strategic Aboriginal Engagement Committee. The role of this committee will not only be to provide advice on how we can build more effective relationships with Aboriginal communities but to provide us with their insights into our planning and operations across the company.”

Impact Benefit Agreements are another way that BC Hydro helps to enhance capacity in Aboriginal communities. Under these agreements BC Hydro works with First Nations on longer-term partnerships that address certainty to both BC Hydro and First Nations and provide tangible and sustainable benefits to First Nations. The We Wai Kai and Wei Wai Kum First Nations’ IBA, related to the John Hart project, provides both First Nations with a number of benefits, including training and education funds, economic development opportunities related to the construction of the project, and also wider involvement in BC Hydro’s watershed activities.

One of the examples of the benefits provided by the agreement is for the We Wai Kai and Wei Wai Kum to be more directly involved with BC Hydro in the preservation and enhancement of salmon stocks within the Campbell River system hydroelectric facilities.

In addition to signing numerous Impact Benefit Agreements with various First Nations (in relation to the corporation’s capital projects) BC Hydro has also achieved key agreements with the St’át’imc, Tsay Keh Dene and Kwadacha Nations. On April 9, 2011, the St’át’imc voted yes to a Settlement Agreement with the Province of British Columbia and BC Hydro that provides mitigation, compensation and an ongoing long term relationship to address their grievances related to the construction and operation of existing BC Hydro facilities.

BC Hydro and the St’át’imc had been negotiating an agreement since 1993. 2013 marked the second year of BCHydro’s long-term relationship agreement with St’át’imc, where progress has been made in the areas of contracting, education and training, and other key initiatives, including environmental and archaeological work.

In 2010 corporation executives joined the Tsay Keh Dene First Nation in their community to celebrate the signing of a final agreement which addresses the past, present and future impacts created by the construction and operation of the W.A.C. Bennett Dam and Williston Reservoir in northern B.C.

BC Hydro past President Charles Reid commented on the importance of developing and maintaining a viable working relationship with Aboriginal peoples.

For more information visit BC Hydro.